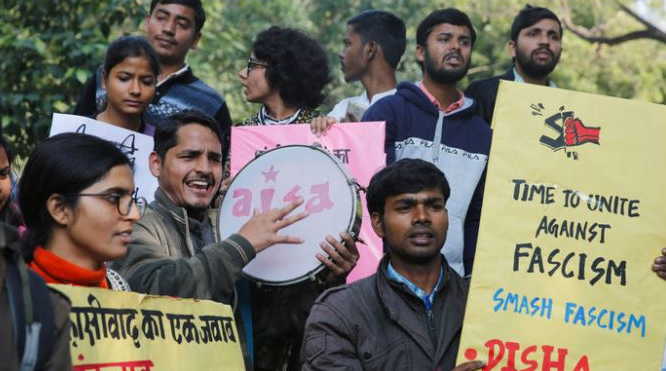 India’s prime minister, Narendra Modi has gone one step further in strengthening his Hindu nationalist regime. In August 2019, he moved to abolish the limited special rights of Jammu and Kashmir. Now, with the Citizens Amendment Act (CAA) and the National Register of Citizens (NRC), the government wants to take measures to deny Indian citizenship to Muslims.

The National Register of Citizens (NRC) is an extension of a measure that already exists in the north-eastern state of Assam. Citizens must prove that they themselves or their ancestors are Indian, if not they are threatened with persecution. In Assam, detention centers have been built with more planned to detain ‘illegal’ residents and hundreds of people have already been arrested. The measure threatens the lives of hundreds of thousands of people in Assam alone: a first list of people who were not recognized as ‘Indians’ contained 1.9 million names! This included many Muslims, but also Hindus.

An extension of this measure to the whole country will affect not just Muslims. A further amendment has been proposed in and accepted by parliament defining who can be recognized as an Indian citizen. The Citizens Amendment Act (CAA) states that refugees who arrived in  India before 2015 from the neighboring countries Pakistan, Bangladesh and Afghanistan can be recognized, unless they are Muslims. Sri Lankan Tamils, who are mainly Hindus, are also excluded. These two measures together are a step towards turning the 200 million Muslims in India into second-class citizens.

With these measures Modi and his ruling party Bharatiya Janata Party (BJP) are stepping up their Hindu nationalist policies, which they need in order to maintain their popularity. The economic growth of recent years has only benefited a small layer at the top of society. Nearly 60% of the 1.3 billion Indians live on less than $3.10 a day, the World Bank’s median poverty line. More than 250 million people have to survive on less than $2 a day. The hope that strong economic growth would improve the social conditions of the majority of the population has proved to be an illusion. Moreover, there is now a serious slowdown in growth. In the third quarter of 2019, GDP grew by 4.5%, the lowest level since 2013.

Against this background, Modi needed to whip up a nationalist campaign to win the May elections. He is helped in this by the weakness of the main opposition party, Congress. It stands for the same economic policy of liberalization and stimulation of the free market as the BJP, while offering no answer to the nationalist campaigns of Modi.

The policies of communal division are however meeting mass opposition. Hundreds of thousands have already protested against the CAA and the NRC with young people and women at the forefront. On New Year’s Eve there were demonstrations in Delhi, Hyderabad, Mumbai and Kolkata, among others. At the beginning of January there were already massive demonstrations with 100,000 and more participants in Kochi (Kerala) and Hyderabad (Andhra Pradesh), as well as a protest of tens of thousands in Bangalore, and another by the LGBTQI community in Delhi.

The authorities have responded with mass repression. Demonstrations are either not allowed, or under pressure, have only allowed a limited number of participants. In Hyderabad, officially only a thousand people were allowed to demonstrate. Thousands of people have been arrested, including in the northern state of Uttar Pradesh alone 1100 people, with a further 5,558 placed under ‘preventive arrest’. At least 27 people have been killed.

It is not only the official authorities that resort to violence. At the Jawaharlal Nehru University, a long-time bastion of left wing politics in New Delhi, masked goons attacked students and teachers on January 5. The attackers shouted slogans like ‘death to the traitors’. Previously, there have been confrontations here between left-wing students and supporters of the right-wing student group Akhil Bharatiya Vidyarthi Parishad (ABVP, connected to the Hindu nationalist RSS).

Congress and other opposition parties stress that the measures are ‘unconstitutional’. However, legalistic criticism will not stop the measures. Several Indian states have announced that they will not apply the CAA and the NRC. This includes Kerala in the south, which is governed by the Communist Party of India (M). But this has been done to avoid the spread of protests through the state, rather than in the interests of building a united movement across India. As a result, the government’s measures which are intended to split the working class and poor may gain traction as regional tensions within India increase.

The only way to stop this happening is for a massive united resistance across different population groups. This unity will be the strongest when based not just on respect for each other’s specific religious and ethnic backgrounds, but when it is centered around specific goals aimed at increasing the living standards for all.

The General Strike on January 8 can play an important role in uniting the resistance to the BJP’s policies. The trade union federations calling for the strike are correctly directing it against the anti-social policies of the government, including privatization and the destruction of labour legislation, as well as in opposition to those measures aimed at creating communal divisions. The appeal is supported by student groups protesting against higher tuition fees and against the commercialization of higher education. Up to 250 million people are expected to participate in the strike.

Mass struggle is the only way to defeat the Hindu nationalist and anti-working class polities of Modi and the BJP. A program to change society is essential, rejecting the ‘lesser evil’ policy which leaves the vast majority of the population with no prospect of improving their living conditions. Capitalism can offer nothing to the masses in India. To put an end to hopelessness, poverty, hunger and division, the entire system must be fought. This is best done with a program of socialist change to create a society in which the workers, poor farmers and their families decide democratically how to use the available resources in their interests.