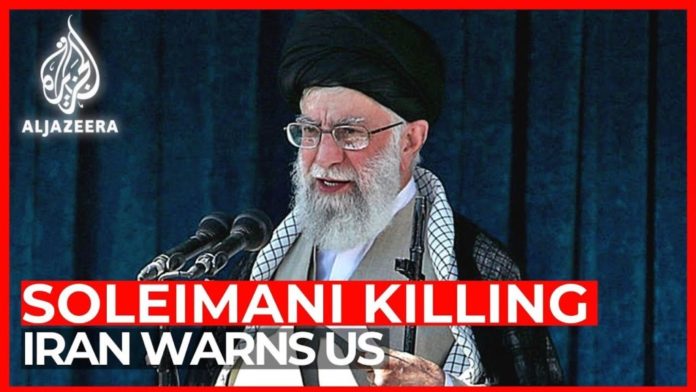 The headline and editorial in the Lebanese pro-Hezbollah newspaper Al-Akhbar on Friday read: “The martyrdom of Soleimani: It is war!” This is just one of the first angry reactions to the overnight U.S. drone attack on the convoy leaving Baghdad International Airport that killed top Iranian General Qassem Soleimani and at least six others, including several militia commanders who had been involved in the battle against ISIS. The shock waves quickly spread around the world – the price of oil jumped by 4% and the U.S. equity market came under pressure as speculators sought “safe havens” for their money. The terms “Third world war” and “Franz Ferdinand” trended on Twitter.

We are not on the verge of a third world war as a result of this brutal action by Donald Trump. But his decision to authorize this assassination has undoubtedly made the situation in the region much more dangerous and it could rapidly spiral into a much more serious conflict. This is indicated by the warning sent out by the U.S. government to U.S. citizens in Iraq to leave the country immediately, making no attempt to approach the U.S. embassy. Iran and its allies like Hezbollah in Lebanon will seek to attack U.S. and U.S.-allied targets, including possibly Israel or Saudi Arabia, leading to further retaliation by these regimes. The victims of this escalation will overwhelmingly be ordinary people in the region.

Iran has also demonstrated earlier this year that it is capable of blocking oil tanker traffic in the Strait of Hormuz as well as crippling Saudi oil production. The outbreak of a more serious conflict in the region could have major consequences for the world economy already facing a major slowdown. Another long-term consequence for ordinary Americans and other innocent people throughout the world will, of course, be the threat of further terrorist attacks.

The assassination of Soleimani is the latest stage of an offensive by the U.S. against Iran, which began with Trump pulling out of the nuclear accord negotiated under Obama and following this up with devastating sanctions. Sanctions in themselves are an act of war and the Iranian regime has sought to push back, including downing a U.S. military drone and using their proxy forces in Iraq to attack bases with U.S. forces. The assassination also reflects the need for U.S. imperialism to show “strength”  in the wake of the disastrous deal with Erdogan in Northern Syria and various attacks by the Iranian regime and its proxies, including on the US embassy in Baghdad.

The way in which Trump took the decision to launch the attack in itself indicates the “rogue” nature of his rule. Not only did he ignore Congress, which is supposed to sanction such actions, reports imply that he barely consulted his own advisors. Indeed, rather than making the announcement himself, he left that honor to the Pentagon, and merely tweeted an image of the U.S. flag. Whilst the U.S. Democrats are correctly pointing out that Trump may be trying to cut across the impeachment process, they would do well to remember that in 1998 President Clinton launched an urgent air strike against Iraq just as his own impeachment proceedings were getting under way.

While we oppose U.S. imperialism’s self-declared “right” to assassinate its opponents, no socialist will shed any tears for Qassem Soleimani. He headed the notoriously brutal “Quds force” – the Iranian regime’s military units used for intervention abroad – “deniable assets” that have reportedly played a big role in the conflicts in Iraq, Syria, Yemen, Gaza, Lebanon and Afghanistan. He is credited with playing a key role in galvanizing the forces against ISIS. He has been no friend of ordinary people. Instead, he has played a big role in propping up reactionary regimes in the region. When students participated in mass demonstrations in Teheran in 1999, Soleimani sent a letter to President Khatami warning him that unless he cracked down on the students, Soleimani would do so himself and, at the same time, organize a military coup to overthrow Khatami. It is widely thought by participants in the recent protests in Iraq, which have demanded the end of Iranian and all foreign intervention, that Soleimani had not only been pushing the Baghdad government to take a hard line, but had been supplying and pushing the militias to attack the demonstrators. Hundreds have been killed and many more wounded.

This, however, is absolutely no justification for the assassination of the general and his entourage. Nor should we fall into the trap of repeating what some of Trump’s spokesmen have been saying that Soleimani is responsible for all of the region’s problems. The whole region is the victim of a brutal battle for power and control of natural resources between the different imperialist, including regional imperialist, powers. There are no principles involved except the attempt to exploit the region’s wealth at the expense of ordinary people. Alliances that are expedient at one time or in one country, for example in the fight against ISIS, are ditched or turned on their head in neighboring countries. The first Iraqi city to resist ISIS in 2014, Amerli, was defended by what the Los Angeles Times described as “an unusual partnership of Iraqi and Kurdish soldiers, Iranian-backed Shiite militias and U.S. warplanes”. Then the U.S. was quite happy to work alongside Soleimani.

Trump’s justification for the attack is that now Soleimani “posed an imminent threat to American lives” and was “plotting to kill U.S. citizens”. This follows the statement he made earlier this week after Shia militia members, who are widely seen as promoted by Soleimani, invaded and occupied the U.S. Embassy compound in Baghdad, without loss of life. Trump warned that “Iran will be held fully responsible for lives lost, or damage incurred, at any of our facilities. They will pay a very BIG PRICE! This is not a Warning, it is a Threat. Happy New Year!”

The occupation of the Embassy is a clear warning of the dangers and consequences of the intervention by different imperialist forces in the region. Since early October, Iraq has been in the grip of heroic protests against lack of jobs, services, massive corruption, and the religious sectarianism that has been enshrined in the government system left over since the end of the formal U.S. occupation. (See article https://worldsocialist.net/?p=847).

The protesters have made clear their opposition to the presence of U.S. forces and their hatred for the Iranian-backed militias, which have been involved in attacking the protesters in support of the current Iran-leaning government. These latest events will enrage the reactionary Shia militias, who will undoubtedly step up their violent campaigns throughout the region. Already in Iraq, Muqtada al-Sadr has declared that he will reactivate the Mahdi army that fought the U.S. and carried out a whole range of sectarian murders during Iraq’s civil war.

Iran too has recently seen the growth of mass opposition, triggered by the increase in fuel prices against the background of an economy suffering from massive corruption and U.S.-imposed sanctions. As in Iraq, the regime acted with brutality, accusing the opposition, at the same time, of being “counter-revolutionaries and foreign enemies of Iran” and whipping up anti-U.S. feelings. (See article https://worldsocialist.net/?p=743).

The murder of Soleimani, while a blow to the Iranian regime, will also act to reinforce it at a moment when it is facing its biggest internal challenge from mass opposition since the 1979 Revolution. Soleimani himself has been quickly replaced by Islamic Revolutionary Guard Brigadier General Esamil Ghaani, who will not only continue but undoubtedly step up Soleimani’s bloody work throughout the Middle East. The assassination is being used by the Tehran regime to step up its anti-U.S. propaganda, making it more difficult for the protest movement there to continue. Already Iran has seen a wave of protests chanting “Death to America” and carrying portraits of Soleimani – according to the Iranian news agency, already affecting Tehran, Arak, Bojnourd, Hamedan, Hormozgan, Sanandaj, Semnan, Shiraz and Yazd.

The reaction of other imperialist powers has been one of concern and caution. China has called for the U.S. to respect Iraqi sovereignty. French President Macron immediately phoned President Putin of Russia, both countries expressing the need for caution and for Iran to avoid escalating the conflict. Israel, of course, supports the U.S. action, but has had to step up security in response. The concern by the other powers is fueled not by the human or political rights of those living in the region, but from fear that this action could tip the region over into a dramatic escalation of conflict and because of the potential effects on the world economy. European powers worry that as a result the Iraqi government, that has condemned the attack, will enforce to decision to kick out the remaining 5,000 US troops still in the country. This, they fear will weaken the fight against ISIS. Clearly understanding the dangers, the Pentagon has today dispatched a further 3,500 troops, who are already on the way to Kuwait ready for deployment in Iraq, Syria, or elsewhere.

One commentator described this attack as a departure from the usual “proxy war” nature of the conflicts in this part of the world in the sense that this was a direct blow by a major imperialist power on another, albeit regional, power. Despite attempts by Congress and even sections of the U.S. military to hold Trump in check, as well as the reluctance of other powers to support his aggressive actions, it is certainly the case that there will be a stepping up of the conflicts between the different sides although, at this stage, an open war between the powers is not likely. Nevertheless these conflicts can develop into an open confrontation between troops of the different powers – not only between the U.S. and Iran. Russia, for example, has now opened a military base in Syria, just a short way from an area supposed to be under U.S. protection, whilst Turkey is sending forces to Libya.

There are two ways this can play out. Either the different powers and warlords remain in control and the situation degenerates even further, leaving the region in escalating poverty and continued inter-ethnic and inter-imperialist conflict, and the wider world subject to even more terrorist actions.

Or the other force that has been flexing its muscles in the region in recent months – the working class, – can step in to stop this happening. Recent events in Iraq, Iran, Lebanon and elsewhere have demonstrated the potential that the working class has if it is united and acting decisively, refusing to lean on any of the imperialist powers – whether the U.S. or Iran – to put forward its own, independent and internationalist position.