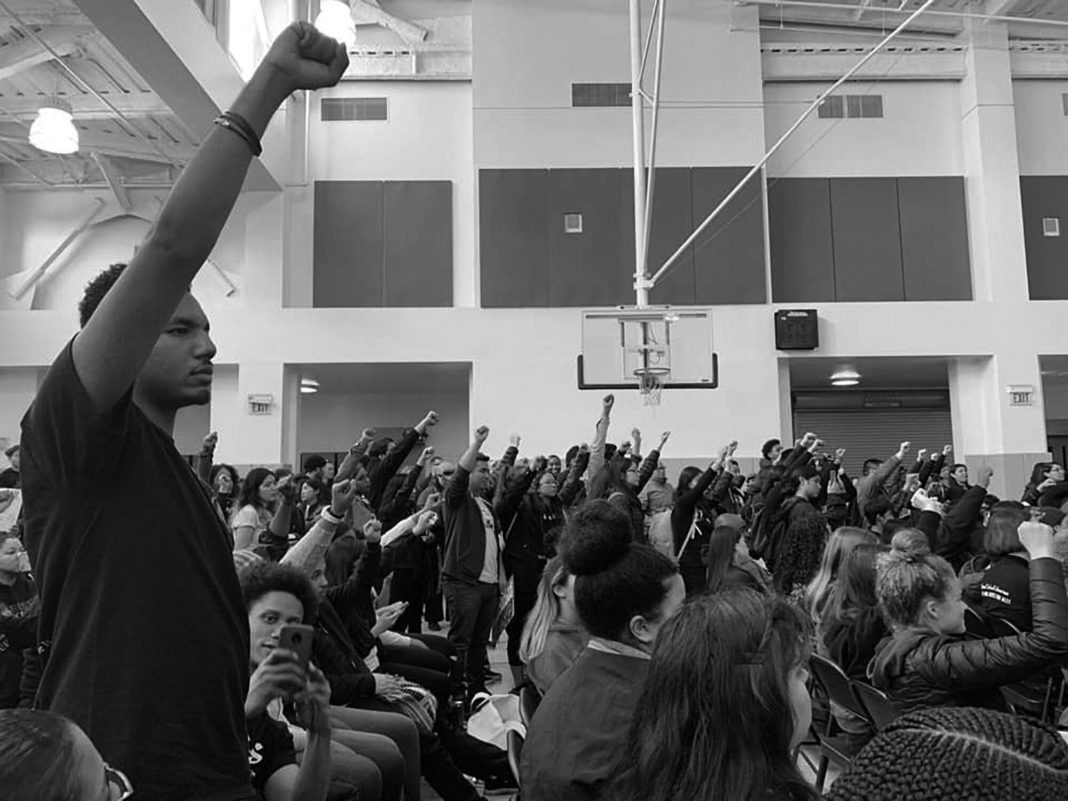 The physical attack and arrests led by police against parents and teachers at the November Oakland School Board meeting says it all. The billionaire-funded Board will do whatever they need to do to stay on course. Oakland parents and teachers are done with the cold-hearted indifference of a Board that just does not care about kids.

The District’s recent decision to hire a Charter boss to run student enrollment is yet another sign of the hostile takeover of our District. Classrooms are under resourced as the District throws money at their army of consultants.

Oakland is Not For Sale

Oakland School Board meetings are no longer the ritualized therapy sessions where those facing cuts come and complain while board members stare into their phones. The Oakland Not For Sale movement, mostly made up of parents facing school closures, is refusing to let the privatization juggernaut rollover their kids’ lives without consequences. So far we have not been able to stop the board from closing schools: one middle school, Roots Academy was closed after the last school year, and several more are slated to close after this school year. However, the lines of demarcation between a school board bought and paid for by the billionaire class and working class families and teachers have never been sharper.

The Board has gone from turning off the mike on parents and teachers, to erecting a metal fence around the stage where the Board sits.  Moving on the offensive against their own constituents, the Board allowed the school police to unleash on protesting parents, arresting six. One of the parents of a closing school, Saru Jayaraman, was thrown to the ground, destroying her knee, which was captured on camera. She was then taken to the ER and handcuffed to her gurney. Her injury was worse than the kind of injury that ends an NFL players career. Saru spoke to the next board meeting leaning on her crutches,  “you have exposed yourselves! You are an illegitimate and brutal force!”

Schools activist Mike Hutchinson summed up the lessons of past battles, arguing “we tried to convince the Board, which was a waste of time. We just have to stop them!” This sentiment was powerfully strengthened during the 7-day spring Oakland Education Association (OEA) strike, which was a huge turning point in Oakland. The union squarely placed itself at the center of a battle framed as one between the working class of Oakland and the billionaire class, with a massive demonstration on the billionaire charter school headquarters. The people of Oakland came out in their thousands to support the teachers, with 95% of students honoring picket lines and with thousands of window signs in homes and cars across the city.

The colossal 2019 strike has put the privatization movement on the back foot for the first time in decades. They have been used to winning every battle, to hiding behind “school choice.” The strike exposed the role of Charters to tens of thousands, and how the Districts’ cuts are a deliberate tactic to pave the way to privatization.

Nationally, a handful of billionaire families: the Waltons, Gates and Zuckerbergs have built a mammoth war chest to destroy public education and establish Charter Schools. The Republican Party and the Democratic party establishment are on board. On the other hand, 2018 and 2019 have witnessed the rise of the unions, of independent working class action against public sector cuts and private sector wage stagnation. The teachers, nationally, have been at the forefront of industrial action. But can this be translated to desperately needed political change?

Can the Privatizers be Beaten in 2020?

Millions of billionaire dollars will rain down on Oakland in 2020 to keep the city council in the pockets of the big developers and to keep the Board in the hands of the privatizers. That money will be used to carpet bomb households with TV ads, mailers and hired door knockers. They will say whatever they need to say to defeat us. This is the 2019 election experience in Seattle with Kshama Sawant and Socialist Alternative’s defeat of a similar campaign by Amazon.

The privatizers were beaten in the OEA strike. They can and must be beaten at the ballot box. The strike witnessed the incredible sacrifices teachers, parents and students were willing to endure to fight the anti-public education forces. The blocking by hundreds of teachers and parents of the School Board meeting on what was to be the final day of the strike marked a new level of combativity in the movement to defend public education. Despite the complicated ending of the strike, the teachers and parent movement emerged far more confident and more aware of the stakes of this fight.

The greatest danger is that the enormous explosion of enthusiasm and activity during the strike is not able to find its way into the 2020 Board elections. The elections will coincide with the Presidential campaign, where tens of millions will be mobilized to vote against Trump. But that does not mean that people will follow their ballot papers all the way down to the School Board voting options. A bold campaign, led by candidates who pledge to not pass cuts and are prepared to end privatization measures can capture Oaklanders’ imagination. A campaign that promotes taxing the rich and expanding school resources would draw in a much wider layer of people. Bernie has proven that a fighting, working class program of demands does inspire people to fight and get involved.

Privatizers’ candidates have won every single School Board election in recent years. They will be extremely motivated to not cede their control over the District and the billionaires will throw a lot of money at their candidates. They will be highly organized, very early.

We will need credible, inspiring candidates; a bold platform and strong organization to win. Like the David and Goliath match in Seattle last November Kshama Sawant defeated Jeff Bezos’ $1.5 million money bomb it can be done. While virtually all of Oakland’s political establishment claims the “progressive” mantle, this same establishment has lined up behind the privatization of our school district. Running candidates who are close to the political establishment and who pay lip service to supporting teachers and families without running on a bold program of ending school closures, refusing school site cuts, and putting a moratorium on new charters schools, is a recipe for failure.

Flowing from last year’s teachers strike, the best known union leader in Oakland is now the President of the OEA, Keith Brown. Thousands of Oaklanders have seen Keith speak, have read his quotes or followed him on social media. No other union leader in Oakland is anywhere near as well known. The union should consider running Keith Brown for School Board. There are many logistical and organizational issues that would need to be addressed by such a move. But seen in the light of the overthrow of the privatizers’ rule of the District, the movement can find a way to overcome them.

The OEA has 3,000 members, economically united in its organization. It is organized school by school, in every Oakland neighborhood, and has at least 100 core activists. The School Board elections are central to the unions’ success and its goals. Teachers are more likely to join the election campaign behind their leaders than other candidates, given the level of trust and confidence in the OEA leadership. While the OEA must be sensitive to the needs of all its coalition partners, the organized working class (the unions) wield the kind of power that no other organization holds in this fight. Internationally, the biggest reforms won for the working class have been made when the unions have stepped into the void and used their power independently.

The parent community, while determined and angry, have historically stayed organized only around specific school closures. Once a school closure is completed, only a few parents generally remain active in the movement, given all the other pressures on working class parents. Oakland Not For Sale has had greater longevity, in part due to the inspiring experience of the strike. The most widely organized Oakland parents have ever been is during the build up and execution of the teachers strike. In this sense, the OEA is seen as the leadership of the movement to defend public education.

Never has there been a better moment for the public school movement to strike at the heart of the political takeover of the Board. Never have teachers and parents been so united. The  7-day strike developed a bond built between teachers and parents that did not exist before. Running one or more strike leaders for Board is the most efficient way to begin to build the forces necessary to defeat the millions of dollars that the privatizers will be pumping into this election.

A Concrete Plan to Restore and Rebuild Oakland Schools

Some time in 2020  or 2021 a recession is likely to hit the Bay Area. This will put enormous pressure on the OEA to accept contract concessions, and the Board to make much deeper cuts. The argument that There Is No Money, will gain some credibility. Very few candidates will say No to cuts during a recession or in an environment of shrinking revenues, however this is the right position. This is the richest state in the richest country in history. We are only poor or under resourced to the extent that we are not organized.

A critical commitment is for a slate of candidates that will refuse to pass a budget that means cuts to classroom resources. Oakland needs candidates that would openly defy attempts to force them to make cuts against teachers or kids and would mobilize parents and teachers against such attempts. We need candidates that will build a broad movement around a stated program and not simply the candidate that seems the most “viable” in terms of status quo politics.

The election will take place alongside, and in the wake of the Bernie 2020 movement with a likely high voter turnout, which tends to favor left candidates. The national repercussions of teachers’ union leaders running for office, not as Democrats, but as union candidates could be immense. It could be to local politics what the West Virginia strike was to the teachers strike wave. It could also point a way forward to other teachers’ unions up against hostile legislators.

We cannot predict the pathways in which an independent party of the working class will be established in the US. However, were labor candidates to start running against business candidates, this would be consistent with the direction that could lead to the rise of a working class party in the US and the beginning of the end for big business’ dictatorship over politics and society.