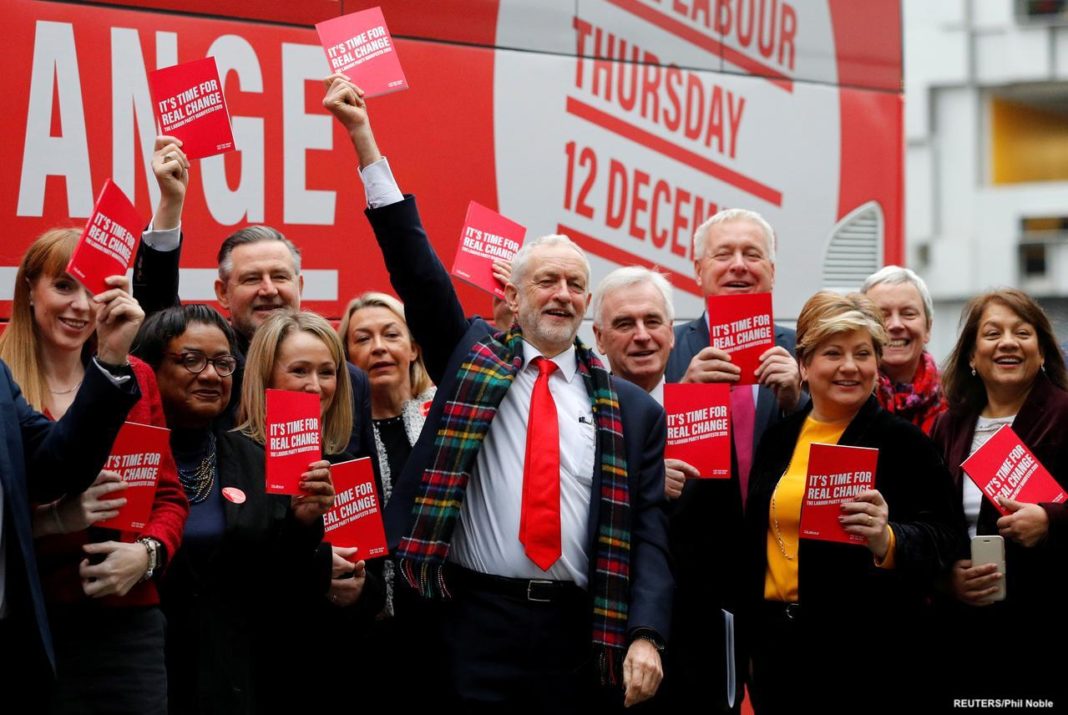 The final countdown has begun. With less than a week left of election campaigning, Corbyn and Johnson took part in the final televised head-to-head on December 6. The debate revealed a contrast that could barely be clearer.

In some ways, Johnson’s posh-boy debating society demeanor illustrated his contempt for working-class people even more clearly than what he actually said. A relentless repetition of the actually vacuous phrase “get Brexit done” –  tortuously shoehorned into just about every answer he gave – substituted for any real engagement with the issues being raised by the audience: the NHS, austerity, racism and so on.

Corbyn, on the other hand, while not one of the slick public school performers who have dominated the mainstream capitalist parties for decades, spoke with authenticity and determination. Despite constant interruption and the former chair of the young Conservatives as the typically unfair and biased BBC interviewer, his main message – offering an alternative to austerity and hope of a better future – will have shone through for many of those watching. Unsurprisingly, polls showed viewers overwhelmingly considered that Corbyn came across as more ‘in touch’ with ordinary people than Johnson.

But despite his reasonably strong performance in this and other debates, there is still an uphill battle to see Corbyn elected prime minister in the coming week. The effects of the mistaken approach of the Labour leadership, as well as that of Momentum, have taken their toll during this campaign. What’s more, whatever the outcome of this election, unless there is a dramatic change in approach, they threaten to continue to do so in its aftermath.

Corbyn’s first retreat was made as far back as 2015. Under pressure from the Blairite right, whose aim from day one was to prevent Corbyn from ever seeing the inside of Number Ten, he abandoned his historic position of opposition to the EU as a capitalist club – the natural conclusion of which would have been to head an internationalist, anti-racist leave campaign, posing the need for a socialist Europe.

The result of this mistaken approach was to allow Johnson and Farage to cynically position themselves as the anti-establishment insurgents, despite their own exceptional wealth and privilege. The challenge posed by this approach has become especially apparent in the north of England, where Labour is fighting to maintain votes in areas where a majority voted leave.

Ever since 2015, in a hopeless attempt to appease Labour’s right, one concession after another has been made to their demands. At every stage, retreats by Corbyn have only emboldened his opponents. One Blairite MP, whom Corbyn even gave a position in the shadow cabinet, is now standing as a Lib-Dem candidate against Labour.

Many more Labour right-wingers, including those remaining in the party, are engaged in open sabotage. Many are working hand in hand with the rabid, right-wing billionaire press, aiming to slander and undermine Corbyn as an anti-semite, despite his consistent record of opposition to racism in all forms. This is despite the fact that Corbyn’s opponent, Boris Johnson, built his journalistic career on base, dog-whistle bigotry.

The scandalous role played by the state broadcaster, the BBC, will also have been noted, especially by the thousands of workers and young people who have been active participants in the Labour campaign. Systematic negative coverage of Labour’s campaign, with Tory party spin angles making their way into BBC headlines, have exposed the role of this institution in protecting the interests of the capitalist class.

But despite all of these tremendous challenges, Corbyn could still win this Thursday. To do so he needs to go all out. He needs to unapologetically call-out the pernicious intervention of the billionaire class, particularly via the media, in seeking to undermine the prospects of an anti-austerity, pro-working-class government being election. He needs to call mass rallies, in marginal seats, building on the momentum which has already been generated to put thousands on the streets to kick the Tories out.

Corbyn needs to adopt a combative stance when asked about the future. Whatever the outcome on Thursday, the battle will not be over. Should Labour emerge as the largest party in a hung parliament, Corbyn will face immediate pressure to water down parts of his program in order to ‘get on board’ pro-capitalist parties to allow him to form a government. He should resist such pressures, instead daring those who have claimed to oppose cuts in this election campaign to vote against an anti-austerity budget which he proposes.

Should he form a government, these pressures would only be the beginning. The vicious anti-Corbyn campaign we have witnessed in the last month would not only continue, it would intensify. That’s why mobilizing working-class people is so essential. Corbyn will find no friends in the capitalist press whether right-wing or liberal. He will likely face economic sabotage by the rich – with capital flight threatened, closures posed, and demands for him to drop his plans for nationalization and increased taxes on the rich.

The only force upon whom Corbyn can rely is that of workers and young people – a mobilized and active working class. Corbyn must use the last days of this campaign to prepare this force for what is coming – win or lose. Because either outcome should signal the start of a major, mass mobilization. A mobilization to end austerity, to defend precious public services like our NHS, and to end the rule of the billionaire class.

Only a socialist society – one based on public ownership of the major monopolies and a democratic plan of production – can offer a bright future for working-class people and our planet. This is the message of hope which Corbyn must champion.