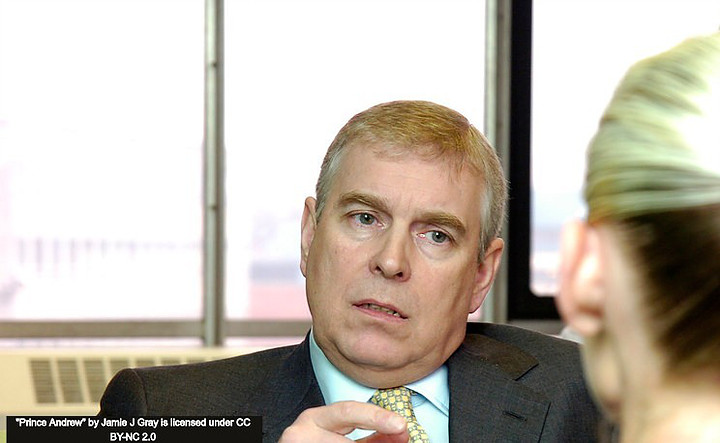 “Going to Pizza Express in Woking is an unusual thing for me to do” sneered Prince Andrew as he struggled to contain his disdain for ordinary people.

In an astonishing interview with BBC Newsnight, Prince Andrew spectacularly failed in his attempts to distance himself from convicted sex offender Jeffery Epstein. Epstein was a powerful billionaire who was recently found dead in his prison cell. He was awaiting trial for a series of child sex offenses and faced 45 years in prison.

When describing the relationship with Epstein, Andrew recounts jetting from mansions to palaces to private islands, from lavish parties to “a straight forward shooting weekend.” In the world of the super-rich, power and wealth go hand in hand. It was in this context that Jeffrey Epstein trafficked young women around the planet for the sexual gratification of his fat-cat mates, including, allegedly, Prince Andrew.

Self pitying and self entitled, Andrew is a fitting representative of not only the British Monarchy but also of the international ruling class. Utterly inept, he dismisses the account of victim Virginia Roberts, who recalls Andrew sweating profusely before she was forced to have sex with him. His defense – he is unable to sweat due to an adrenaline overdose during the Falklands war – has left healthcare professionals baffled.

His gob-smacking display of arrogance was topped off when Maitlis asked if the Prince had any feelings of guilt, regret or shame. Andrew replied, “As far as my association with [Epstein] was concerned, it had some seriously beneficial outcomes in areas that have nothing to do with what …we’re talking about today.”

Prince Andrew is using “seriously beneficial outcomes” as a shameless euphemism for making lots of money for British business people. Current Prime Minister Boris Johnson agrees. Refusing to be drawn on the relationship between the Prince and child sex offender, Johnson said “I’ve worked with Prince Andrew, I’ve seen the good he has been able to do for UK business overseas and other than that I have no comment.”

There were, however, no ‘beneficial outcomes’ for the young women – several of them minors at the time – who were trafficked by Epstein, allegedly aided by Ghislaine Maxwell, daughter of former UK millionaire newspaper tycoon Robert Maxwell.  A series of lawsuits are accumulating in the US, brought by former victims and represented by women’s rights lawyer Gloria Allred, in which Prince Andrew may be required to testify.

One thing is certain. The public involvement of Prince Andrew with a billionaire sex offender has damaged the credibility of the Monarchy at a desperate cross roads for the British ruling class.

Both the Royals and BBC producers would have had high hopes that the Newsnight interview would allow Prince Andrew to spin his way out of a dark and sordid corner, however the car crash that ensued has done the opposite. A disaster interview at the worst possible time – in the middle of a general election where, for different reasons, neither Johnson nor Corbyn represent a safe pair of hands from the point of view of the divided British ruling class.

If Jeremy Corbyn were to lead a government implementing socialist policies that were threatening their interests, the capitalist class could seek to use the Monarchy as weapon against it, up to and including dissolving parliament and staging a coup. The Royal Family are not just pampered celebrities, living a privileged lifestyle at the expense of everyone else, they are totally incompatible with socialism. Like the human appendix, the Monarchy is a relic of a bygone feudal age. Benignly existing in normal times, it can become clogged, inflamed and life threatening, spewing its septic contents to every organ of the body if not skillfully removed.