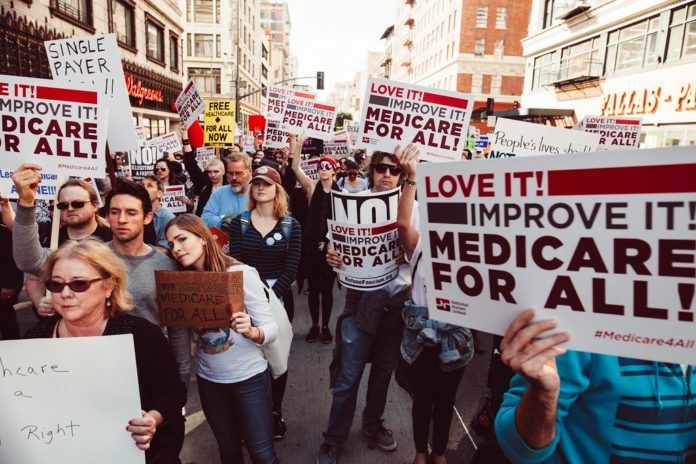 Millions of people are increasingly demanding an end to the dysfunctional U.S. healthcare system. The fight for Medicare for All against entrenched corporate interests can be the beginning of a more decisive struggle for the kind of society we need.

It is the task of socialists to clearly lay out the class divide in this fight, with “Big Pharma” and private insurance CEOs on one side with their paid politicians and working class people and families on the other. Winning Medicare for All, which would eliminate private insurance and create a national guaranteed healthcare plan with no premiums, copays, or deductibles will require building a sustained mass movement. Also, it will require building a new independent working-class political party and to build rank-and-file led, fighting unions in the workplace.

Sanders Brings Medicare For All into a National Conversation

Bernie Sanders introduced millions of people to the idea of “Medicare for All” during his 2016 primary campaign though the concept had been around for many years. It had gone by other names and had gained some support – but it had never enjoyed the widespread popularity it has now.

Sanders’ 2016 campaign broke through the corporate wall of silence created by the pharmaceutical industry, for-profit hospital corporations and insurance companies who oppose it. Sanders brought his message to huge crowds at rallies and to millions more through the national media attention the campaign attracted. Polls throughout the campaign tracked increasing support for the measure, ultimately showing a large majority of self-identified Democrats and even a slim majority of Republicans favored a Medicare for All type plan.

Together with the profound dysfunction within the Republican Party, this new support for Medicare for All is partially responsible for the failure of President Trump’s repeated attempts to “repeal and replace” the Affordable Care Act known as Obamacare – one of his key campaign promises. The Trump administration has found many ways to undermine the positive effects of Obamacare, but it has failed to overturn it wholesale. Momentum continued through the 2018 mid-term elections with Medicare for All featured prominently in the campaigns of many successful candidates, particularly the young self-described democratic socialist challengers like Alexandria Ocasio Cortez at the national level and many more at state level.

Where the 2020 Candidates Stand

The growing support for Medicare for All has the private medical industry fighting back, resulting in most established Democrats who initially signed on to the bills now trying to walk it back and put forward some “realistic” compromise which leaves private health insurance in the mix. Most notably, Kamala Harris’ proposal would actually expand the role of private insurers in Medicare and would be phased in over ten years.

Senator Elizabeth Warren signed on to Sanders’ legislation and has pledged to end private health insurance. However, unlike her hyper-detailed policy proposals on student debt, combating fraud in Washington and virtually any other issue up for debate in the presidential primaries, her new statement on health care is remarkably vague, general and short. It is silent on some of the biggest questions, like the fate of co-pays, deductibles and out of pocket expenses. The failure to be decisive on these questions leaves room for compromise with health care profiteers.

In contrast, former Vice President Joe Biden has never supported Medicare for All. His current position is to strengthen Obamacare. Biden favors adding a public option to what’s left of the ACA. The public option would allow people to buy Medicare-like coverage from the government as if it were any other insurance plan.

Many on the debate stages have used union members as a stick to beat Bernie with, suggesting that Bernie’s plan strips union members of their contractually negotiated healthcare. This is laughable in the face of the GM strike where the company has refused to pay healthcare benefits to striking workers forcing the cost of healthcare onto the United Auto Workers (UAW) union itself. Sara Nelson, president of the Flight Attendants Association, wrote on this: “UAW has one of the best plans in the country, but management can still use it to hold workers hostage. Medicare for All puts power back in our hands.”

Bernie Sanders stands alone in the 2020 field as he’s doubled down on his support for Medicare for All despite the intense pressure and scrutiny that comes with launching a national presidential campaign. He followed up his initial 2018 legislation with an improved version in 2019 to more closely match Pramila Jayapal’s House bill.

Perhaps most crucially, Sanders has mobilized his network of supporters to the picket lines of health care workers on strike against the University of California system and to rallies against the closure of a safety net hospital in Philadelphia. He has reiterated something that we have long said, which is that it is not the election of one person to the Oval Office that will effect radical change. It will require the building of a mass movement rooted in the working class.

The crisis of for-profit healthcare does not need to be explained to working class people. 41% of working age Americans have medical bill problems or are paying off medical debt. The growth of support for Medicare for All shows that the rage and conviction experienced by millions of Americans about outrageous healthcare costs could be turned into a powerful and determined mass movement.

While Sanders has real political limitations including accepting the framework of the corporate Democrats, a victory in the Democratic primary would mark a historic turning point in the fight for health care and would strengthen the working class in the U.S. For this reason, and many others, opposition to Sanders will be vicious and unrelenting. The multitude of Democratic candidates putting forward watered down variations of Sanders’ policy proposals are the first line of defense for the Medical industry – designed to confuse, distract and divert. Securing Sanders’ nomination and laying the basis for the mass movement he himself says he’s determined to build will require a struggle from below.

Newly elected officials at all levels of government who ran on Bernie’s program, including Medicare for All, and who owe their victories to their support for those policies should endorse Sanders now. This crucially includes Alexandria Ocasio-Cortez. They have the opportunity to shape the conversation and to weigh in on who becomes the frontrunner. Waiting until the primaries are underway would be a clear statement that they are more interested in their futures within the Democratic Party than in actually winning any of the policies they claimed to support.

As a conscious step toward building a mass movement for Medicare for All, millions of regular people can get involved in the Sanders’ campaign now, organizing debate watch parties and groups in their workplaces, like Teachers for Bernie, and their neighborhoods. Workers in unions can organize support in their unions and advocate that their unions endorse Sanders. Whether they result in endorsements by the national unions or not, political workplace conversations can further the development of a reinvigorated labor movement and a new rank-and-file leadership.

Healthcare workers and their unions have added responsibility and opportunity in this fight. Nurses’ unions, particularly National Nurses’ United, have done ground-breaking work on Medicare for All at both the national and state levels. These unions should explicitly make building a movement for Medicare for All a litmus test for all candidates and build a campaign that ties the presidential election to the fight for Medicare for All, warning that the fight against big pharma doesn’t end with the election.

NNU has the power and the resources to organize a Medicare for All national day of action before the February 2020 Iowa caucus. A public invitation to unions and union members to build for rallies in their cities and towns would give supporters a way to engage their coworkers, friends and families in conversation and then in direct action for Medicare for All. If taken up by unions in other industries, the campaign for the day of action could be used to organize new unions in workplaces in those industries also.

A bigger, stronger, more active union movement is an essential element in the fight for Medicare for All, but it is not sufficient. Ultimately, this is a fight for a tremendous shift in power and money from the capitalist class to the working class. It will be vicious and the staunchest defenders of the status quo will come from both the Republican and Democratic parties. The working class will need a political party solidly on its side through which the fight can be waged. That party does not yet exist and will need to be built. Engagement in the Sanders’ 2020 campaign is one starting point in this process, but the end point is incompatible with the Democratic Party and its capitalist funding base.

No Compromise on Medicare for All!

The cold reality is that healthcare today in America is like any other industry under capitalism – run for profit. Like any other industry, it is not run to provide services to meet basic human needs if those services cannot be sold at a rate of profit acceptable to shareholders. Even officially not-for-profit entities are drawn into the race to maximize profits because they must compete with the for-profits, or cease to exist.

Relying on insurance as the primary funding source for services that meet the basic, human need for healthcare is genius for the profiteers and madness for the rest of us. In other industries, people buy insurance to protect themselves against known, but infrequent, risks- e.g. fire, flood and car accidents.

But health care doesn’t work that way. The statistical chance that each and every one of us will need healthcare is 100%. Preventative care, mental health care and wellness programs are on-going, daily needs, not risks to be managed. The insurance companies make no money if they improve the health of their patients.

President Obama’s Affordable Care Act (ACA) contained several significant improvements, including protections for people with pre-existing conditions and family plans which covered children up to age 26. However, it also vastly enriched the already wealthy health insurance companies by adding millions of people to the insurance pool and providing direct and indirect government subsidies for low income people who qualified.

Pharmaceutical corporations are among the most profitable in the economy as a whole, and the most vicious. The shameless profiteering and unabashed cruelty displayed by the makers of essential medications like epi-pens and insulin and the cold calculation of the makers of oxycontin in the opioid epidemic further enraged public opinion. These examples touch on the extremely problematic ethics of a system which puts the pharmaceutical industry in control of the scientific research to develop new medications and treatments.

Wedged between the drug companies and the insurers, hospital corporations run their institutions like steel mills and auto plants to extract every last dollar. Speedups and automation force health care workers to meet productivity targets and give care in compliance with strict protocols, rather than the unique needs of an individual human patient. Urban and rural safety net hospitals, increasingly unable to recover their costs, are closing in record numbers.

Why Medicare for All is Different

You cannot control what you do not own. Hospitals, clinics, suppliers, labs, pharmaceutical and medical device companies would all eventually need to be taken into public ownership and run democratically in the interest of patients, health care workers and the public at large.

Health care for all will not be ensured until all of the major industries are taken into public ownership under democratic working-class control and their assets invested into the public good.