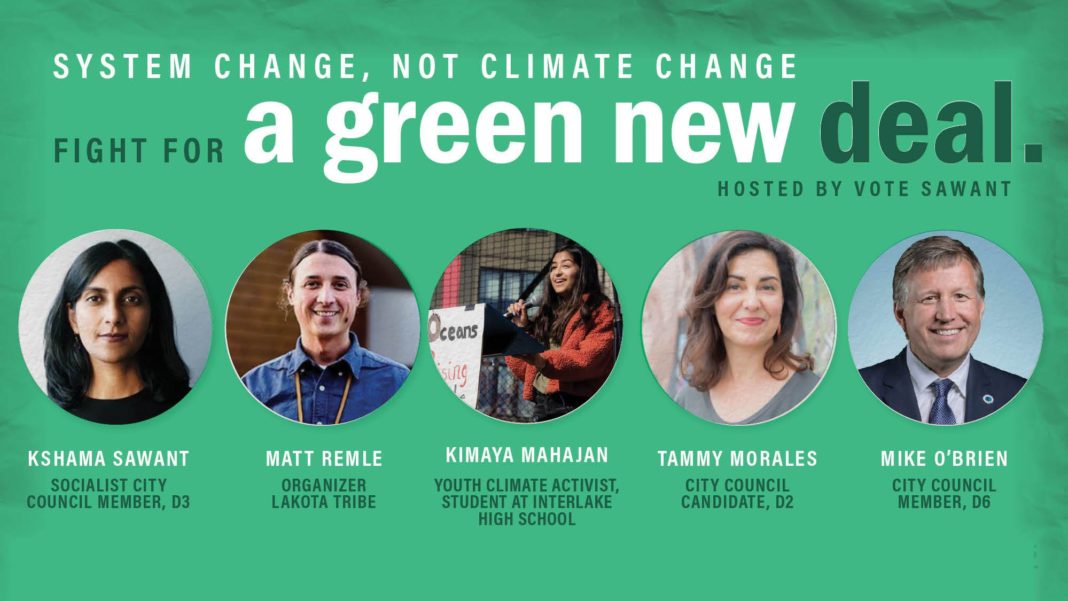 On October 1, around 50 community members and activists gathered in Seattle’s District 3 for a “System Change, Not Climate Change: Fight for a Green New Deal” public forum. The forum, hosted by Seattle City Councilmember Kshama Sawant’s reelection campaign, was part of a series of events aiming to build a unified movement demanding the city take urgent action on the climate crisis and make Seattle a national leader in the transition to a just, sustainable economy. Seattle City Council candidate Tammy Morales held a similar event in District 2, and Morales, Sawant, and DSA candidate Shaun Scott from District 4 all spoke at Seattle’s Climate Strike rally on the need for a Green New Deal. Building this unified movement is urgent as corporations like Puget Sound Energy, the biggest polluter in the region, pour unprecedented amounts of money into the Chamber of Commerce’s PAC in an attempt to buy the local city council elections.

The first speaker, indigenous activist Matt Remle, began by reminding the crowd that the climate crisis is no longer a future abstraction, but a reality that many communities are already facing. Many other speakers also addressed the urgency of the crisis, stressing that we don’t have time for empty platitudes from the political establishment. Environmental activist Nancy Huizar from Got Green and city council candidate Tammy Morales pointed out that while the political establishment has wasted years telling people that the solution was to make individual lifestyle changes to reduce their carbon footprint, the problem is in fact systemic and will require a comprehensive vision that addresses the material and economic needs of communities most impacted by climate change, as well as a just transition for workers in the energy sector.

Taking the movement further and gathering a broad grassroots base will require organizing around concrete demands that address the systemic nature of the crisis. A Green New Deal for Seattle would be a step in this direction and would include a rapid transition away from fossil fuels by 2030, a massive expansion of public transit made fully electric and free, and a living wage, green jobs program to retool our infrastructure for clean energy – all paid for by taxing big business.

Such a bold program, while providing an important lead, will not be easy to win. Kshama Sawant observed in her speech that already the forces of big business are getting organized in the form of corporate PAC’s to try to defeat progressive and socialist candidates in Seattle who support a Green New Deal. If our movement is going to succeed and set a national example in the fight against climate change, we will need a massive grassroots mobilization that challenges head on the unprecedented attempts by big business to buy the city council election. Furthermore, Kshama pointed out that while power continues to be concentrated in the hands of a very few, there is no politically neutral path to winning a sustainable city or planet. While a Green New Deal is a necessary first step, taking on climate change is going to require taking on the system of capitalism itself by bringing the energy sector, big banks, and financial sector into democratic public ownership. Kshama finished by leading the crowd in an energetic chant of “System change not climate change!” and urging everyone in attendance to get involved in this historic fight.

Support the Green New Deal, donate and sign up for campaign updates today at www.kshamasawant.org/donate !