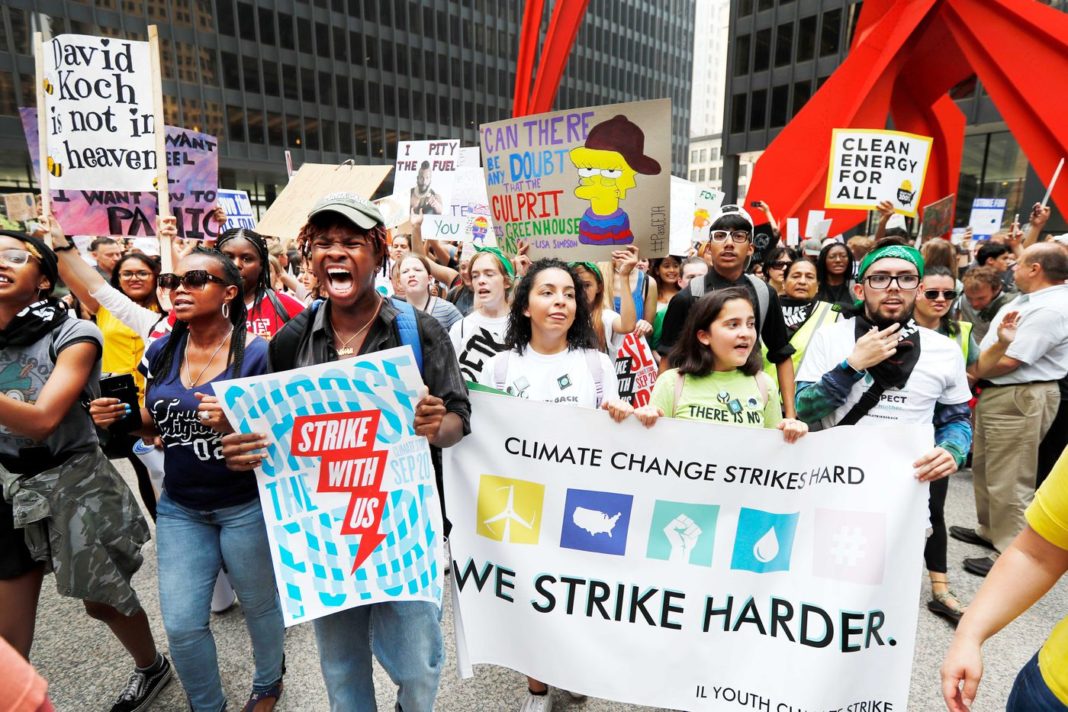 In the first half of 2019, seven million people worldwide were displaced by extreme weather events. We are seeing the impact of climate change with our own eyes as the Amazon rainforest is torched to the ground and the Bahamas devastated by Hurricane Dorian. Disaster after disaster has spurred a new sense of urgency about the climate crisis. On Friday, September 20, over four million people in 164 countries took part in the Climate Strike, the largest mobilization for the environment in history.

The movement has exploded in the past year following increasingly dire reports from the IPCC and escalating youth involvement. The first global day of action on March 15 drew 1.6 million, and in just a few months participation nearly tripled for the Climate Strike.

Greta Thunberg has risen to international prominence through the school strike movement and her fiery speeches that have galvanized a whole generation. Equal credit is due to the thousands of young people who have formed the backbone of the movement on the ground, mobilizing their classmates and carrying out restless agitation. By flyering public transportation, organizing in schools, and using social media to get word out they have built up the numbers to wield an enormous impact. In New York City alone, 300,000 people flooded the streets demanding immediate and drastic measures to tackle the climate crisis.

Although the strike platforms varied across countries, they shared the demand for an immediate transition away from the use of fossil fuels and to wage a fight against the instability, inequality, and violence exacerbated by climate change.

Socialist Alternative and the CWI recognize the enormous significance of the new climate revolt.

Our sections from South Africa to Brazil, from Ireland to Hong Kong intervened with a common set of demands linking the immediate crisis facing the planet to the larger fight for a society that values people and planet over profit.

Inheriting an existential crisis, this generation of climate activists are taking up a systemic analysis. They know protest alone is not enough and are ready for bold action.

There is a strong mood to hold accountable the 100 corporations responsible for 71% of emissions. We encountered a lot of openness to our demand to take them into democratic public ownership, run by elected bodies of workers and civilians, not wealthy executives.

What is produced in a capitalist economy, and how, is decided by a gamble, a best estimate of what would bring in the most revenue at the lowest cost. We on the other hand must take into account the reality that the market itself is not a viable mechanism for reversing the catastrophe already underway.

Only a global planned economy organized on the basis of human need would enable the cooperation required to implement rapid change on a global scale. Such a sweeping transformation will only be accomplished through building a mass movement that can link international collective action and strikes to bring the capitalist economy to a grinding halt.

While today’s youth have a particular material stake in reversing the crisis, a livable planet is in the interest of workers all over the world. The working class has the most to lose from environmental destruction, and the most to gain from the millions of jobs created in the course of transitioning to renewable energy, building eco-friendly mass transit, and restoring communities and ecosystems ravaged by natural disasters.

Unions have started to answer the call. 350.org reports 73 unions internationally endorsed the strike, including Public Services International and the 200-million strong International Trade Unions Congress. U.S. unions such as SEIU and the American Federation of Teachers supported the strikes, and many unions had contingents at the demonstrations.

While endorsements from unions represent a major step forward for the climate strikes, greater solidarity and coordination is needed between the youth movement and the broader working class. With the momentum of the developing strike wave in the U.S., there is great potential for unions to continue to step up involvement in the climate strikes. Organized working-class participation will the single most decisive factor in winning the demands of the climate strikes.

The 1,000 workers at Amazon’s Seattle headquarters who walked off the job in solidarity provide a stunning example of what is needed. Amazon responded with new targets for transition to renewables and carbon neutrality, proving the effectiveness of workplace action to win concrete victories. However, this is the corporation that raised its minimum wage to $15 only to follow up by slashing hours and taking health care from part-time workers at Whole Foods. We can’t take corporate pledges at face value and must keep up the pressure. Distrust of big business was prominent in striking students’ homemade signs that read, “The wrong Amazon is burning.”

City Councilmember and Socialist Alternative member Kshama Sawant sponsored a resolution supporting the right of city workers in Seattle to participate in the strike without retaliation. This points to the role socialists in elected office can play in bolstering the power of workers to take a stand for the climate.

Sawant stated it clearly in her speech to the demonstration in Seattle; “Our mortal enemy is the system of capitalism itself, and the politicians who want to maintain the status quo.”

Despite their strategic statements of support for the climate movement, status quo political leaders continue to frustrate the expectations of the best climate activists. As long as capitalism dominates, politicians will view their job as maintaining corporate profitability in an increasingly volatile world economy.

History will remember the colossal failure of the capitalist ruling class to take action. Emissions are higher than ever and scientists warn that global temperature increase and sea level rise are actually accelerating. The “twelve years” warning is now eleven, leaving no time to waste.

The Climate Strike captured the seething anger of millions who will not back down until something is done. Even slowing this process down which will buy humanity time will require a mass movement pushing back against the fossil fuel industry. But we should not settle for the minimum requirements to delay catastrophe, but rather build up the force to reverse it entirely and achieve real climate justice. The latter would require eradicating the threat at its source, the system of capitalism.

Although clean air and water, guaranteed housing, good jobs, and a future free of the looming threat of mass extinction are fundamentally at odds with capitalism, these goals are concretely achievable with socialist planning. This moment can’t be allowed to dissipate, but must be escalated until we see with our own eyes a real transformation. Workers and youth united have the power to build a socialist alternative that guarantees a livable planet for future generations!