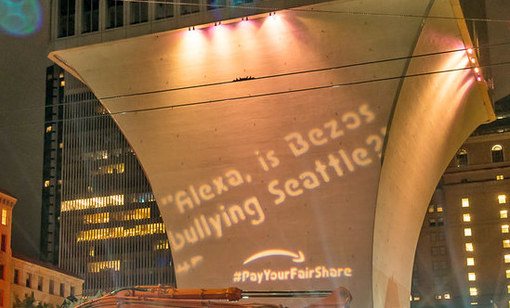 In what may turn out to be a preview of the U.S. presidential election, with the ruling class hellbent on stopping Bernie Sanders at all costs, big business in Seattle is carrying out an unprecedented assault of corporate PAC money against socialist and progressive candidates in this year’s elections.

The corporate elite are deeply concerned about the rise of socialist politics, whether my election and reelection as a socialist City Councilmember in Seattle, Bernie’s self-described democratic socialist presidential campaign, or AOC’s election to U.S. Congress. Our victories in Seattle, including our historic $15 minimum wage law and landmark renters rights wins, and the growing national fight for Medicare for All and a Green New Deal, are all completely unacceptable to the ruling class.

In Seattle, already $450,000 has been spent by Amazon, with nearly $2 million in corporate cash overall, and it seems clear they’re just rolling up their sleeves and getting started. The $1.5 million dollars in Corporate PAC money amassed during this year’s primary alone has already blown all prior city records out of the water.

Amazon’s Jeff Bezos and big business are infuriated by our movement’s victories and are fearful of what it would mean if socialist and DSA candidate, Shaun Scott, and left candidate Tammy Morales join us in City Hall. Now they’re determined to block our struggle for rent control and prevent a Seattle Green New Deal. Last but not least, they have a powerful aversion to any form of taxes on big business, as was on display with the Amazon Tax struggle last year.

As he has himself publicly acknowledged, Bezos largely based his decision to launch Amazon in Seattle on his desire to dodge taxes. Washington State has long been a corporate tax haven, having the most regressive tax system in the entire nation. More than anywhere else in the U.S., the tax burden falls most heavily on working and middle-class people, while big business pays next to nothing. This is no small part of why Seattle has become one of the most deeply unequal cities in the nation.

The region’s corporate elite means to keep it that way. Bezos made national headlines last year when he bullied Seattle to stop the Amazon Tax on the largest 3% of businesses in the city, aided by corporate-bankrolled Mayor Jenny Durkan and the Democratic establishment. Over a modestly-sized tax, Amazon executives acted like mafia dons: threatening to move 7,000 jobs unless the City Council backed down. After the Council passed it unanimously anyway, under the pressure of our movement, Amazon’s lobbyists went to work in the backrooms. Less than one month later, our corporate tax to fund housing and services was repealed, with only myself and one other councilmember voting in opposition.

It bears noting that in spite of the majority of the Council caving on the tax, Amazon moved those 7,000 jobs anyway. Which just goes to show, once again, that bowing down to bullies doesn’t work.

Of course, it’s not only about Amazon. Boeing executives have a long record of extorting billions in handouts from Washington State. And a central feature of neoliberalism has always been its fierce opposition to progressive taxation and workers’ rights. Trump’s tax cuts were only the latest development in the long arc of brutal austerity and deepening inequality – a process that has continued over decades, whether Republicans or Democrats occupied the White House. Fundamentally, this is driven by the bankruptcy of capitalism and its long-term stagnation beginning with the 1970s. Since the end of the post-war boom, profits have increasingly been derived from a relentless squeezing of social services, unions, health care, and the working class as a whole.

The best defense is a good offense. Our movements are going all out to fight for rent control and for a Green New Deal in Seattle, and have energized thousands of working people in our city. Over 12,000 Seattleites have signed on to a petition for citywide rent control, free of corporate loopholes, in just a few months time.

We are building the most powerful grassroots re-election campaign Seattle has ever seen. In addition to our army of volunteers going door to door across the district, we’re on track to raise more in donations than ever raised before by any Seattle City Council campaign, without taking a dime in corporate cash. If the corporate PACs are going to break records, working people need to as well.

And crucially, we will need to build left unity across the city if we’re to stop big business’s attempts to buy the elections.

Amazon and the Chamber of Commerce were successful in getting their purchased candidates through in all seven City Council races this year. This includes my opponent, Egan Orion, who was the #1 recipient of corporate PAC money out of the record 55 candidates who ran in the primary.

To the Chamber’s dismay, fellow socialist candidate Shaun Scott is also campaigning for a Green New Deal and to tax big business to build public housing, in the district just north of mine. Meanwhile, in the district to the south, progressive candidate Tammy Morales is campaigning for rent control and a Green New Deal. Both are running as Democrats, while I am an independent socialist and calling for a new mass party for working people, but the bold left platforms we are campaigning on has struck a chord with people across the city.

We’re jointly organizing Green New Deal meetings with other progressive candidates and our movement in different neighborhoods in the city, starting with Tammy Morales’ event in south Seattle earlier this week. On Oct 1, Morales and others will speak at our “System Change Not Climate Change” Green New Deal meeting in District 3. We’re also discussing with other campaigns about a joint event to stand against the corporate PAC money flooding into Seattle’s elections.

If we can win all three campaigns, not only can we block Amazon’s and the Chamber’s efforts to buy the elections, we can push the City Council further to the left and pave the way for future victories for working-class movements.

But first we have to unmask the fake progressivism of the Chamber candidates, who are all now pretending to represent ordinary people, despite being thoroughly beholden to Amazon, the real estate lobby, and wealthy Republicans. They each say that the massive corporate PAC funding doesn’t mean anything, that it is out of their control. In some of the most brazen dishonesty, some are even lamenting the existence of the corporate PACs. In fact, in order to even be eligible for the Chamber’s PAC funding, the candidates had to apply for it, fill out lengthy questionnaires, and participate in closed-door interviews.

My opponent has taken the dishonesty a step further, putting up posters around the district saying “No corporate PAC money,” pretending he had no hand in the matter. This was after he not only applied for Chamber funding but publicly thanked the Chamber for their support (while addressing a business audience).

Morales’ and Scott’s Chamber-backed opponents, Mark Soloman and Alex Pederson, have been thoroughly disingenuous on as well. In a recent candidate forum, when put on the spot about taxing big business to fund the social services they were claiming to support, Soloman and Pederson both fell back on Republican talking points about “getting our fiscal house in order first.”

Just as big business has a great deal at stake this year in Seattle, so do working people. If we are able to win our struggles for rent control and a Green New Deal, once again that momentum would have the power to spread to other cities.

All of our struggles are connected. Seattle’s historic $15 minimum wage victory was instrumental to it spreading around the country, AOC’s election spurred on the Green New Deal. Sanders’ 2016 campaign decisively changed U.S. politics. Socialist ideas have always been met with powerful opposition from the ruling class, because of their power to inspire working class people into struggle.

If we are going to step up to the challenges facing humanity, to fix our broken health care system, to end the crisis of affordable housing and homelessness, and to avoid climate catastrophe, we urgently need to fightback. We need to stand up to Amazon and corporate America before they take working people and the planet over the cliff in order to protect their massive profits.

Originally published at CounterPunch.org on 9/23/2019.

ABOUT US
Socialist Alternative is a national organization fighting in our workplaces, communities, and campuses against the exploitation and injustices people face every day. We are community activists fighting against budget cuts in public services; we are activists campaigning for a $15 an hour minimum wage and fighting, democratic unions; we are people of all colors speaking out against racism and attacks on immigrants, students organizing against tuition hikes and war, women and men fighting sexism and homophobia.
Contact us: info@socialistalternative.org
FOLLOW US
© Socialist Alternative 2019 | All rights reserved
47 Shares
Tweet
Share47