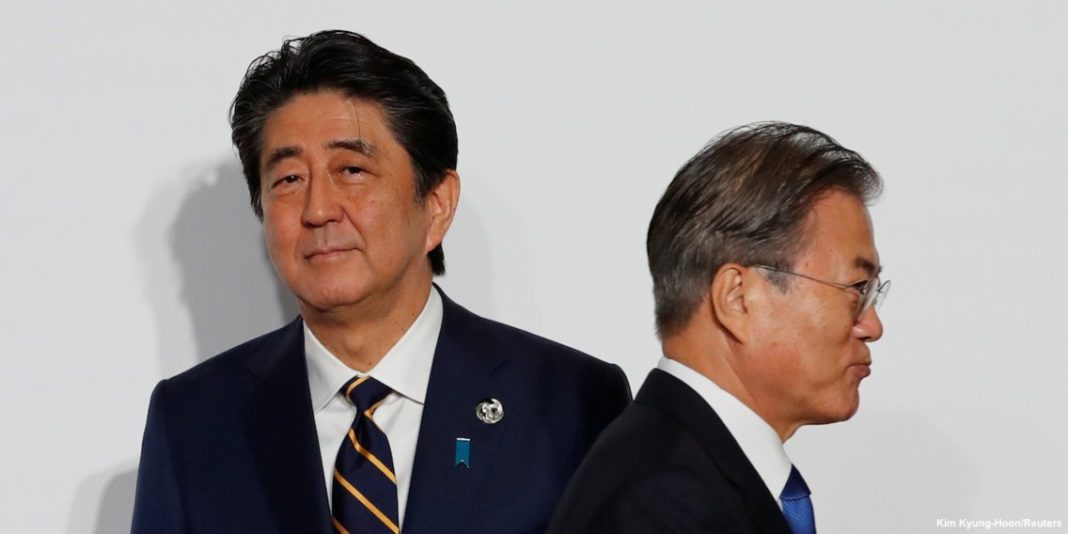 The ongoing trade war between Japan and South Korea has heightened with the decision by the South Korean government to sever their military intelligence cooperation with Japan.

The trade war itself began when Japan removed South Korea from its ‘white list’ of 27 countries who have preferential access to exports; South Korea had been a member since 2004 and is the first nation to be removed.

In retaliation, South Korea’s government removed Japan’s own preferential access, and across the country there were large protests and mass boycotts of Japanese goods. Japanese beer sales dropped 25% in the first few weeks of July, while major clothing retailer UNIQLO had a 30% drop in sales.

Supermarkets have removed Japanese goods, and a popular app identifies Japanese goods to avoid. Tourism to Japan has also fallen, with large numbers of cancelled flights. The major Japanese daily newspaper Asahi Shimbun even showed a photo of a “No Japanese” sign in the window of a restaurant.

The background to all this, however, stretches back to Japan’s occupation of Korea between 1910 and 1945. World War 2 saw drastic increases in forced labor from these countries. In one of the recent protests, a 78-year-old man related to a Korean forced laborer burned himself alive outside the Japanese Embassy in Seoul.

Alongside this was the use of Korean women as sex slaves for the Japanese army; euphemistically called ‘comfort women’.

In the eyes of South Korea – as with other former colonies of Japan – there has been no substantial recognition of Japan’s atrocities during the war. And to make things worse, members of Japan’s ruling elite inflame tensions by visiting the Yasukuni Shrine in Tokyo, which houses the ‘souls’ of 14 Class-A war criminals amongst the other Japanese war dead.

Whatever apologies or compensation have been offered, the South Korean government has seen them as inadequate. Japan insists that the 1965 agreement, providing $800 million in compensation, resolved the issue.

But the ‘comfort women’ issue came to the fore with the 2017 election of Moon Jae-in’s government in South Korea, which overturned a 2015 agreement over this, signed by current Japanese PM Shinzo Abe and the previous South Korean president, Park Geun-hye.

Effects of the trade war

This will drastically affect the import of Japanese chemicals to South Korea, which are crucial for manufacturing electronic memory chips; South Korean firms Samsung and SK Hynix produce almost 70% of the world’s supply.

The latest decision to sever the military intelligence agreement comes at a time when North east Asian regional tensions are again at a high, with North Korea’s latest missile tests, as well as the South China Sea conflict.

US interests in Asia

The Trump government will be anxious to keep both Japan and South Korea as key allies in Asia, to counter the threat from China and North Korea.

The military intelligence pact that South Korea has severed is the General Security of Military Information Agreement, or GSOMIA. This went into effect in 2016, and was essentially a product of the Obama administration. Japan has also long served as a US ‘satellite’ in Asia, hosting many US bases in Okinawa.

The Chinese government has previously distracted attention from domestic problems by appealing to nationalist sentiment, organizing military parades to coincide with newly created national holidays commemorating key days from the World War 2 conflict with Japan. There have previously been large scale riots, where Japanese cars were burned and businesses attacked.

Although riots on such a scale may not be likely in South Korea, it is crucial to emphasize the need for the working class of Asian nations to link their struggles against a common enemy: the capitalist, imperialist system.

The crisis in relations between the two countries underlines their interdependence, both economically and as client states of US imperialism. It also shows the inability of capitalism to overcome the contradictions of the nation state and the poisonous legacy of the 20th century.

With living standards and working conditions under attack in both Japan and South Korea, the working class has no interest in threats and retaliatory measures, and in both nations must jointly fight to break with capitalism and for a socialist federation of Asian nations.