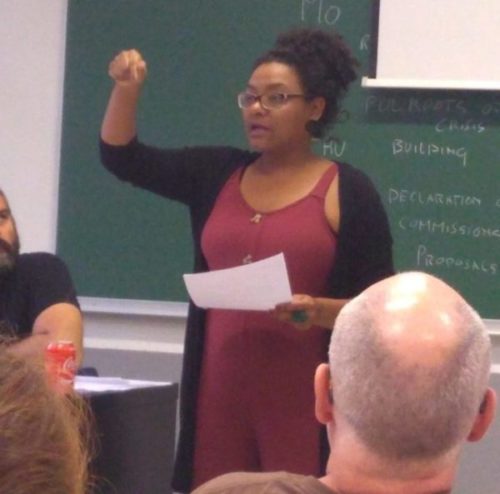 At the IEC meeting from August 12 to 16, comrades from 25 different countries examined the origins and impact of the women’s movements around the world, and its connection to changes in the working class and its movement, in a lively session on socialist feminism.

Women in struggle around the world

While the #metoo movement uncovered the misogynist power structures in culture, sports, law etc. it also ushered walk outs led by female workers in McDonalds and Google against sexual harassment around the globe. Moreover, the increasing protests against gender violence in Argentina, Italy, Spain and elsewhere were discussed as being linked to social and economic backlashes by the working class on the one hand, but also an increasing anti-sexist understanding and a growing need and wish of  women to break free from of misogynistic violence, on the other.

The strikes in the education sector in the U.S., Brazil, Poland and the U.K. amongst others, where also mainly carried out by women who represent the bulk of workers in the education sector. Strikes in the health sector for equal pay – such as in Glasgow last year or at the Charité in Berlin for more staff and higher pay have also been seen frequently in the past couple of years, where women have also been on the front line.

Regarding backward and dangerous  restrictions on abortion access, we saw protests developing in Alabama (USA), in Brazil, Poland and successful movements in South Korea and last year in Ireland, where our comrades from the Socialist Party played a major role in the ‘Repeal the 8th’ movement. Slogans, strategies and the spirit of those movements were taken on by other active workers in their disputes which showed how the women’s movement can inspire working class conflicts in communities and workplaces alike.

In the same way,, the idea of a ‘Global women’s strike’ has been raised by many activists in the women’s movement and debates are taking place about  how such a strike can be made successful and the role that the trade unions, left and revolutionary parties have to play. A rejection of the conservative and suspicious attitude that the CWI’s former International Secretariat (IS) who have split away from the CWI displayed towards burgeoning new mass women’s struggles was a key touchstone in the discussion.

In order to deepen our theoretical understanding, our perspectives for the women’s struggles around the world, and our practical socialist feminist work and interventions, the IEC discussed the formation of  a provisional International Women’s Bureau to push and coordinate international discussion and interventions. A joint global initiative on the 25th November, the international day to stop gender violence, was also proposed. A proposal for a  new International Women’s Bureau will be discussed at the World Congress in January 2020.

The session at the IEC meeting on Socialist Feminism was introduced by Laura Fitzgerald from the Socialist Party, Ireland. She referred to the recent case of billionaire financier, Jeffrey Epstein, who had demonstrably built up a whole network to sexually abuse women and children. Disgustingly, even one of his private planes is said to have been called ‘Lolita’. His close ties to the Clinton family and other representatives of the ruling class indicates the culture of exploitation and oppression which is rife among the world’s elites. . This case, the case of Harvey Weinstein, and many others, show that sexism is deeply woven into the structures of capitalism.

The question of how we analyze movements against sexism is closely related to the question of how we intervene in these struggles. Elin Gauffin from Sweden summed up the argument in her closing remarks, by saying that sexism is not like a tap that is turned on and off again, as if the ruling class can simply orchestrate it. It is a structural everyday feature of capitalism, with different characteristics in different regions and countries and has to be discussed very concretely.

A positive and energetic,  yet critical political engagement with the global women’s movements will help to increase the confidence and political ability of all sections  of the CWI to intervene in these struggles. It will also help comrades to play a decisive role in these movements in the future by introducing revolutionary Marxism and the idea of independent democratic working-class power in mass struggles, that can break with liberal and establishment feminism. In this way we can build a socialist feminist movement that joins its forces with all other struggles against oppression and the wider  working class movement against capitalism.

Since the 1970s, as well as an overall growth in the size of the working class globally, wages in the industrial sector were more and more reduced due to neoliberal attacks and outsourcing. This  destroyed the “single bread-winner” model in regions where it existed. More women were thus forced to work part-time and increasingly full-time, on top of their unpaid domestic work.

At the same time, new capital accumulation strategies were found in the privatization of the “reproduction sector” (i.e. education, healthcare, cleaning and fresh food production etc). This labour cannot easily be automated, which means that productivity is very low in comparison to industrial and IT sectors. It also means that these sectors encompass comparably huge workforces, mostly made up of female and  migrant workers. To increase productivity, workers in these sectors are under constant attack through attempts to introduce ‘lean’ production, surveillance, wage cuts, increasing the working day etc.

This is why we saw workers in precarious food chains such as McDonalds and Kentucky Fried Chicken and in food delivery chains, like Deliveroo, entering into strike action. Furthermore, especially teachers and nurses have seen the constant worsening of living standards of the working class in their interactions with school students or patients and their families. Thus, it is no wonder that we observe struggles in education, health care and social care around the world: In 2018 and so far this year, strikes in education took place  in the U.S., in Brazil, in the UK, in Poland and many other countries, tackling new pension schemes and pushing for higher wages.

To  the forefront of these battles, going through important  new experiences of struggle under capitalism, is a mostly female and migrant proletariat. Defecting this, trade unions have started   to drastically change in regard to their membership. While the size of trade unions in more male-dominated private and industrial sectors has declined, it has grown in the public and service sectors, organizing the newly active workforce of women and migrants. From that perspective it is more understandable that this section of the working class is also more prominently  involved not only in fighting on workplace issues, but in fighting against oppression of all kinds.

Jane Barros of LSR (CWI in Brazil) reported that in Brazil, the movements against pension reform, the destruction of indigenous peoples’ land and habitat, cuts in education and systematic violence against the Afro-Brazilian population were led primarily by women. In some cases, these have been the same women who participated in  the teachers strikes against the labour and pension reform previously. Prior to the election of the extreme right-wing president, Jair Bolsonaro, it was mainly mass demonstrations by women who took to the streets against him under the slogan #elenao (not him).

In the U.S., in West Virginia and other states, teachers organized wildcat strikes to challenge low pay. Many of  them, before or afterwards also attended the women’s marches against Trump or were inspired by it. In Poland, teachers went on strike, also partially inspired by the women’s strike movement against attacks on abortion rights in October 2016.

In many recent examples, trade union leaderships were  challenged in the course of these disputes. In the kindergarten nurses strike in Germany 2015, in Brazil, Poland, the U.S. and in the university strike in the U.K. last year, the trade union bureaucracy was overwhelmed, either by a membership that boldly refused laughable ‘negotiation results’ and  on wildcat strikes, or organized their protests independently of the trade union officials. This is a development that we will see increasing in the struggles of the near future, and will have to to learn from. It shows that the boldness of a new layer of activists has begun to make an imprint on the situation.

Mametlwe Sebei from South Africa pointed out that both racism and sexism are central pillars of capitalism and that this is also evident in South African society. Using the example of a mining strike against sexual harassment, he explained that awareness within the working class as a whole on the issue of sexism had changed considerably. There has also been enormous progress in the male-dominated heavy and mining industries with a greater  rejection of sexism, which was recently expressed in this strike.

This also counts for the development of mass uprisings. Céderic Gerome from the former IS minority analyzed the role of women in the Arab Spring protests in Tunisia and Egypt and in the current mass movement in Sudan, where about 70% of the activists were young women. He also pointed out that the Saudi Arabian elite in particular was massively benefiting from the oppression of women and that a relaxation of anti-women laws could also destabilize the regime there, which rests upon dictatorial repression, with any deviation from that being a signal to the masses that the regime can be challenged. In the Spanish state, mass strikes against sexual violence and sexism have been organized for the last few years on 8th March growing in size and strength under the impact of  austerity measures and authoritarian and right wing attacks on protest movements.

Apart from the debate of global women’s movements, which developed differently in different countries, the discussion also dealt with how best to prevent sexual harassment in our movement and party, and how to best deal with it if it does arise. It was also in this context that the IEC agreed to establish a provisional international women’s bureau which on the one hand, can  help analyze current movements on sexism and women’s oppression and, on the other hand, raise awareness on these issues and collect experiences on how to develop the organization in this respect. This can help ensure that more female comrades will have the space and security to become active in the front line of our international organization and the workers’ struggles and movements which have developed  and will develop worldwide.