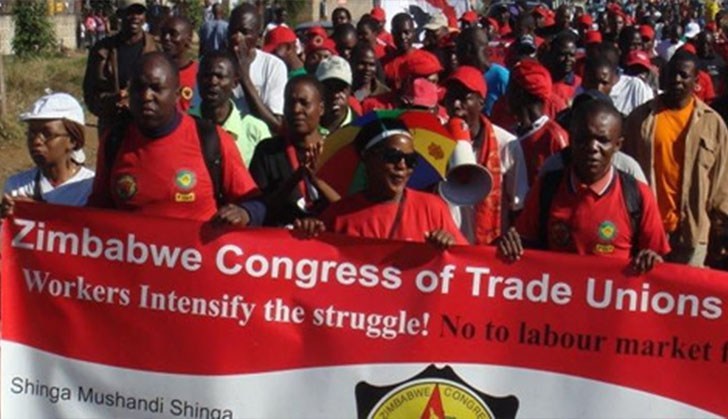 On August 16, the regime in Zimbabwe brutally attacked street demonstrations against the country’s seemingly endless economic and political crisis. The ruling elite fears a protest revolt such as in Sudan, having clearly seen the strength of the masses in action in the three day general strike which took place in January.

After the toppling of long-time dictator Robert Mugabe through a military coup in November 2017, there was some anticipation that the ZANU-PF regime, now under Emmerson Mnangagwa, would adopt a different path and turn away from the repression and barbarism which characterized Mugabe’s rule. The coup was an elite’s response to the groundbreaking protest movements which began in 2016. The masses largely welcomed Mugabe’s demise but had few illusions as to whether it signaled the collapse of his regime.

In 2019, Mugabe’s regime remains in power, with one of his lieutenants having succeeded him and having successfully managed to glue together a coalition of factions within the regime itself. Since his installation, Mugabe’s former right hand man Mnangagwa has intensified the already dire crisis. A third of the 16 million population is now estimated to be starving, according to the UN. The crisis has been worsened by years of drought and the Cyclone Idai which ravaged parts of the country early in the year, for which the regime has been ill-fated to prepare and provide relief.

The regime has introduced what it calls the Transitional Stabilisation Programme, an austerity-riddled policy, as its main economic blueprint. It has imposed a two% tax on electronic transactions, which previously cushioned the shortages of hard cash money for the masses. The regime has recently touted this tax as having resulted in a budget surplus of US$500 million. In January this year, Mnangagwa announced a fuel price hike of 150%. This has deepened the shortages of food and basic living necessities such as water and electricity for the masses. In June. the rate of inflation took an exponential turn, rising from 98% to a staggering 176%.

These reactionary measures have only served to intensify the starvation and abject poverty of the masses. All of this is not new, as the regime has always sought to make the working class and impoverished masses pay for its own induced crises. Since the early 1990s, neoliberal austerity measures that in practice exempt political cronies and bureaucrats have become permanent features. In the midst of shortages of basic needs such as food, fuel and basic medication in public hospitals and clinics, ZANU-PF elites are seen lavishly spending millions of dollars on luxury goods such as exotic supercars. Recently, it was exposed that officials and cronies had embezzled a total of US$16 million from the NSSA, the country’s central pension agency.

As the crisis deepens, Zimbabwe has seen frequent and spontaneous episodes of mass rebellion from the Tajamuka/Sesijikile protests in 2016 to the more recent insurrection against electoral fraud which was brutally thwarted by the regime in August 2018.

The Zimbabwe Congress of Trade Unions responded to the fuel price increase in January with a three-day general strike that shook the regime and demonstrated the yearning of the masses to move beyond spontaneity into more organized and concerted forms of resistance. The effectiveness of the ZCTU general strike was remarkable from a trade union federation that operates against the backdrop of a staggering 90% rate of unemployment and two decades of deindustrialisation.

The success can in large part be attributed to the struggles of public sector workers, mostly comprised of school teachers and healthcare workers. Teachers and nurses receive slave wages equivalent to US$80 a month or US$2.50 a day. The total withdrawal of labour over the course of three days in January unmasked the redundancy of the regime. The general strike had a far reaching impact, to the extent that riot police could not report to work (either out of solidarity or because the sheer impossibility of quelling the incredible rebellion that simultaneously hit the townships in both Harare and Bulawayo). The turnout by unemployed youth, students and working class and poor communities was massive – an insurrection sparked and made possible by the ZCTU general strike.

What followed the strike was the expected brutality, typical of the regime. After the three-day strike had ended, the regime unleashed soldiers into the townships to beat, torture, maim, kill, rape and commit all types of atrocities.

The leaders of ZCTU, its president and general secretary, continue to be in and out of jail over the January strike, and continuously face death threats. Since this flexing of muscles by the masses in January, the regime has continued to abduct, torture, assault and detain activists who are vocal against the regime, from trade union leaders to those in civil society.

Opposition party (MDC) members have also not been spared by the regime’s barrage. For the masses, the turn to increasingly violent methods by the regime serves as a barometer of the increasing precariousness of the regime’s grasp on power.

We agree with Alex Magaisa of the Big Saturday Read Blog where he observes that the regime is currently at a ‘cul–de-sac,’ unable to negotiate its way out of bankruptcy and insurmountable debt, and unable to convince even some of its traditional backers in both Beijing and Pretoria to provide debt relief.

The regime has incorporated the structural adjustment policies of the International Monetary Fund such as reducing the public service wage bill, which was swiftly carried and resulted in the retrenchment and unemployment of thousands of public workers as well as the erosion of working conditions. In the face of protests, teacher strikes, the general strike and the possible all-out rebellion these could spark, however, the fearful regime has backtracked and on three occasions raised wages to allow for some (wholly inadequate) compensation for rampant inflation. Part of the austerity policies is the reimposition, in June, of the Zimbabwe dollar that was abandoned in 2009.

The regional ruling classes’ solidarity with the regime in Harare has remained unshaken however, with Mnangagwa having been recently appointed the Chairperson of the SADC Troika on Politics, Peace and Security (Southern African Development Community has 15 member countries). The EU, despite its repeated condemnation of the human rights abuses, has remained open to ‘re-engagement’ with the regime.

While the MDC willingly participated in the fraudulent elections hosted by the regime in July 2018, outside of the elections it has for long called for dialogue with the regime as a way out of the crisis. After the crisis deepened in 2009, the MDC entered into a coalition government which in so many ways rescued the regime from being cast into the dustbin of history.

The call for the present mass protests by the MDC should be seen as being part of realizing its program which is to force the regime into a negotiated settlement. The MDC seeks to reform a capitalist crisis by negotiating with its creators and getting into the same government with it. Their program consists of phrases such as “good governance”, but lacks any real alternative, ultimately only expressing hope for foreign loans.

The increasing frequency of public demonstrations against the ZANU-PF regime indicates that the fear tactics used by the government while still effective enough to discourage most, are not as effective as before.

The period since 2017 underlines that a change in the country’s president was not in and of itself sufficient for the country’s condition to improve. Removing ZANU-PF from power is critical. However, removing ZANU-PF from power will be a futile endeavor if there is no clear program. There is still a large vacuum that the MDC, ZCTU and the social protest group, Tajamuka, are not able to fill.

The demonstrations on August 16 were prevented from going ahead as planned and the MDC was forced to call off the demonstrations after a failed court appeal. Nevertheless, some protestors took to the streets. The violent reaction from the police is a clear example of the state’s armed thugs in action! Zimbabwe exemplifies the role of the state in maintaining the power of the elite and protecting their interests.

The task to overthrow ZANU-PF as well as the capitalist system in Zimbabwe remains. A concerted effort to unite the employed sections of the population, the urban as well as the rural populations must be made. Nearly forty years of “freedom” in Zimbabwe shows that true freedom must mean socialism and it is a socialist program – a program for the organized workers, youth and poor communities taking over all key economic resources such as the mines, the big farms, factories and banks and running them democratically for the needs of the majority, not the looting of an elite – that can unite the brewing struggles and at last lead them to victory. Removing ZANU-PF and placing another party in power would not be worthwhile if capitalism, with its inherent exploitation and plunder of human and natural resources, remains. In such a case, we would find ourselves having to demonstrate against that regime in the near future.