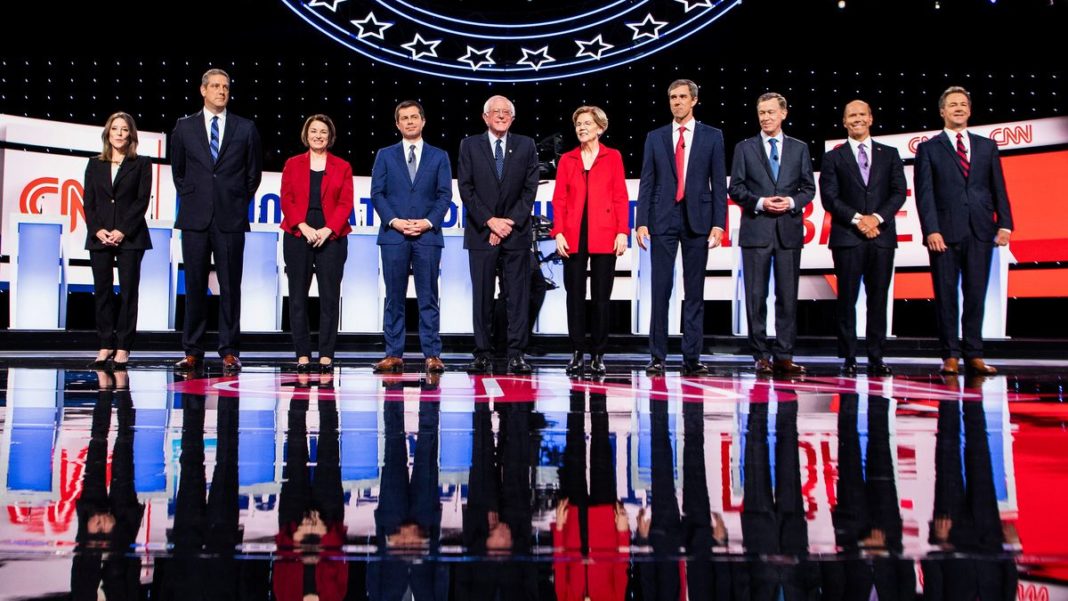 In July, the Democratic Party had another two nights of debates between a crowded arena of 20 presidential candidates, including Bernie Sanders, Elizabeth Warren, Joe Biden, and Kamala Harris. In contrast to the June debate, instead of trying to occupy the left, many candidates defended status quo politics, calling for a return to “pragmatism” and a need for policies “grounded in reality.” About the Green New Deal John Hickenlooper said, “You might as well FedEx the election to Donald Trump.” For most Americans, this means acquiescing to the wants of the pharmaceutical companies, big corporations, and the needs of the billionaires as opposed to the interests of working people.

In the first night, however, these attacks were swatted away by the fiery performance of Bernie Sanders and a powerful performance by Elizabeth Warren defending policies such as taxing the rich and fighting for a single-payer, Medicare for All plan. In a moment that has since gone viral, while Bernie Sanders was making the point that union members will be better off under a comprehensive Medicare For All plan Tim Ryan interrupted him to say “You don’t know that Bernie.” Without missing a beat, Bernie fired back “I do know it, I wrote the damn bill.”

The second night was primarily defined by Joe Biden digging in his heels to defend the Obama years and the status quo while other candidates like Kamala Harris and Julian Castro tried to occupy the progressive space. Joe Biden called Medicare for All “a bunch of malarkey,” equating a tax increase to pay for it with a deductible out of your paycheck. As much as the second night was about Biden defending the status quo, many commentators are acknowledging that the progressive wing, represented by Bernie and Warren, were the overall winners of the debates.

The debates featured CNN asking questions using right-wing talking points and giving lesser known candidates opportunities to fire away at Bernie and Warren. The division within the Democratic Party is being further exposed as the left wing gathers momentum and the moderate wing pulls back.

A key question of this debate was what policies candidates are willing to fight for. The September debates will include far fewer candidates and no doubt continue the “attack the left” dynamics. As the primaries heat up, we will start to see the differences about how to fight Trump and his right-wing agenda as well as how to fight for working people as a recession looms.