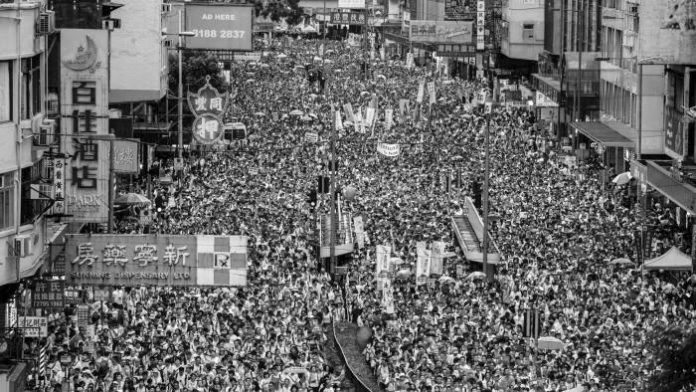 On June 16, an estimated two million poured onto the streets of Hong Kong to demand the complete withdrawal of a law to expand the scope of extradition to China. The law would have legalized the abduction of political dissidents, even those just passing through Hong Kong’s international airport, to stand trial in China. It was rightly understood as another attack on democratic rights in Hong Kong.

Only the day before this massive demonstration, Carrie Lam, the hated Chief Executive of Hong Kong, had announced the law’s suspension. Knowing that the government would reintroduce the legislation as soon as the movement faded, the protestors did not retreat but instead demanded more.

The situation in Hong Kong escalated quickly. Following the one-million-strong demonstration on June 9, calls for a one-day strike started circulating on social media. Then teachers, bus drivers and airline workers began petitioning their unions to join the strike. In the very early morning of June 12, 70,000 students and young people occupied the streets around the Legislative Council building. Police and the government responded with a level of violence never seen before in Hong Kong. They deployed more tear gas in one afternoon than they had in the entire 79 days of the 2014 Umbrella movement occupations and fired rubber bullets and bean bags into the crowds for the first time ever. Two students sustained life-threatening injuries.

On June 15, the following week, Lam announced that the law would be suspended and, in the same breath, strongly defended the extreme actions of the police. Rather than people returning home and claiming this temporary suspension as a victory, more than one quarter of the population joined massive demonstrations the next day, June 16. The question of whether Lam will follow the heads of state of Algeria and Sudan, both toppled by mass movements earlier this year, is complex and tied up with conditions in China.

What Will Xi Do?

Carrie Lam’s master in China, Xi Jinping president and leader of the Chinese “Communist” Party (CCP), has a difficult choice to make: removing her might release some of the pent up anger against the government and diffuse tensions, but handing the movement such a victory would embolden the growing opposition in Hong Kong and, critically, in China itself. Any “weakness” in Hong Kong, or retreat in the face of mass pressure, would immediately weaken Xi’s personal state capitalist dictatorship and help to fuel resistance by workers and students in mainland China. Even the suspension of the extradition law was further than Xi wanted to go and is seen as his most significant political retreat since his ascension to power in 2012.

Hong Kong’s Chief Executive is not directly elected by the people, but by an elite group of 1,200 wealthy electors. A new election held during the height of the mass mobilization would also bring to the surface the question of voting rights for the seven million people in Hong Kong who do not have a vote in choosing the Chief Executive and would fuel calls for extending democratic rights in both Hong Kong and China.

Under pressure from escalating trade tensions with the U.S., Xi had wanted to deal with the situation swiftly in Hong Kong and decisively. Clearly, that did not happen. The Trump administration is cheering on the struggle in Hong Kong, not because of any concern for democracy but because it could represent a weakening of Chinese imperialism.

The movement shows no signs of backing down and Xi cannot back down. If the movement fails to find the methods and program to win decisively, the dictatorship will come back for revenge.

As of now, the movement lacks organization and experience, but the mood to fight back opens many possibilities for new workplace committees to be set up, strike meetings and union organization drives in non-union sectors to be mobilized.

Socialist Alternative is in political solidarity with our co-thinkers in the Hong Kong/China/Taiwan section of the Committee for a Workers’ International, Socialist Action. Socialist Action is raising concrete proposals on the ground – such as strike action – and is advocating the type of struggle needed to defeat not only the Hong Kong puppet government but the much bigger dictatorship that stands behind it. This is in sharp contrast to some current movement leaders who lack a fighting strategy and limit their demands to democratic rights.

This movement and the emerging discussions about a political strike against the Hong Kong government’s antidemocratic law represents a historic new stage of the mass struggle that will have huge implications regardless of the outcome. The next important breakthrough is for the Hong Kong mass struggle to shed its isolationism to actively link up with the mass discontent rumbling beneath the dictatorships’ foundations in mainland China. This especially applies to the emerging workers’ movement in China which is facing even more ruthless repression, but has shown incredible heroism and strength. When these forces are united and organized around a new working-class party, with a clear program linking revolutionary democratic demands to a decisive break with capitalism, the dictatorship’s days are numbered.