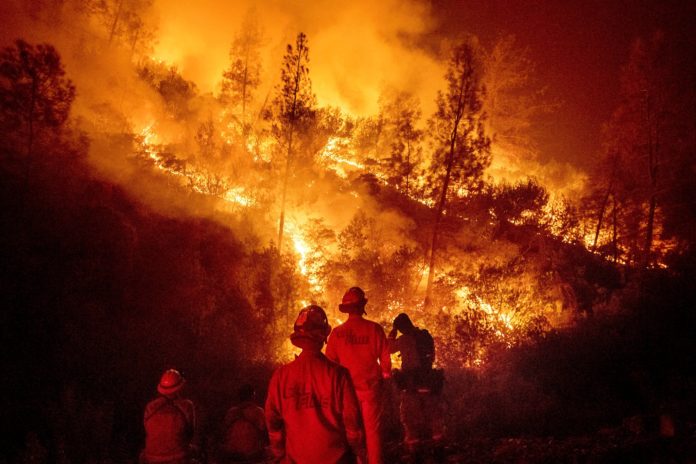 Early June 2019 threw Californians into our new normal: hot, dry summers and longer wildfire seasons. Cool, wet winters no longer mean less chance of fires, even in early summer. The growth from last winter’s rain and snowmelt is now drying up and turning it into as kindling for yet another dangerous summer of wildfires and poor air quality. Temperatures in many parts of the state rose to 30 degrees above normal as residents faced sweltering heat.

Residents of Northern California’s Yolo County have already faced flames and smoke, with the Sand Fire in June burning over 2,500 acres and 125 homes being evacuated. 600 firefighters were needed to bring it under control. This was just one of the 240 fires recorded in the state. The upcoming wildfire season will require workers to prevent and control the spread and damage. In previous years, California has used volunteer firefighter and prison labor to do these grueling dangerous jobs. The use of prison labor needs to end immediately and firefighters must be given fair and decent working standards and pay.

As families and working people continue to rebuild after last year’s deadliest fire season on record, state and federal officials are warning that this year is certain to see new disasters. It’s been estimated that 11 million, or 1 in 4, residents live in high-risk areas. Elevated temperatures that come with climate change mean prolonged droughts, longer fire seasons, bigger and hotter fires, and, consequently, dangerous air quality. Extreme weather conditions are being seen all over the country with dangerous heat waves, massive flooding, and tornadoes. Interstates have been closed due to flooding in Nebraska and Oklahoma.

On a larger scale, global warming means glaciers are melting at a rapid pace. Recently, scientists discovered that the permafrost in the Canadian Arctic is thawing 70 years earlier than previously predicted. “It’s an indication that the climate is now warmer than at any time in the last 5,000 or more years.“, said Vladimir Romanovsky, a professor of geophysics at the University of Alaska Fairbanks.

Recent statistics show that 100 corporations, overwhelmingly privately owned energy companies, are responsible for over 70% of global emissions since 1988. Corporate profits have dominated the use of global resources. Fossil fuel companies have a short term outlook so they will continue with the current carbon intense methods of energy production because it’s good for profits. These corporations, not individuals, are responsible for global warming.

Capitalism is the Problem

Corporate America and Donald Trump want people to believe that action on the climate is not in their economic interests. Liberal “solutions” feed this narrative. This is seen in previous attempts to slow global warming with things like gas taxes and challenging individual consumer choices. The individual consumer decisions of ordinary people is not enough to undo the damage that’s been done to the climate. The only way to combat climate change is by restructuring the capitalist economy and changing the real root of the crisis: corporate domination of resources and production management. We don’t have a lack of resources and wealth, rather a profound mismanagement of those resources by the corporate elite and the politicians they fund.

We can’t look to the free market to slow rising global temperatures. Energy production and resource management need to be taken from the hands of corporate CEO’s and put into the hands of the 99%. The only way forward is with an economy that is planned with workers deciding what is in the best interest of the planet and humanity; an economy planned with the long-term in mind rather than on the basis of capitalism’s short term logic.

The Green New Deal as it’s currently posed by Alexandria Ocasio-Cortez would be a tremendous leap forward, but it does not go far enough in taking on the energy giants. What we need is a democratically planned Green New Deal alongside a broader socialist transformation of society. This means workers in the fossil fuel industry being re-trained and moving into well paid and safer union jobs that would be created by the massive overhaul of the nation’s infrastructure that would be required. There also needs to be massive investment in high quality public housing and public transit as part of an integrated plan for urban development so people can live closer to their jobs. As a result we would have far fewer cars on the streets. This is in stark contrast to today where the shortage of affordable housing has led to long commutes for many Californians and to high-polluting traffic conditions.

By enacting and enforcing a Workers’ Green New Deal on the basis of a full scale break with capitalism, we can transition not just away from carbon-intensive energy and high emissions but also create a genuinely equitable system of production and resource management. The capitalist system cares nothing about the environment, only about profit. We need a bold socialist plan to manage decisions to protect the planet.