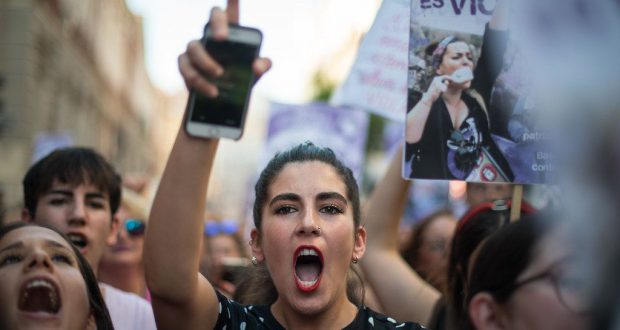 In an important victory for the mass feminist movement, the Spanish supreme court has increased the convictions in the Pamplona “Wolf Pack” case to 15 years imprisonment for the five guilty men. It also ruled that the 18 year young woman was raped and was not just a victim of the lesser charge of sexual abuse.

The scandalous case went on for almost three years and provoked a mass movement of women, and the wider working class and youth, whose slogans “yo sí te creo” (I believe you) and “no es abuso, es violación” (It’s not abuse, it’s rape) echoed around the world.

The case highlighted not just the sexual violence women suffer but also the indifference of the judicial system which is full of reactionary judges with backward sexist views. This is especially pronounced in the Spanish state, where the state machine is directly inherited from Francoism. All the judges who participated in the decisions to give the Wolf Pack rapists lesser sentences, which had kept them out of prison should be barred and the worker’s movement should demand a full review of the Spanish ‘injustice’ system. It should be replaced by a real justice system that is run by and in the interests of the working class and the oppressed with elected judges subject to the right of recall.

A victory for the mass movement

Clearly, the Spanish legal system has not suddenly ‘seen the light’ and corrected a terrible injustice because the system “works” as the politicians are claiming. No, the establishment have seen the mass movement of women and workers and they fear it. They have reacted to head off even bigger mobilizations. Credit is due to groups like Libres y Combativas and Sindicato de Estudiantes (Students Union) who boldly called the youth onto the streets to strike and demonstrate against the original verdicts, especially in the massive general student strike of May 10, 2018.

This is a big victory for the mass movement but there are numerous other cases of violence against women in the Spanish State and so the mobilizations and campaigning must continue until ultimately the sexist justice system is fundamentally transformed from top to bottom. It is also important to note that this victory has been achieved despite the role of the official leaders of the labour movement, who only took token action when forced to, due to unbearable pressure from below. A mass left and trade union movement built from below with a combative, revolutionary leadership could totally transform the situation and make victories against oppression, austerity and capitalism the dominant dynamic in the class struggle.

In the Spanish state, outrage at sexist violence and the impunity given to abusers by the justice system, has occupied a central place in the rise of the mass women’s movement and it needs to be recognized that the vast majority of violence against women takes place in the home/family, a daily nightmare faced by millions which is worsened by the impact of austerity cuts.

There are important parallels with other countries, for example with the #IBelieveHer protests in Ireland following the high-profile Belfast rugby rape trial, in which the Socialist Party (CWI in Ireland) and ROSA, the Socialist Feminist movement, played a key role.

The movement in the Spanish state has been at the epicenter of world women’s movements, both in terms of its scale – with millions repeatedly taking to the streets – and in how united working class action and methods of struggle have been to the fore. This was most significantly shown by the two magnificent feminist general strikes on March 8, 2017 and 2018 when millions of women and male workers joined in strike action and mass demonstrations. This is of great significance to socialist feminists internationally, and points a way forward.

There are now reactionary politicians who are openly criticizing the new verdict. Francisco Serrano, who leads the far-right VOX party in Andalusia, attacked the Supreme Court ruling saying: “the safest relationship between a man and a woman will only be through prostitution. From now on, the difference between having sex for free and paying for it, is that free sex could cost you more.”

Later, Vox’s parliamentary spokesman in the Murcia region, Juan José Liarte Pedreño, posted a Facebook message in which he insulted the Justice Minister Dolores Delgado calling her a “whore.”

The deep political polarization in Spanish society is now being clearly reflected in and through the mass women’s movement. As well as anti-worker and rabid Spanish nationalist rhetoric, the aforementioned far-right party, VOX, puts out a pronounced anti-feminist message.

The mass movement which has won the argument on the streets over the last few years has to remain vigilant and to continue the struggle to oppose violence against women, the Spanish unjust legal system and all reactionary politicians and judges. Rooting out the backwardness from Spanish state institutions like the judiciary can only be envisaged on the basis of a fundamental break with capitalism and a struggle for socialism. Building a democratic, working class revolutionary socialist party, with socialist feminism emblazoned on its banner, is a crucial task ahead.