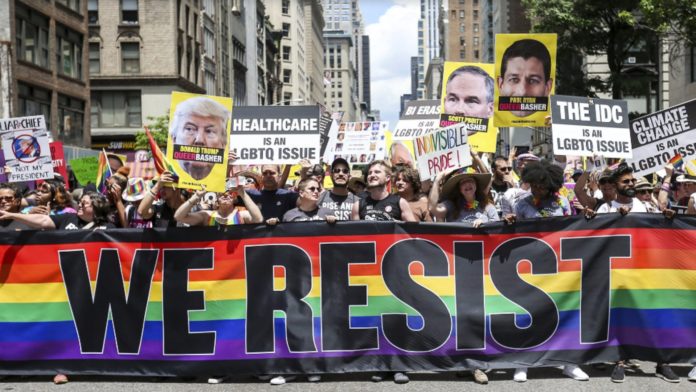 Fifty years ago the modern LGBTQ movement burst onto the scene. Mass anger at the repression of LGBTQ people had been bubbling under the surface. It exploded at the Stonewall Inn, a gay bar in New York City’s Greenwich Village. A routine police raid on June 28, 1969 escalated into a five-day rebellion in the streets that sent reverberations of “Gay Power” across the world.

Inspired by the massive shifts taking place in society at the time with the black freedom and women’s liberation movements, the Stonewall riots represented a determined fight against the system for the right to live openly and safely. Stonewall was a turning point for LGBTQ struggle in the U.S.

Workers and youth should take inspiration from this history and apply the lessons to the struggle for LGBTQ rights and the fight against Trump and the right wing today.

Trump and the Right Wing’s Attacks

The election of Trump and his notoriously anti-LGBTQ Vice President Mike Pence has been a serious threat to LGBTQ rights. Trump’s Department of Health and Human Services (HHS) threatened late last year to narrowly define gender based on sex assigned at birth which would have essentially legalized and condoned discrimination against transgender people in all areas of life.

Just last month HHS announced a regulation that would allow medical providers to refuse services to LGBTQ patients, including lifesaving care, based on their personal beliefs. This measure would be throwing gas on the flames of an already dire situation. In the 2015 U.S. Transgender Survey, 23% of respondents did not see a doctor when needed because of fear of mistreatment, and 33% did so because they could not afford it.

Young People Ready to Fight Back

Despite these attacks and the oppression that LGBTQ people face today, society has moved a long way toward acceptance of LGBTQ equality. This shift was not an inevitable result of the passage of time, but instead the direct consequence of decades of fightback.

These inspiring struggles have influenced a whole generation of young people who are rejecting transphobia and homophobia at unprecedented rates and are looking for solutions to the increasingly unequal society we are facing. Tremendous support exists today to expand on the previous victories of the LGBTQ movement, and build a coordinated national movement for improved Medicare for All, LGBTQ inclusive affordable housing, and to fight discrimination and bigotry in all its forms.

In addition, the #Red4Ed teachers strikes have shown that movements are strongest when they are broadened out to reach and engage the widest possible layers of people. Teachers and staff went on strike for more than their own wages and benefits; they fought alongside parents and students for better learning conditions. This is a shining example for the LGBTQ movement about the power that working people can have when we unite and fight together.

June is now marked by pride parades in almost every city in the country which serve as an important demonstration of visibility. Unfortunately, these events are now dominated by corporations and big banks – pushing grassroots activism and politics to the side. This means that corporate Democrats are featured despite not showing any real lead in opposing Trump or fighting for the policies the majority of LGBTQ people need. Big banks and corporations, like Wells Fargo and Walmart, who claim to support us are the same ones paying us poverty wages, funding mass incarceration, and destroying the environment. How can we count on these companies or the corporate politicians they support to represent us?

Shifting attitudes alone is no guarantee; in a system that is stacked against working people, we will need a strong, organized movement open to full democratic participation to win real victories. We need to bring the fierce determination of Stonewall to the fight against Trump and the far right. The kind of movement necessary to take down Trump and win gains for LGBTQ people will have to built from the ground up, and be based on solidarity between all working-class people. Our movement must depend on our collective strength, not the cynical “support” of billionaires or their bought-off politicians. We need tactics like mass rallies, marches, strikes, and civil disobedience.

What Will It Take To Win?

The LGBTQ movement should celebrate Pride month by organizing explicitly political mass rallies to fight discrimination and demand Medicare for All that would include mental health services, reproductive health care, and transition-related care. Our movement should reach out to labor unions supporting Medicare for All, especially health care workers, and reproductive justice organizations fighting to defend Roe v. Wade. Unions should also actively reach out to LGBTQ organizations and participate in the struggle for equal rights.

On the 50th anniversary of the Stonewall Rebellion we can draw inspiration from its participants who showed a courageous rejection of the status quo. By standing shoulder to shoulder with movements of all working and oppressed people we have the power to topple the current capitalist system and build a socialist society based on democracy and human need, where each unique individual can thrive free of discrimination and bigotry. A socialist world is possible!