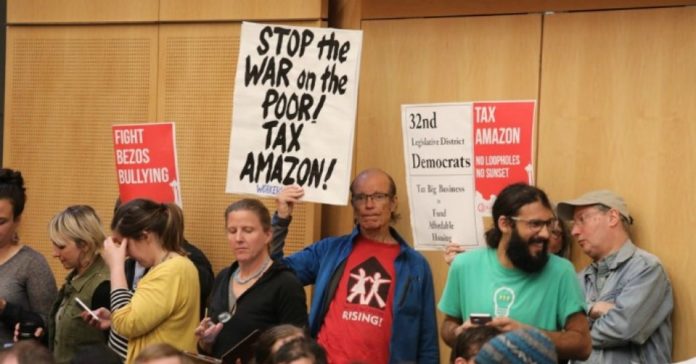 The business-backed campaign to defeat Kshama Sawant is likely to  make this City Council race the most expensive in Seattle history (the 2015 campaign to unseat Sawant set the previous record!). Three months before the August primary, which will select the top two candidates to face-off in the November election, the Chamber of Commerce PAC has already amassed over $700,000.

Amazon alone donated $200,000 to the Chamber’s war chest, with more likely to follow, according to a Seattle Times feature titled “Seattle’s Business Lobby Sees Opportunity to Unseat the City Council’s Progressive Majority.” This comes one year after Jeff Bezos shut down construction on a new skyscraper to economically blackmail City Council to block the “Amazon Tax,” which was passed unanimously following a grassroots campaign led by Sawant, Socialist Alternative, and a wider Housing for All coalition.

Yet under continued pressure from Amazon, the tax was repealed just a month later. Sawant was one of just two councilmembers to vote against the Amazon Tax repeal, a reversal orchestrated by Mayor Jenny Durkan whose 2017 election victory was bought with $350,000 from Amazon.

Reflecting the growing anger at Jeff Bezos’ role in Seattle politics, a recent statement by 21 “concerned members of the Democratic Party’s 37th Legislative District” protested “the aggressive plans of Jeff Bezos and the Chamber of Commerce to unseat Kshama Sawant… and the Chamber’s attempts to buy this election. As Kshama has emphasized from the beginning, what’s at stake in this election is who runs Seattle – Amazon and big business, or working people.”

A few days later, Sawant “score[d] a ‘no consensus’ victory in the 37th” Democrats, as the Capitol Hill blog put it, in a contentious vote at their 150-strong meeting (because Kshama is not a Democratic Party member, their rules preclude an endorsement).

Calling for comprehensive rent control and taxing big business to fund a massive expansion of publicly owned social housing, Sawant’s reelection campaign is gaining momentum. However, business remembers how Sawant’s previous election victories spurred on successful movements to win a $15 an hour minimum wage in 2014 and landmark renters rights legislation in 2016, among other gains. Their fear of a new powerful movements for rent control and taxing the rich is motivating them to go all-out to defeat Kshama.

Democrats Stand with Kshama Against the Chamber of Commerce PAC

Published May 17, the following statement was signed by 21 members of the 37th Legislative District Democratic Party to make the case for rank-and-file Democrats to back Kshama Sawant’s reelection. This support comes despite Socialist Alternative and Kshama Sawant’s sharp criticism of the Democratic Party, and calls for left-wing Democrats like Bernie Sanders to help launch a new party for working people. Notably Kshama Sawant is the only Seattle City Councilmember, and only candidate in her race, to support Bernie Sanders’ presidential campaign.

On Sunday the Seattle Times ran a feature article headlined Seattle’s Business Lobby Sees Opportunity to Unseat the City Council’s Progressive Majority. The article outlines the aggressive plans of Jeff Bezos and the Chamber of Commerce to unseat Kshama Sawant and Lisa Herbold, and win a City Council majority for big business.

Amazon has already donated $200,000 to the Chamber’s PAC, a corporate war chest now at $702,277 and expected to grow substantially in the weeks ahead. The article suggests Jeff Bezos is prepared to spend substantially more to expand his already outsized influence over City Hall.

We are concerned members of the Democratic Party’s 37th Legislative District, which will decide this coming Monday (May 20th, 2019) whom to support in the District 3 election. While Kshama is not a member of the Democratic Party herself (she’s with Socialist Alternative), we feel strongly that the 37th LD should stand in solidarity with her against Bezos’s bullying and the Chamber’s attempts to buy this election. As Kshama  has emphasized from the beginning, what’s at stake in this election is who runs Seattle – Amazon and big business, or working people.

Sawant is trained as an economist and taught at Seattle University and SCC before winning a seat on city council in 2013. She has been at the forefront of building effective grassroots campaigns to push Seattle politics in a more progressive direction, benefitting working people, students, and seniors – of all political stripes. She’s helped to win a host of bread and butter victories for those normally at the margins of city politics, including the historic $15/hour minimum wage.

Her office worked with the indigenous community to end Columbus Day, and usher in the Indigenous People’s Day. Fighting alongside tenants, Kshama prevented 400% rent hikes at the Seattle Housing Authority, and won legislation mandating voter registration cards be included in tenant information packets by all landlords. The People’s Budget movement, in part initiated by her office, has won millions of dollars for affordable housing and social services. Throughout her five years in office, she and her staff have stood up for countless workers and renters facing abuse from corporate landlords and bosses.

While all this has been great news for most of us Seattleites, it’s made Kshama the target of a ferocious right-wing hate campaign. It’s exactly because Kshama has been so effective at winning progressive change that Seattle’s most powerful business leaders are so determined to drive her, and the movements she’s helped organize, out of City Hall.

To give one example, in 2016 Kshama’s office led the way to winning two landmark renters rights laws — a limit on move-in fees and a ban on rent increases in buildings with code violations. She also played an important role helping to win a law to curb widespread discriminatory practices in rental housing. This was despite the big landlord lobby group RHA spending $52,000 to oppose these vital protections for Seattle renters.

Referring to their failed efforts, now-retired RHA lobbyist Jamie Durkan (yes, he’s the Mayor’s brother) bitterly complained that, “Anybody who spends a dollar lobbying the Seattle City Council is wasting a dollar.” Durkan said other Councilmembers would “say all the right things in their offices, then they get out of the podium and it all goes south.” The lobbyist chalks up his failure to “Sawant’s army,” referring to the organized renters, working people, and community members who worked with Kshama’s office to finally have their voices heard and rights respected in City Hall.

Kshama also works hard on local, community issues. Just in recent months, Kshama has worked with seniors to save their homes at Halcyon Mobile Home Park from corporate developers, brought the Central District community together to demand a new Post Office, and organized hearings in City Hall with seniors and community activists to demand permanent community protection for the Central Area Senior Center and Byrd Barr Place, two vital institutions in our city. Kshama has been working to save small, immigrant-owned businesses in central Seattle, like Saba Ethiopian Cuisine, and has begun strategizing with small business owners on how to combat their displacement by fighting for commercial rent control.

Across the country, grassroots Democrats are standing up to the corrupting influence of corporate PACs and wealthy donors, over our Party and our democracy. We need to do the same here in Seattle. We did the right thing backing Kshama’s 2015 re-election primary campaign, when both the 37th and 43rd LD Democrats voted for “no endorsement” (given that our rules don’t allow formally endorsing candidates who are not members of the Democratic Party).

Since we cannot endorse a candidate who is not part of the Democratic Party, please join us in voting “no endorsement” at the 37th District endorsement meeting on May 20.  Thank you.