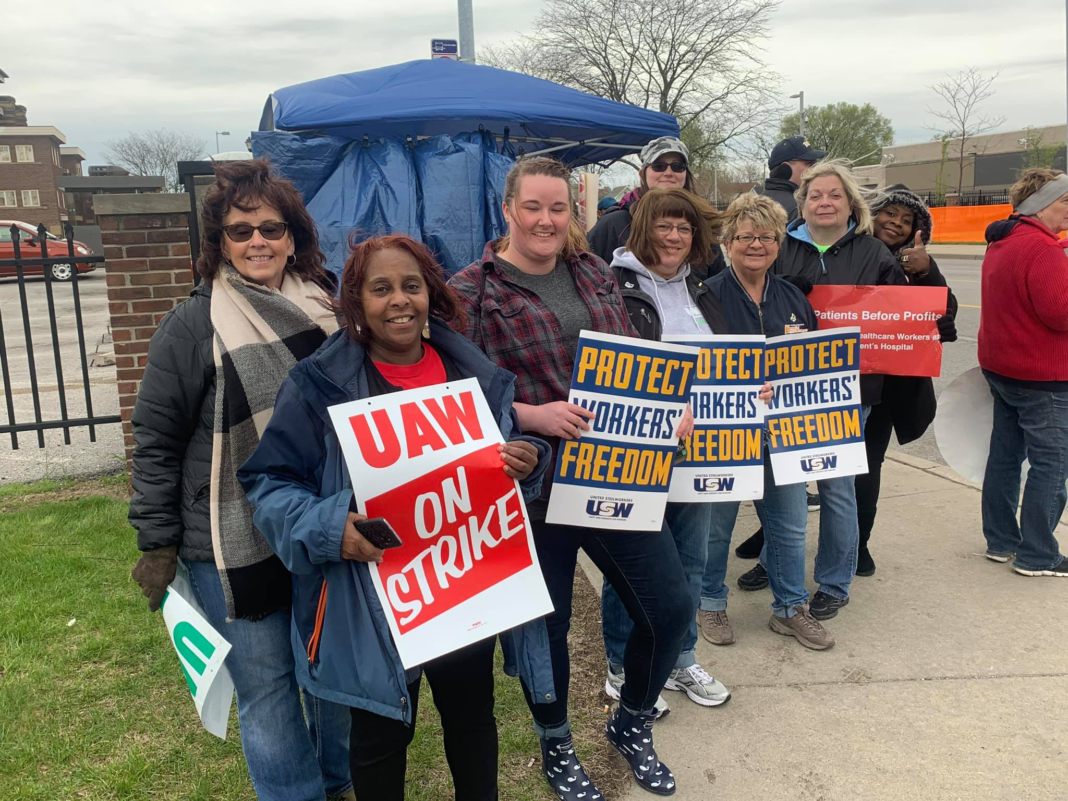 On Monday, May 6, thousands of nurses, technicians, and support staff at Mercy Health St. Vincent Medical Center in Toledo, Ohio went out on strike after contract negotiations came to an impasse over key issues. United Auto Workers (UAW) Locals 2213 and 12, which represent the workers, had been negotiating with Mercy Health since July 30. The call for a strike was made after the two bargaining units rejected Mercy Health’s final offer.

Central issues to the strike are health care costs and on-call hours. Currently, nurses are working under an expired, open-ended contract that allows employers to increase the costs of their health plan deductibles at any time. Hospital staff are negotiating for fixed costs for health care premiums over the course of the next three-year contract.

By opting for an employee health plan with higher deductibles, Mercy Health is putting more of the costs of health insurance on workers, effectively wiping out any wage increases – all in the name of profits. Employer-provided health insurance, as a system, is failing as the rising costs of health care – mostly caused by price gouging at every step – are pushed to working people.

Excessive on-call hours are another ongoing issue affecting hospital employees. Some nurses report being on-call for over 2,200 hours in a year – more than 40 hours a week in addition to the hours worked in the hospital. The broader crisis of understaffing in hospitals has further exacerbated this issue. At St. Vincent, hospital staffing has declined by 26% in the last two decades. To make up for this, the hospital often uses on-call nurses. While being called during on-call hours was once an exception, it is now the rule. As a result, nurses work extra long hours, ending up fatigued and sleep deprived, which leads to increased risks for patients.

Gaining Broader Support for the Strike

After two weeks, the strike has already attracted broader support. Ten nurses and staff at Mercy Health Cancer Center and St. Anne Hospital joined the walkouts. On Thursday, a parade of over 100 Jeeps driven by UAW members from the Fiat Chrysler Automobile plant showed their solidarity to picketers at St. Vincent.

Bernie Sanders also tweeted his support for the strike, saying “Nurses and staff at Mercy Health St. Vincent Medical Center in Toledo should not be working 20-hour shifts without decent health insurance, while the CEO of Mercy Health makes $1.7 million,” and that “Without a strong, dedicated nursing workforce, no hospital can provide the quality care patients deserve.”

This strike comes in the wake of a massive resurgence of labor uprisings, from the teachers’ strikes to Stop and Shop workers. As those struggles have shown, further mobilization of the community and workers in other sectors, combined with militant tactics, can win the demands that workers need. We need to fight to take profits out of health care. A Medicare-for-All system would be a huge step in that direction. But even with Medicare for All, the the broader capitalist system will continue to try to make money off our illnesses. Working people can’t afford a sick system with a lack of access to quality health care that results in understaffed and overfilled hospitals.