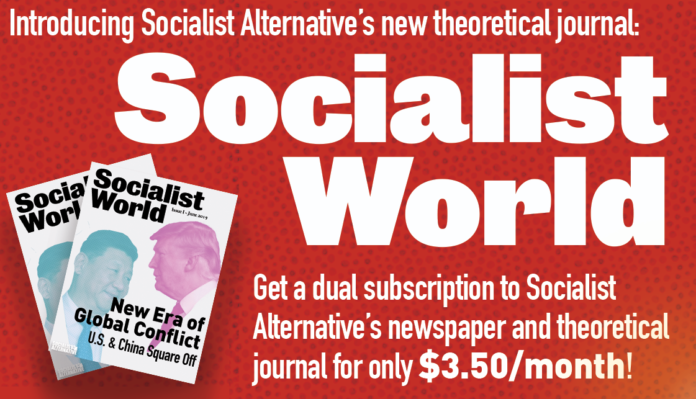 Massive interest in socialist ideas has radically changed the political landscape in the U.S. As part of the growth of the left, Socialist Alternative also grew significantly in recent years and achieved national prominence with the election of Kshama Sawant as the first openly socialist councilmember in Seattle in 2013. Our organization prides itself on the clarity of our analysis and program, but we also feel the need to step up our game. For this reason we are launching a political journal Socialist World, initially coming out three times a year.

How We Got Here

The economic crisis of 2008-9 opened up a new era in the U.S. and internationally. Capitalism was exposed as an increasingly parasitic system without any vision for the future. There was fury at the status quo which has not ended. Political institutions lost authority and mainstream parties in many countries have either disintegrated or come under intense pressure from the left and the right.

Beginning in 2011, revolutionary “Arab Spring” developments occurred in North Africa and the Middle East. Workers in Southern Europe fought back ferociously against austerity policies that sought to put the cost of the crisis on the shoulders of ordinary people. But the crisis also demonstrated the inadequacy of the existing left and the leadership of the trade unions. Social democratic parties which had adopted neo-liberal policies were particularly exposed.

In the U.S., millions lost their jobs and homes. But initially there was no fightback as trade union leaders refused to do anything that would embarrass the Obama administration. The fightback began in January 2011 in Wisconsin with the revolt of public sector workers against the attacks of Governor Scott Walker. Then came Occupy, Black Lives Matter, LGBTQ struggles and the emergence of a new women’s movement. We are now seeing the beginnings of a new environmental movement internationally.

Polls showed a massive increase in support for “socialism” especially among young people. This was especially reflected in Bernie Sanders historic 2016 campaign when he called for a “political revolution against the billionaire class.” But Trump’s victory also showed the price we will pay for failing to build a political party based on the interests of working people and all the oppressed.

Now we are facing a new situation with a looming international economic downturn, new revolutionary upheavals in North Africa, the biggest strike wave in the U.S. in a generation and another Sanders presidential run. Millions want to fight back but to win requires leadership, a clear strategy and learning the lessons of past victories and defeats. This is the political task that Socialist Alternative has set for itself.

The Battle of Ideas

What does building a Marxist political force mean in practice? It means engaging in the living struggle as we are doing in the teachers revolt and the recent Stop and Shop strike in New England. It means fighting to hold the position won for socialism in Seattle where Kshama Sawant is standing for re-election.

It also means engaging in the developing battle of ideas on how to win serious, far reaching change. There is a hunger among hundreds of thousands of working people, young people especially, for a strategy to end massive inequality and the corporate domination of politics, address the developing climate catastrophe and root out racism and sexism in our society.

A huge space has opened up on the left with the growing popularity of socialism. This has been partially filled by Bernie Sanders, Alexandria Ocasio-Cortez, and the Democratic Socialists of America. AOC and Sanders have put forward a bold program that can be the basis for serious social struggle but they also accept the framework of capitalism and the Democratic Party. We need to clarify both the positive elements and limitations of these developments.

Socialist World will make the case for Marxism in the 21st century. It will also be thoroughly internationalist, carrying material from our co-thinkers in the Committee for a Workers International (CWI) around the world.

The first issue will come out in early June. It will feature articles on the conflict between U.S. imperialism and emerging Chinese imperialism; the lessons of the teachers revolt; the case for a new party; the meaning of revolution today; the issue of reparations and how this is playing out in the presidential elections; and more.