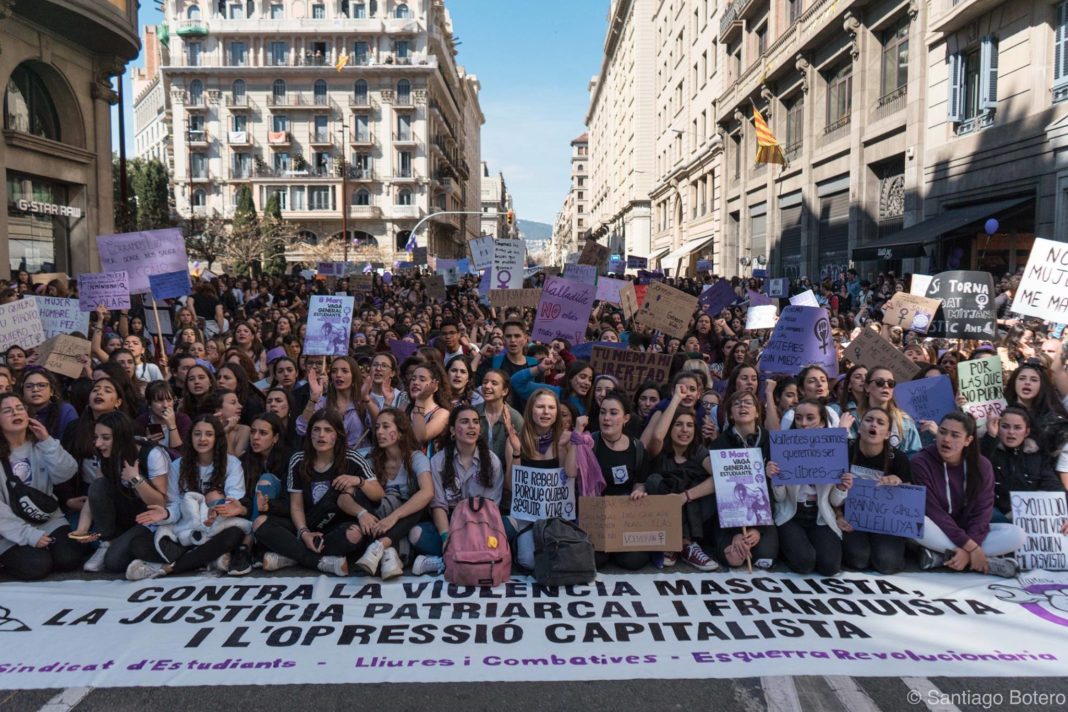 This International Women’s Day, as in 2018, women in Spain withdrew their labor, stopped the country, and took the streets sending a clear, strong message: the movement for women’s rights and gender equality is not going away!

In several countries around the world the traditions of International Women’s Day are being revived as working-class women are increasingly radicalized.

The day opened up with quiet and silent classrooms. Over 2.5 million students struck and more than 400,000 took the streets in the numerous morning demonstrations called across the state by the Student Union (led by Izquierda Revolucionaria, our sister organization in the Spanish State and their socialist feminist platform Libres y Combativas). The students were calling for inclusive sex education and an end to sexist violence, among other things.

Later in the evening one million demonstrated in Barcelona and another million in Madrid, hundreds of thousands in Valencia, Bilbo, Sevilla, Granada, Málaga, Gasteiz, A Coruña, Gijón, Valladolid, and many more. A sea of people, many holding posters and energetically chanting, made it almost impossible to walk through the streets.
At least six million workers across different sectors went on strike. Similar to last year, men organized a network of “points of care” for children and the elderly, offering the infrastructure to facilitate women going on strike. These strikes show the power of working people as a whole. By shutting down the economy for a day, Spanish workers demonstrated that they also have the power to run the economy free from austerity and the attacks of the bosses.

One of the biggest growths of this year’s International Women’s Day (IWD) was in rural areas and smaller cities. In Almeria, for example, the agrarian organization COAG and the Confederation of Women in the rural areas estimates that 80% of farmer and rancher women struck.

The day of protests was organized by the 8M Commission (for March 8) a coalition of more than a hundred different organizations. There was an average of 250 feminists participating in the commission and there were more than 600 meetings that the 8M Commission held across the country. Over 200 shop stewards’ committees also joined the coalition and played a crucial role demanding more support from the main trade unions. While both Unión General de Trabajadores (UGT, General Union of Workers) and Comisiones Obreras (CCOO, Workers Commissions) only called for a two-hour strike, this year they offered support for the locals that wanted to call for the full 24-hour strike. Going further, in the education sector – one in which women are the majority of the workforce – CCOO called for the full 24-hour strike and achieved a stunning success: 80% participation in universities, 61% in high schools and 42.4% in pre-schools. Despite this progressive step, more involvement is needed from the main trade unions to stop the advancement of the right-wing, particularly as we go to elections in April and May.

For the second year in a row, IWD in Spain has been a day of struggle, demonstrating that the engine for real change in society are working people organized collectively to fight back. The oppression of women cannot be resolved on the basis of capitalism, a system that needs divisions to function.

As Izquierda Revolucionaria put it “we must build a feminism that is separate from the shows of the system, that they cannot assimilate or domesticate: a revolutionary, anticapitalist and class feminism.”