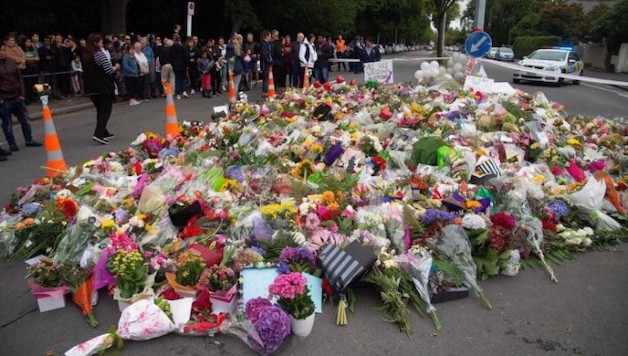 Reposted from thesocialist.org.au, website of the Socialist Party (CWI in Australia)

On March 15 a brutal terror attack was carried out on two mosques in the city of Christchurch, New Zealand. 50 people were killed with dozens more wounded. Already thousands of people have attended solidarity events and vigils in sympathy with the victims. These acts of standing together against racism and terror show the best side of human solidarity.

Understandably, many people are still trying to understand how someone could adopt such vile, racist views and how it was that no one seemed to notice that the perpetrator was preparing an act of mass murder. But some of the details of what motivated the attack are beginning to emerge.

We already know that the perpetrator, Brenton Tarrant, was born in Australia and holds far-right, racist views. He wrote a manifesto promoting genocidal violence, including against Muslims.

While far-right internet forums and chat groups likely acted as fertilizer for his hate, the ground has been prepared, for years, by the political establishment and the corporate media.

Right-wing racist rhetoric against Muslims has spiked in recent times, but the demonizing of Muslims is not new. Ever since September 2001, ordinary Muslims have been ruthlessly scapegoated by the corporate media and right-wing politicians.

And not just by the likes of senator Fraser Anning, who responded to the attack with an appalling victim blaming statement, suggesting that Muslim immigration bred violence. Or Pauline Hanson, who likened Islam to a disease which white Australia needed to be vaccinated against.

Both major parties in Australia have also used racism and Islamophobia to garner votes and to divide working class people to justify spending cuts, wars and anti-democratic laws.

Scott Morrison has been a pioneer when it comes to using racism as a political tool. He and Peter Dutton both claimed that the Australian government couldn’t provide health care for refugees without taking it away from Australian citizens. Let’s not forget that Morrison popularized the phrase “stop the boats”, and in 2011 he urged the shadow cabinet to use concerns about “Muslim immigration” to solicit votes.

The Labor Party are no better. They have matched the Coalition on almost every racist refugee policy and even one-upped them on a few. They implemented the ‘Pacific solution’ and excised mainland Australia from the migration zone. They have supported imperialist wars in the Middle East and so-called ‘anti-terror’ laws designed to demonize Muslims.

Even in New Zealand, Jacinda Ardern’s Labour Party is in coalition with the right-wing populist New Zealand First party. They have repeatedly called for an end to immigration from Muslim countries, essentially echoing many of the points made by Tarrant, not to mention U.S. president Trump.

Ardern’s statements against racism, and her immediate willingness to call this what it is – a terrorist attack – have been rightly applauded. But her party has a far from clean record when it comes to harbouring bigots and promoting divisive racist ideas.

As far as the mainstream press is concerned, in 2017 the Murdoch press carried over 2500 articles that had a negative attitude towards Islam. While the Christchurch terrorists’ views are abhorrent, they were built on what passes for mainstream commentary in Australia, New Zealand and much of the world.

With all that in mind, Scott Morrison’s condemnation of Fraser Anning’s statements are utter hypocrisy. History will not look kindly at the politicians and media moguls who profited, in votes or paper sales, from peddling racism.

We cannot rely on the current batch of establishment politicians to help us move forward after this tragic attack. They all support the system that breeds this hate.

Those that own and control the wealth under capitalism are a minority who do everything to keep the majority divided in order to maintain their rule. Racism and Islamophobia are just some of the tools they use, along with sexism and homophobia.

Alongside mourning this horrific attack, we must reject all these divisive ideas. We must strive to build movements of ordinary people that stand in solidarity with oppressed groups, as well as movements that challenge those that benefit from inequality and division.

The best way to undermine racist terror attacks is to undermine the system that breeds racism. We need to struggle for democratic socialist change, where the majority has ownership and control of the wealth in society, and where we can finally end all exploitation and oppression.