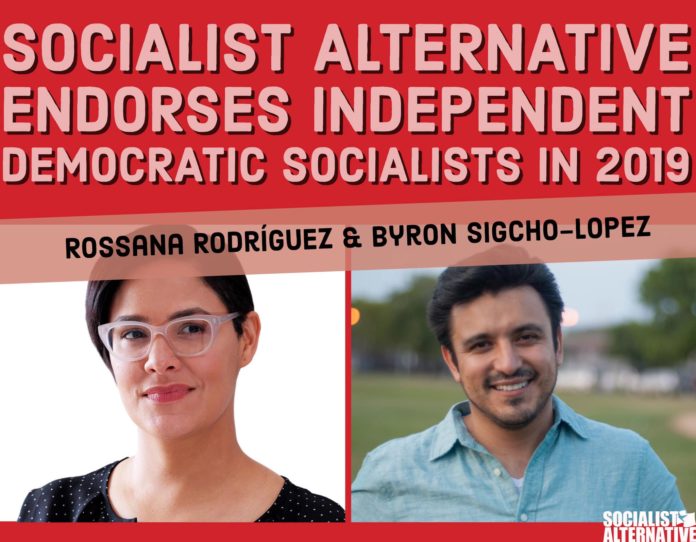 After widely disliked incumbent Rahm Emanuel dropped out of the Chicago mayoral race last September, the city’s Democratic establishment hoped to use the 2019 city elections to revitalize the image of its pro-corporate politics. Throughout his tenure, Emanuel implemented a number of vicious attacks on working people – most notably the closure of fifty schools. His pro-business agenda, while it brought a construction and tourist boom fuelled with funds taken from schools and other services, created massive backlashes against the status quo in Chicago, particularly the Black Lives Matter movement that brought the call #RahmResign to national attention in 2015.

The mayoral race is now hotly contested with a runoff election in April all but assured. This is a rare occurrence in Chicago where for decades, with just a few exceptions, the city’s Democratic “machine” has produced a consensus, pro-corporate mayoral candidate. At first, the crowded field wasn’t a huge hurdle for big business. Plenty of candidates entered the race who voiced the need to “turn the page” from Emanuel, but could ultimately be relied upon to broadly continue his policies. But the establishment’s attempt at a reset has been turned upside down by a wave of corruption revelations, which have been tied to every major mayoral candidate, a state supreme court justice, and two powerful aldermen.

The corruption scandals stem from an FBI investigation involving aldermen Ed Burke and Danny Solis, announced with a November raid on Burke’s office. The reports are outrageous – Burke was caught crudely shaking down a Burger King franchise and Solis received sex acts and Viagra in exchange for political favors – and have generated a mood of disgust and lack of enthusiasm for the election. Solis wore a wire for years and fear has set in among politicians that their own corrupt acts will be exposed on tape. Though many people are disengaged, the revelations have put the corporate establishment on the defensive as the methods it has used to rig the system in favor of big business have been called into question.

This, together with the deep anger and fightback generated during Emanuel’s tenure and the general shift to the left among big sections of society seen nationally, means that any new mayor will enter office in a weakened position compared to their pro-business predecessors. This is an enormous opportunity for working people to make gains against Chicago’s wretched status quo. As under Emanuel, mass movements in the streets will be the decisive tool for demanding bold improvements to our lives. Chicago’s workers and youth need to build a political revolution against the Democratic Party machine and a new independent party to fight for our interests!

Point the Movement to the Streets, Not Towards a “Seat at the Table”

The 2019 elections in themselves represented an opportunity to strike a blow against the Democratic establishment. Unfortunately the groundwork was not laid for a left mayoral candidate standing on a clear pro-working class program and pointing towards building a mass movement, and the opportunity will in large part be missed. Although there are 14 mayoral candidates, none represent a genuine break from the status quo. In the past few weeks the race has narrowed to a tightly-packed, low-polling group of establishment Democrats. Cook County Board President Toni Preckwinkle holds a slim lead.

Preckwinkle has portrayed herself as the “most progressive candidate in the race”. The Chicago Teachers Union (CTU), Democratic Socialist of America (DSA) member alderman Carlos Ramirez-Rosa, and other major unions have backed Preckwinkle and encouraged working people to support her in order to earn a “seat at the table” where she can supposedly be won to bold demands. In reality, Preckwinkle is a clear-cut member of the pro-business establishment. Although she has attached herself to some progressive measures, and big business is leery of her union backing, her long career demonstrates that her allegiances do not lie with working people.

As Cook County Board President, she implemented devastating cuts on hospitals and regressive tax increases, including the notorious “soda tax”, which was repealed due to mass opposition. She also signed Chicago’s bid for Amazon’s “HQ2” that promised to shower billions on one of the richest companies in the world.

In addition, Preckwinkle holds a powerful position as Chair of the Cook County Democratic Party. Although she has not always walked in lockstep with the machine, she gained her position by operating well within its rules. Last year she took $116,000 in political donations raised at the home of Ed Burke, which she later returned under pressure. But it was also revealed that she had given Burke’s son a $100,000 a year job with the County. Beyond simple political favors, her allegiances have had devastating consequences for working people. In last year’s elections, she backed Cook County property tax assessor Joe Berrios against a self-described reform candidate, even after Berrios had been exposed as having systematically overtaxed working-class and poor people, especially people of color, in order to subsidize property tax breaks for big business and developers.

Preckwinkle herself admits that she is not ready to stand with working people in all our fights. In response to attacks on her union ties made during a TV debate, she bragged about her record of cuts to county budgets and union jobs. And when asked if she would be able to say “no” to the CTU’s demands, she responded: “Of course. Of course.” If a more traditionally pro-business candidate like Bill Daley, the son and brother of two former Mayors Daley, or Susana Mendoza, a Burke protege, is elected it will be in large part because so many have been unconvinced and even put off by Preckwinkle’s attempt at a “progressive” rebranding.

The CTU leadership and alderman Rosa have contributed to challenging the status quo over the past period – the two recent victorious CTU charter teachers’ strikes stand out. Had they used the years since the limited campaign of Chuy Garcia in the 2015 mayoral race to prepare the ground for a genuinely left, working-class campaign, the opening existed to deliver an enormous blow to the corporate establishment in the 2019 elections. Going back to 2014 and the excitement for a possible run by CTU President Karen Lewis – who was tragically sidelined by cancer – there has been a growing space for a working class alternative to the corporate Democratic establishment in Chicago elections. Yet, no systematic preparations were made and the unfortunate approach of CTU leaders, Rosa, and other major union leaders has been to cheerlead for Preckwinkle despite her record.

The “seat at the table” strategy does not account for the inevitability under capitalism that big business will attempt to undermine any attempt to pass serious reforms. As working people we derive our power from our numbers in the streets and in our workplaces, not by sitting down to tables inevitably stacked with corporate politicians and business representatives. It’s crucial that we prepare our movements and workplace struggles in Chicago to fight based on this strength, refusing to limit ourselves to what more friendly-sounding establishment politicians like Toni Preckwinkle are willing to offer.

Despite the dampened mood around the elections, a desire for change could be registered in the city council races. For decades, Chicago’s city council has operated as pro-corporate rubber stamp for the mayor. A number of left union-backed and self-described socialist candidates are running for city council – some as Democrats and others independent – making some good demands. The defeat of their corporate opponents would be a positive development. Depending on the result, a radically new situation could emerge on the council that could make the body more open to pressure from below and put it more frequently in conflict with a big-business mayor.

Socialist Alternative endorses Byron Sigcho Lopez in the 25th ward and Rossana Rodriguez in the 33rd ward. Their campaigns are independent, take no corporate money, and they themselves are activists and members of the DSA. Their efforts point in the direction of what’s needed: independent working class politics that will fight for bold demands like a $15 minimum wage now, an elected civilian police review board, rent control now, and taxing the rich and LaSalle Street futures trading to fund education and services.

However, Sigcho and Rodriguez will face a number of key tests if they make it into the runoffs, and especially if they’re elected to office. To win their demands, they will have to do more than just hold a seat on city council; they will have to build serious struggles in the streets. With just one seat on Seattle’s city council, Socialist Alternative’s Kshama Sawant has played a key role in building struggles like the fight for $15 and the Tax Amazon campaign. This was only possible by using her city council office as a battering ram for movements from below.

It will be crucial that Sigcho and Rodriguez base themselves on fighting movements in order to beat back the fierce attacks that big business and the Democratic establishment will inevitably unleash against them. Sigcho, for example, is running in a ward where a 62-acre “megadevelopment” called The 78 is planned. The developers behind The 78 will pour massive amounts of money and energy into defeating a campaign or alderman that refuses to cooperate. One developer-friendly opponent has already accused Sigcho’s campaign of ballot theft, which the campaign has publicly refuted. In order to successfully stand up to big business it will be necessary to go on the offensive with struggle in the streets.

If they are elected, we encourage Sigcho and Rodriguez to follow Sawant’s example by accepting only the average wage of a worker in their wards, in order to demonstrate their accountability to movements. They should also use their positions to push for a new, independent, working-class party in the city, which would represent a breakthrough for working-class struggles.

At times the campaigns have focused on the candidates’ personal stories as people connected to the community at the expense of key demands around which to build movements, and their profile as socialist and independent is not always clear. More boldly putting forward demands and the need for independent movements could draw people towards the campaigns and prepare them for the battles to come. Socialist Alternative will be ready to fight side-by-side in the struggle going forward.

The results of the mayoral mayoral elections are extremely uncertain at the moment, and the runoff will likely introduce a new dynamic. However, despite the weakening of the Chicago establishment, big business will end up with a mayor that they can work with. It could even be an extremely business-friendly candidate like Daley, which would shock and potentially demoralize many who saw an opportunity for serious change after Emanuel’s exit. Nevertheless, following the election it will be crucial to recognize that, whoever wins, the underlying balance of forces are shifting favorably towards working people. Left forces should look to avoid repeating the mistakes that allowed for the missed opportunities of this year’s elections. Our movements need to quickly assess the new situation and seek opportunities to unite and push a common point of attack to win big gains.