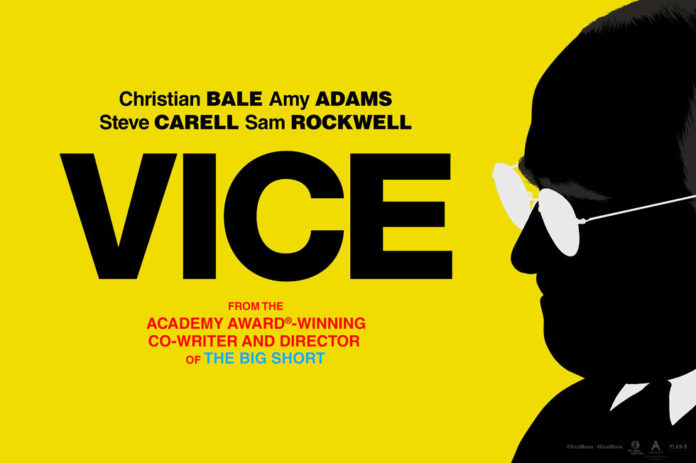 The release of the recent movie VICE is an attempt at capturing the real inner workings of the White House during the George W. Bush Administration. That administration was one of the most secretive, deceptive, and manipulative the United States has ever seen. While it focuses on former Vice President Dick Cheney, the movie is also about more than just one man. It’s about the ruthlessness of a section of the American political elites in protecting and fighting for the endless profits of big business at the expense of people’s lives all over the world. Contrary to the mixed reviews of this film, all people upset at the state of the world and the power that President Trump holds should watch it!

As the movie progresses, the pattern becomes very clear by the end. You start to realize that massive cons perpetrated by Cheney and others in Washington to start the wars in Iraq and Afghanistan, the prison of Guantanamo Bay, the Patriot Act – all of it helped set the stage for a new era in U.S. politics that brings us to now.

Today Trump fills his cabinet with billionaires and rips up environmental and other regulations that check profits while pretending to defend the working class. Cheney practically wrote the book on how to use government as the tool of the most rapacious and parasitic sections of the ruling class – oil companies, military contractors and the banks – without any democratic oversight by pushing for greater and greater concentration of power in the executive branch.

Cheney was a part of a movement in the Republican Party in the ’70s and ’80s that sought to reassert U.S. military and economic power across the globe in the wake of the anti-Vietnam War movement. The difference between Cheney and corporate politicians before him was his allegiance to the most brutal and short-sighted sections of capital: fossil fuel companies, military contractors, and the big banks that backed them. Screwing over the same people he claimed to be protecting – regular working Americans – was just part of the deal. His rise to power came from his total loyalty toward assuring bigger profits for big oil and defense companies. He did it without a speck of concern for those it would hurt.

During the movie, as each member of the Bush administration showed up, it was like being haunted by the most awful people you forgot you hated. I had forgotten the arrogance and total lack of empathy that existed with these people. Donald Rumsfeld, Paul Wolfowitz, Scooter Libby, and Anthony Scalia just to name a few. They would justify and rationalize all their actions as long as it was “for the good of America.” In Cheney’s view it wasn’t about what would be good for working people or the poor, but what would make the most profits for American corporations and CEOs. Cheney and his cohort never had a speck of concern for those it would hurt.

In Bush II’s presidency, the neo-conservatives were hell bent on restructuring the Middle East in the interest of maintaining control of oil reserves and reasserting U.S. power on the global stage. In a cabinet meeting it was Cheney, not Bush, that ordered Colin Powell to lie to the united nations about Iraq having an extensive terrorist network, a connection with the September 11 attacks, and an arsenal of weapons of mass destruction. The movie portrays Powell as though he was against the war. On the contrary, he was against the pace of the invasion and not the invasion itself. The American public and the world was straight up lied to by the Bush administration. Their decisions were made without the input or knowledge of the public, without oversight, and with total disregard about how decisions would impact regular people. But that is what concentration of power looks like. That’s how Cheney operated and sought to acquire more and more power.

The September 11, 2001 attacks sent shock waves through the U.S. In the movie Cheney was depicted as calm and collected as the towers came crashing down. Vice explains that he immediately saw the opportunity of a lifetime, where everyone else saw a crisis.

While the process of concentration of power in the Executive Branch has been ongoing for decades, Cheney and Bush seized the opportunity that 9/11 presented to pass the PATRIOT Act, drastically curtail civil liberties, and start a war for oil, all of this supported by Democratic votes. It could have otherwise taken them years to undo the regulations and civil liberties that had been won by working people.

According to MSN Money, Halliburton’s KBR, Inc. division bilked government agencies to the tune of $17.2 billion in Iraq war-related revenue from 2003-2006 alone. This money financed the construction and maintenance of military bases, oil field repairs, and various infrastructure rebuilding projects across a country ripped apart by the war. This conflict of interest was a regular feature that showed up a few times in the movie. When questioned by two generals, about no bid contracts, both Cheney and Rumsfeld’s response was simply that they weren’t concerned. Why would they be? This type of free flow of profit making and lack of government intervention was exactly his vision.

Not to mention the thousands of working-class men and women that went to war believing they were protecting their family from the evil of terrorism. Instead they were sent to die to pay for another yacht, a third home, or a few new cars for oil executives. Hundreds of thousands of Iraqi men, women and children have died. Countless others have been displaced and lives ruined. The cycle has only continued and gotten worse as this had led to ongoing sectarian violence and the rise of ISIS. The lies and false links to terrorism that led to the Iraq war are now actually coming true and it’s because of U.S. foreign policy. As someone that was only 16 years old when September 11 happened some of the details and issues the movie raises I had forgotten about or never even realized. Especially for young people, VICE is worth seeing as it provides a glimpse into how we got into the political mess we find ourselves in today.

Where the Hell Was the Democratic Party?

What was only slightly touched on was the role the Democratic party played in the political arena during that time. At one point when the movie flashed over to an image of Obama, one person in the crowd in the theater where I saw the film cheered while everyone else was still sitting in silent scorn. Most Congressional Democrats including Hilary Clinton (depicted in the movie) agreed to war funding and the attacks on civil liberties. At the end of the day, the Democratic establishment also serves the interests of corporate America, including their endless wars.

The Democratic Party, despite at times trying to depict itself as an antiwar party, has only served to demobilize, discredit, and dismantle antiwar movements. While President Obama wound up the war in Iraq (before starting another one), by the end of his administration “the U.S. dropped an average of 72 bombs every day — the equivalent of three an hour.” During the Bush years, the Democratic Party signed off to continue funding the war efforts and at the same time offered zero ways out of it. Guantanamo Bay detention camp the torture chamber of the U.S. remained open under Obama even with his promise to close it.

He Got Away with It

VICE is a reminder of the savage impact Cheney and the entire Bush administration had on our political system, civil rights, and the world. By nature, capitalism then gives out metals, rewards, and lots of cash for people like him. The real drawback to seeing VICE is that it leaves you feeling as though justice is never going to prevail, evil old white dudes will forever run the show, and what can we do about this.

One spot of hope not mentioned by the movie was that the downfall of Cheney and Rumsfeld’s power came due to the mission in Iraq not going to plan as well as the massive pressure exerted by the antiwar movement. Cheney recently said Trump “sounded like a liberal” after he criticized the invasion of Iraq during his campaign. Cheney is a bionic man now; but his ideas and actions can be stopped. In 2019, many more people are seeing the need to fight not just against Trump but all those like him. Working people are getting tired of those in power that put profits before people. If you want to know what a real weapon of mass destruction looks like go and see VICE. If you want to know more about how to fight back, take the next step and check out Socialist Alternative.