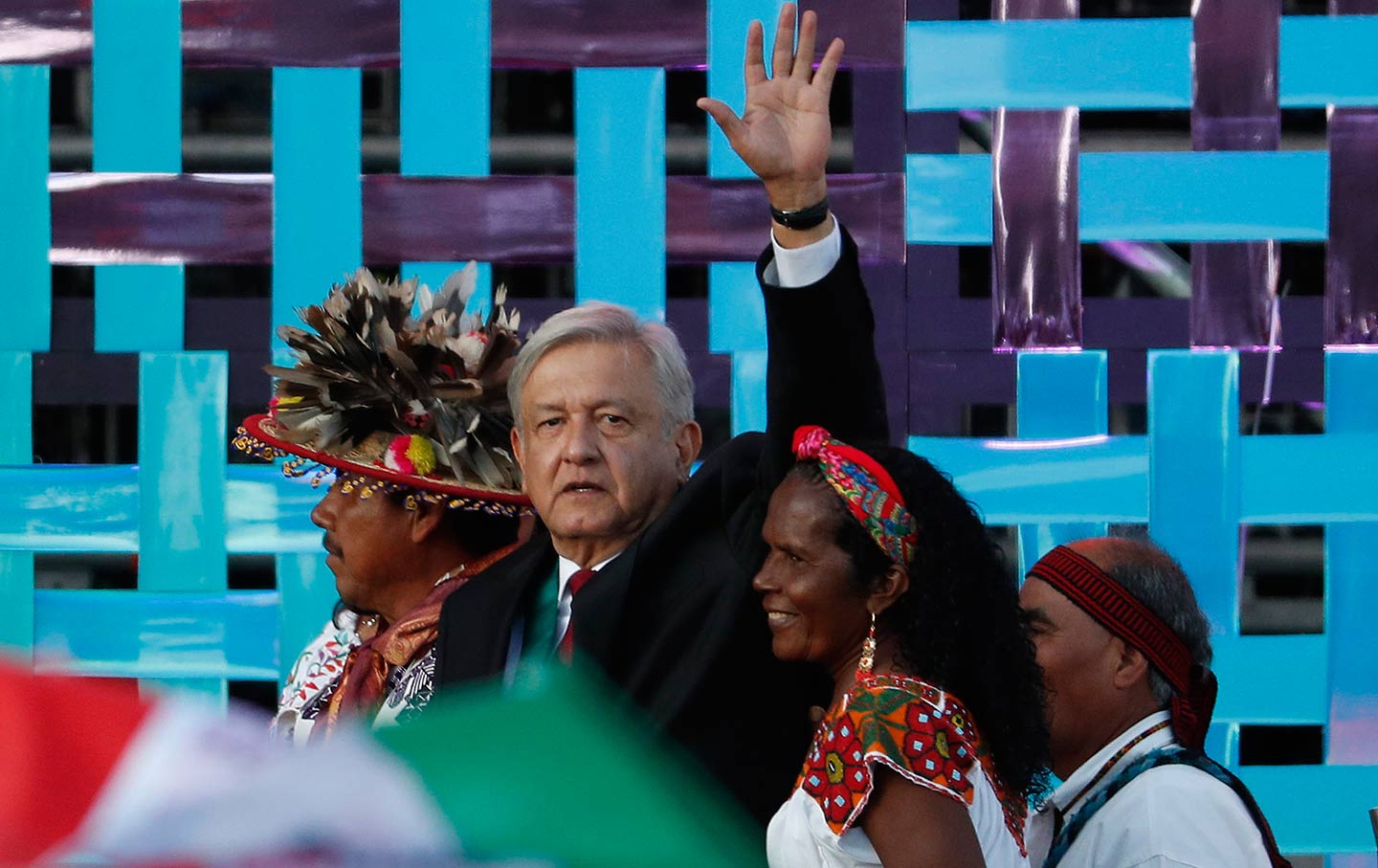 On December 1, Mexico’s new president Andrés Manuel López Obrador, popularly known as AMLO, was sworn in to office. AMLO’s presidency marks the beginning of a new period in Mexican history. After over eight decades of betrayals of the Mexican people at the hands of the two establishment political parties, the Institutional Revolutionary Party (PRI) and National Action Party (PAN), a left alternative has emerged. AMLO and Morena ran his campaign on promises of a dramatic transformation of Mexico, including eliminating corruption, reducing violence, fixing infrastructure, and providing resources for the poor.

The triumph of AMLO signifies the desire for change of millions of Mexicans. AMLO took 53% of the vote in last July’s elections, the highest percentage for any president in Mexican history. His party, a new formation called Morena, won a majority in both houses of congress and gained control of numerous state-level offices. This development in Mexico shines as a light of hope in the midst of the current ascendency of right-wing governments in countries like Brazil and Argentina, showing that Latin America is still standing and has the power to fight back against reactionary regimes and longstanding corruption.

This win was not born out of AMLO’s sheer will and determination or even his progressive program. Rather, an opportunity for him to rise to power was opened up by the defeat of the establishment parties by the hands of mass movements. The 71-year long consecutive rule of the dominant PRI party, from 1929 to 2000, and the subsequent string of PRI and PAN governments brought with it military and police violence, the privatization of key sectors of the Mexican economy, reactionary labor and education reforms, and above all, corruption. AMLO’s predecessor, the former PRI President Enrique Peña Nieto, began the process of privatizing Mexico’s oil industry. This resulted in a 20% increase in fuel prices and was met with huge protests. Peña Nieto was also implicated in all of Mexico’s big scandals of recent years, which created bigger and bigger social movements in response. These reached their height after the disappearance of 43 students from the Ayotzinapa Rural Teacher’s College in 2014, causing an outrage that still sees a manifestation in most protests to this day.

Another key mobilization of recent years has been against the construction of the proposed new international airport. Rather than providing a necessity for Mexicans, the new airport was a corruption-filled mega-project funded by taxpayer money to line the pockets of the ultra-rich like Carlos Slim, the richest person in Mexico. In a country where most of the population cannot afford to fly, the proposed airport was more of a plaything for the rich than an answer to average people’s needs. The people of Atenco, the site of the proposed airport’s construction, have been struggling against the airport since 2000, and recently united many people around their cause with a campaign #YoPrefieroElLago, or “I Prefer the Lake,” making the case that building the airport at the site of Lake Texcoco would spell environmental destruction. This fight put the issue of the airport’s construction in the center of the past election cycle, such that every candidate had to engage with it, with AMLO taking a stance against the airport as one of his central campaign promises.

Currently AMLO is trying to do a balancing act of keeping both the capitalists and workers happy, but there’s no space for that in today’s crisis-riddled economy: the 1% won’t cede anything. This has resulted in AMLO’s positions shifting toward the right in the face of pressures from big business. For example, he has said that he’s not planning to re-nationalize sectors like oil. During his campaign he promised to pull the military off of the streets, but has since gone back on this stance. And significantly, AMLO decided not to take advantage of his electoral win to bring down the airport construction project in Atenco, instead calling a referendum on the issue.

But with this referendum on the airport, AMLO opened up a fundamental debate: who makes the decisions in society? The referendum gave people the opportunity to make the decision about a mega-project, and to pressure the government directly. Normally the Mexican government and capitalist class make these sorts of decisions without input from ordinary people, but here we see that the fight back of the anti-airport activists provided a counterforce to the rightward slide of AMLO’s government, maintaining pressure and causing him to hesitate in pushing through the plans for the new airport. When given the opportunity to decide on the airport’s construction for themselves, the people rejected it with a resounding “no.”

The struggle against the unpopular new airport demonstrates that when working people organize and fight, we win. An important lesson to draw from this struggle is that the movement can push forward its own demands with its own forces to win political victories, without resigning itself to working within AMLO’s government and taking whatever concessions the government allows.

Now the task for the Mexican working class is to continue pushing forward, and building movements to take advantage of this historic moment. Mexico now has a progressive government, but it must continue to fight for a workers government built upon true democracy. Without a clear break from the capitalist system, AMLO’s government will continue to succumb to the pressures of big business. We must build a movement that can hold AMLO to his word. Any reforms in the interests of working people will be fought tooth and nail by the capitalists, with no gains ever being truly safe under capitalism. In order to truly secure better lives for Mexican people, and the working class worldwide, a socialist transformation of society is necessary.