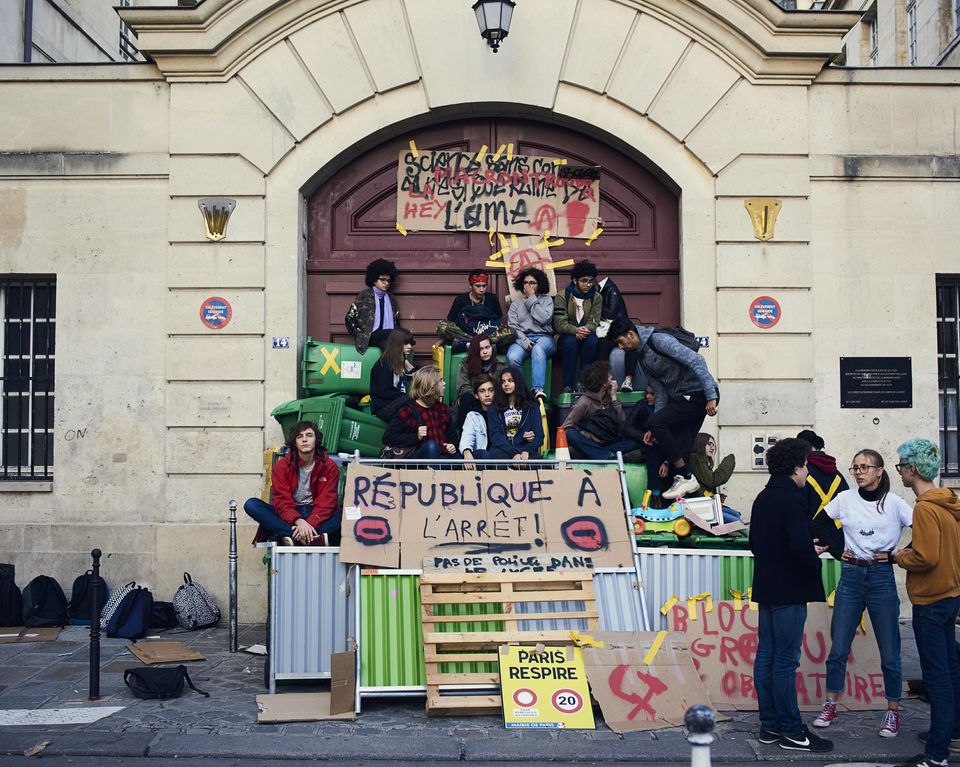 The following is a leaflet Gauche Revoltionnaire (CWI in France) produced to engage with the #GiletsJaune or Yellow Vests protests. Read more analysis here.

Limoges, Dijon, Paris, Rouen, Marseille… thousands of high school students have taken to the streets to join the revolt [watch the police oppression against them here]. It won’t end anytime soon! We can’t accept a society in which young people have no future.

The Parcoursup university admissions system which allowed universities to reject students for the first time in French history: thousands of young people were denied access to university because of it. Jean-Michel Blanquer, the minister of education, got rid of upwards of 2,650 positions at middle and high schools, even as the number of students increases! As if less teachers allows for better education!

He also aims to destroy the Baccalaureat Pro, the secondary education program focused on vocational training, by the reduction of dozens of hours of courses going into 2019. A cut-rate Bac Pro, this is what our government thinks of education!

The reformation of the Baccalaureat, also guarantees us a more unequal high school system, with better options only available in rich districts. The rest of our schools will fall apart with less resources and bigger class sizes. Macron wants to make education available only to the elite, we call for high-quality and truly free education for all!

The Revolt Must Spread!

The hike in gas taxes served as the spark for the Yellow Jacket movement. The huge oil companies pollute, raise their prices, and the government forces more taxes out of us. Meanwhile, taxes on the rich (like the wealth tax) are cut. Huge corporations like Total make their billions in profit without paying taxes.

Millions of people have had enough of this president and his politics of the rich, which is using the environment as an excuse for taking money from working people. At the same time that housing aid has dropped, taxes on retirees have risen. These poor and working people finance the gifts of the rich while the schools, the nurseries, and daycares close up!

Working People and Youth: For a United Fightback!

Macron is entirely for the capitalists, the bankers, and big business. The rage we see comes from workers, retirees, and young people who can’t bear more of this society where the rich get richer and the poor get poorer, forced to work harder for meager pay. It’s our future that is in question. Macron is afraid of a mass fight, of the youth uniting with the workers. This is the direction we must take. Let’s form general assemblies to discuss, to convince more and more young people to join the fight and build toward a huge strike together. Beginning on Friday, December 10, strikes will begin everywhere!

Enough of this unjust society! Enough of exploitation, of pollution, of racism and of sexism. It’s capitalism that fosters all of these, and we must get rid of it! For a truly democratic society, guaranteeing free quality education, and a future for all young people: for socialism! Join us!