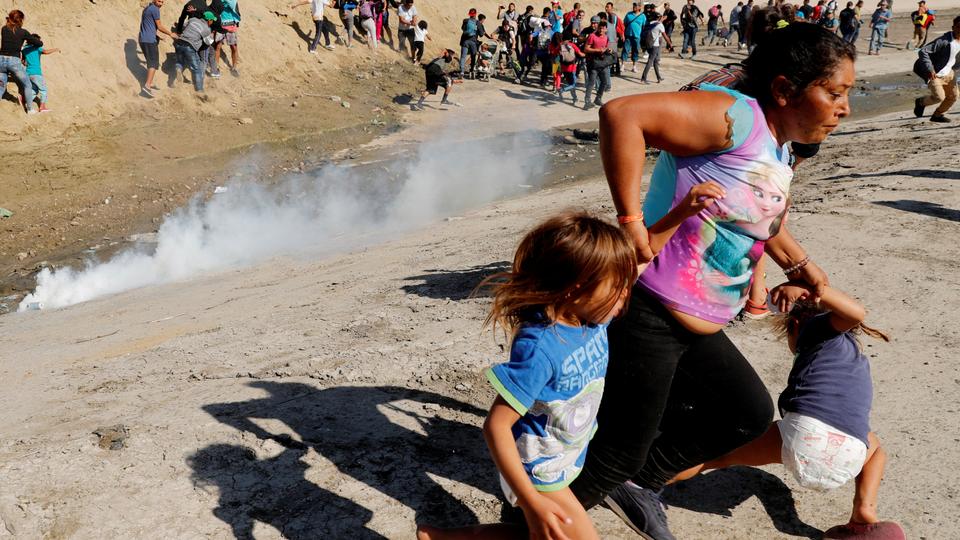 A caravan of thousands of migrants has amassed in Tijuana at the U.S.-Mexico border near San Diego. Migrants seeking asylum from violence in their native countries of Honduras, Guatemala, and El Salvador, they traveled for weeks just to reach the border. Upon arriving, they have been greeted with a militarized border and tear gas. The caravan has been painted by the Trump Administration as a George Soros-funded invasion by terrorists and gangsters. However, workers must see this tragic display for what it truly is: an indictment of global capitalism.

In the lead up to the midterm elections, Trump hastily ordered 5,800 troops to the U.S.-Mexico border.  We should view this for what it was: a crass and craven election maneuver designed to fire up Trump’s voting base. Underlining this cynical maneuver, Trump nearly completely stopped talking about the caravan following election day, as some sections of the establishment media pointed out.

Meanwhile, the troops have been busy installing barbed wire while practicing war game scenarios against a caravan of elderly people, children, and exhausted parents. Echoing his ally, Israeli Prime Minister Benjamin Netanyahu, Trump said: “If they throw rocks, our military will respond. I told [the national guard officers] to consider [the rocks] a rifle.” Adding to the tension, anti-immigrant groups with violent histories, like the Minutemen, are now at the border as well, spurred on by Trump’s vile and hateful rhetoric.

Asylum is a process to get residency in another country because it is not safe for you to stay in your home country due to persecution or other reasons. In order to claim asylum in the U.S., you must already be in the U.S. Thus, denying entry to people is one of the right wing’s tactics to prevent migrants from receiving asylum. One of Trump’s first moves was to deny asylum to anyone who enters the country outside of a port of entry, creating a new barrier to application. In effect, Trump is trying to end the application of an internationally recognized human right (even if often violated in practice) on the southern border. Of course this “asylum ban” would be challenged in court but even if a federal judge overturns it we cannot rely on the Supreme Court to defend the right to asylum.

Migrants began reaching the border on November 20. Trump ordered that only 100 asylum seekers a day could be processed. This has led to massive delays and increased tension, culminating in the use of tear gas and rubber bullets by U.S. troops on defenseless migrants. Surely, a handful of rocks will not bring down the most powerful military on earth. As with all things Trump, this current immigration crisis has been sensationalized, but it is not unique: not the caravans, nor the economic forces coercing the displacement of thousands of people, nor the political class’ response to it. Nor is it just in the U.S.: the new Italian government in which a far-right party plays a key role is refusing to allow any migrant ships from North Africa to land. In Hungary, the right-wing government has built a border fence to prevent any migrants from “Muslim countries” entering.

In recent years there has been a growth in open xenophobia, actively promoted by the right and especially Trump himself. Historically, xenophobia has been whipped up by sections of the ruling class to exploit the fear and economic insecurity of sections of the working class. The vast majority of U.S. workers face an economy that lacks living-wage jobs, offers increasingly low wage, non-union jobs, and strips them of vital social services.

The anti-immigrant narrative sounds like this: immigrants are either coming to take jobs from U.S. workers or to engage in criminal activity. The new twist in the post-9/11 era is the misinformation that jihadist terrorists are penetrating the southern border while hiding among asylum seekers. But migrants have not created the economic conditions that leave so many U.S. workers jobless, impoverished, and deeply anxious – it’s big business and the capitalist economic system that does that. Immigrants are simply reacting to similar, often more dire, economic conditions in their own country.

Meanwhile, the ruling class once again benefits from sowing artificial division amongst the working class. Manipulating poor economic conditions at home and abroad, the ruling class engages in a balancing act that seeks to acquire a steady flow of a super-exploitable immigrant labor while also holding the threat of deportation over these workers in order to enforce their second class status. In the past corporate America has supported “immigration reform” as long as it maintains second class status for most of the currently “undocumented.”

The leadership of the Democratic Party presents itself as opposed to Trump’s bigotry and attacks on immigrants. They have opposed the building of the wall and the separation of families; some leading Democrats have gone further and supported the call to “abolish ICE.” But time and again they have caved in at the decisive moment as over the question of the DACA program which protects Dreamer immigrants. And of course the Obama administration deported more people than all other previous administrations combined! At this stage the Democrats appear to have no coherent policy on immigration at all.

U.S. immigration policy is a humanitarian disaster. It is anti-worker and increasingly aggressive in its brutality. ICE is currently holding 44,000 detainees. Recent court filings show that there are still 171 children separated from their families and detained in U.S. custody more than four months after a judge ordered the Trump administration to reunite all families separated at the U.S.-Mexico border.

But at a deeper level the whole “crisis” on the Southern border is manufactured. A New York Times headline earlier this year says it all: “Border Crossings Have Been Declining for Years, Despite Claims of a ‘Crisis of Illegal Immigration’” (6/20/18). The biggest source of immigration into the U.S. today is from Asia.

Why Did The Caravan Develop?

All of the Trump administration’s moves have been backed by a steady propaganda campaign that attempts to paint desperate migrants as an invading army of terrorists and gangsters.

However, there are real people and important issues at stake. The caravan migrants are people seeking asylum while fleeing grinding poverty and the violent disintegration of society.

This is a sampling of what migrants have faced on their journey from Central America: extortion by police; extortion by organized gangs; state violence by Mexican military at the Guatemala-Mexico border; dangerous river crossings with infants, children, and elderly; constant hunger, dehydration, and exhaustion. Historically, migrating solo has been an even more perilous experience for workers, especially women who are targeted for assault and rape. It should be noted that caravans of migrants are not a new phenomenon. Because of the dangers of travelling through Mexico, migrants find it safer and less expensive to travel north in groups rather than hiring a “coyote” to assist in the migration. The whole reason the current caravan was created in the first place was for safety in numbers, not to invade the United States.

U.S. foreign policy, particularly brutal in Central America, has led to particularly brutal regimes and areas where drug cartels effectively rule. This is the result of the “war on drugs” policies pursued by successive U.S. administrations. Hundreds of thousands flee the violence and instability. U.S. taxpayer dollars were also used to finance the School of the Americas in Fort Benning, Georgia, wherein military officers from several Latin American countries were trained in counter-insurgency and torture.

A recent example is Honduras where Barack Obama and Hillary Clinton (when she was Secretary of State) supported the 2009 Honduran military coup of President Zelaya, a left populist who passed mild land and labor reforms. After sham elections supported by the Obama administration, several activists from the National Popular Resistance Front and several journalists were disappeared, recalling the deeply repressive history of the region. Most notably in 2016, environmental and indigenous leader Berta Caceres was assassinated after years of struggle against inequality, environmental degradation, and the power of multinational companies centered around the Agua Zarca hydroelectric dam.

Economically, successive multinational trade agreements like the Central American Free Trade Agreement (CAFTA) have led to increased inequality and desperate poverty. These agreements assure the status of a tiny ruling elite who oversee the permanent underdevelopment of their respective countries while the U.S. exploits their raw materials and cheap labor. The people of Central America need regional cooperation based on working-class solidarity, not on the profits of multinational corporations. Such a socialist confederation of the Americas would mean a massive shift of resources that would enormously benefit the poorest countries and regions and allow people to live a safe life with decent jobs in their home countries.

Fellow workers, let us be clear: The migrants are workers seeking asylum from repressive governments and in desperate search of work so that they can safely provide for themselves and their families. They are not terrorists. They are not gangsters or freeloaders. They are workers. Our sisters and brothers, our nieces and nephews. Innocents bound up in a guilty system. A system guilty of exploitation, deprivation, and desperation. Guilty of callous neglect or murderous oppression.

Capital does not recognize national borders. It flows freely across borders in search of profits, leaving misery and destruction in its wake. The powerful forces compelling these migrants, these economic refugees and asylum seekers, are produced by capitalism. The chaos of the global market and the imperialist lust for profit displace millions of workers and poor around the globe.

The only way to guarantee a rise in the standard of living for any workers is to demand rights and gains for all workers. Additionally, unions must take an active and vocal lead on the immigration issue, rejecting and arguing against anti-immigrant ideas.

The migrant caravan we have been witnessing is not theater of the absurd. It is cinema verite in its rawest, unyielding form. It is an indictment of capitalism and imperialism in real time. A shattered mirror calling all workers to solidarity. The latest revelation of humanity’s ultimate choice: barbarism or socialism.