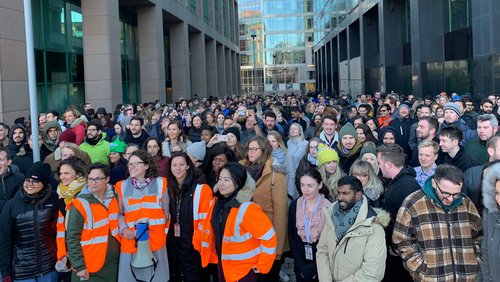 #MeToo has hit the tech world as hundreds, possibly thousands, of Google employees, led by women, are organizing a historic walkout from work on November 1 at 11:10 AM. Spurred by a October 25 New York Times article highlighting that Google “systemically allowed senior executives accused of sexual misconduct to leave the company with massive severance packages,” employees began organizing an action to let the Google executives know that this behavior will not be tolerated and to demand structural changes to end discrimination and harassment of women workers.

Employees started organizing this past Monday after the NY Times story ran. As of Wednesday morning, 1,500 employees had joined an email group to discuss demands and organize the walkout. Flyers for the the walkout have been posted at offices across the country and even internationally. While posting flyers around one office, coworkers who have never spoken to each other before began talking to help divide the work and get as many posters up as quickly as possible. Employees began excitedly messaging each other about the developments, spreading the news and encouraging each other to join the walk-out on Thursday.

By noon, it was the only topic of conversation.

Workers began changing their profile pictures to support the walk out, drafting auto response communications to send in response to any emails received during the walkout and discussing how to continue fighting for the demands after the walkout. One employee changed the default desktop background for thousands of machines across the company to include messaging about the walkout. Another posted it to the front page of the corporate intranet for the entire company to see.

All of this was done without “asking permission” or checking in with management. There clearly is an underlying mood to fight back, and to organize independently of management. This event has provided an outlet for that energy. Local leaders have stepped up to organize the walkout at 31 offices, around the globe and more are joining all the time. Zurich, Toronto, Sydney, London, Dublin, Munich, Tokyo are just some of the international offices participating. In the U.S., walkouts will be held across the nation in New York City, San Francisco, Chicago, Mountain View, LA, Seattle, Boulder, Pittsburgh, and many more.

The employees have come together around a set of demands that will be presented to Google’s executives. They are demanding an end to forced arbitration on complaints, a transparent process for reporting sexual misconduct, the right for every employee to bring a third party representative of their choosing when filing a harassment claim, and for management to release pay data broken down by gender and ethnicity. Not only are Google workers taking aim at sexual harassment in the workplace, but they’re pointing toward equal pay for equal work and an end to the gender, and racial, pay gap.

An international employee walkout to fight sexual harassment at the world’s most well known tech company highlights the growth of the global women’s movement against sexual abuse that the #MeToo campaign has galvanized. Google workers are following McDonald’s workers’ who walked out in 10 cities on September 18 to force the company to seriously address sexual harassment in the workplace.

We are witnessing some of the first concrete steps toward workplace self-organization among tech employees. The tech billionaires will want to put an end to this incredible movement by throwing some crumbs its way, but the critical issue is for Google’s workers to remain organized, united around common demands. This movement has already begun to widen its demands, and has from the beginning attempted to unite direct employees and contractors. The likely next step will be workers making economic demands. For Google workers to succeed, they will need to form a permanent organization, independent of management, to democratically shape this developing movement, as previous generations of workers did when they unionized their new industries.