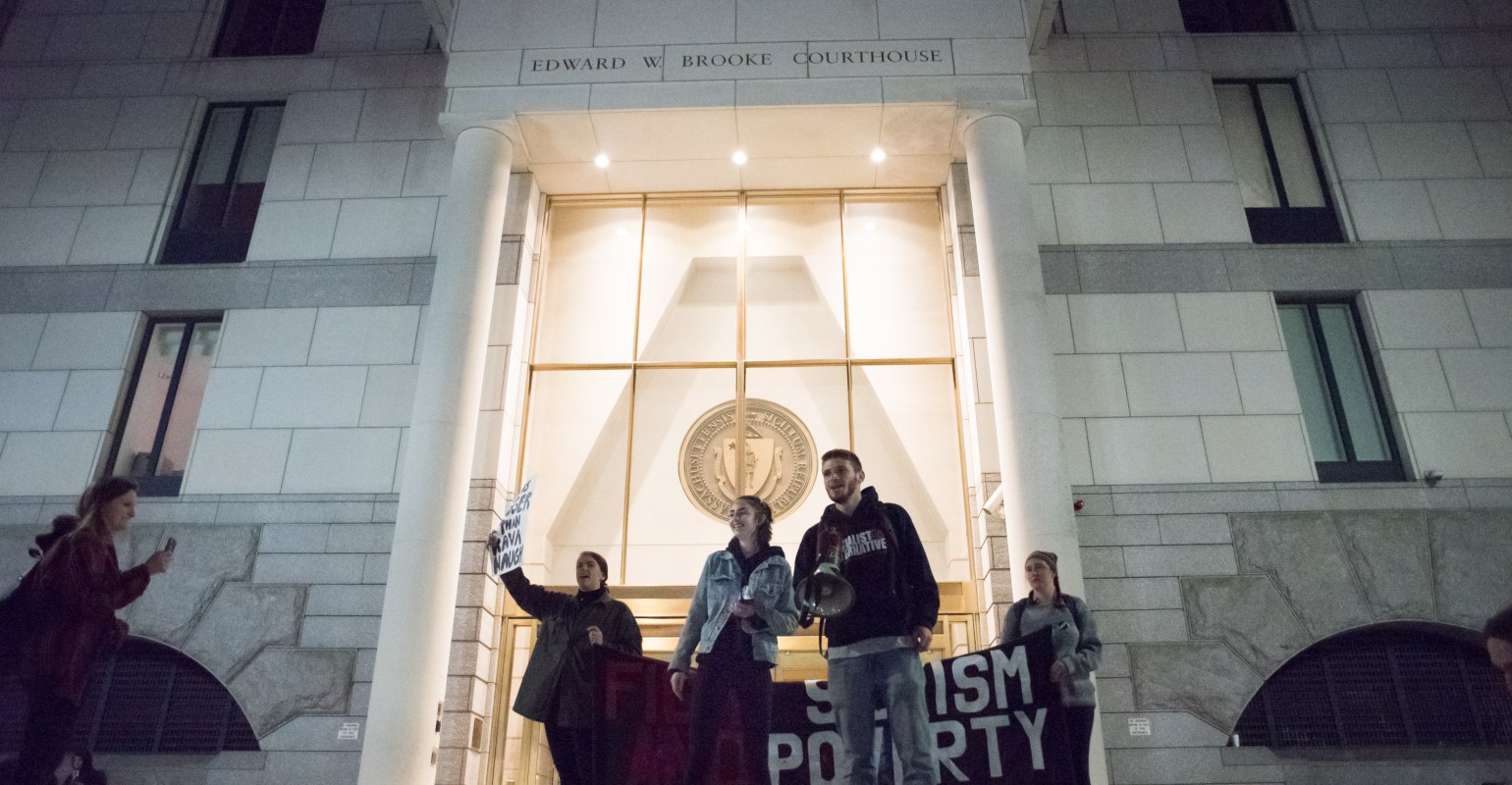 “Hi my name is Mari Sitner. I’m a student at Emerson College and a member of Boston Socialist Alternative. I’d like to end this protest by acknowledging a few people. I want to thank all of the sexual assault survivors who were brave enough to speak out and add to an ever growing movement of women who are standing up against injustice. I’d particularly like to thank, Julie Swetnik, Deborah Ramirez, and Christine Blasey Ford for risking their own safety to ignite the fight against Brett Kavanaugh. Words can’t do justice to how these three women have affected this country. Without these allegations another rich, privileged, pro-corporate, man would have flown through his Senate hearing virtually unopposed. I would like to thank Anita Hill, who more than 20 years ago testified as a victim of sexual harassment at the hands of arch-conservative Supreme Court nominee Clarence Thomas. Looking at then and now you could hardly tell that anything has changed. In so many ways it hasn’t. And to everyone who came out today because they saw this event on facebook, online, or on the news, and wanted to stand up for what they believe in, you are the reason this is happening today. Our voices are more important than any politician in Washington. A mass movement of people who are fed up with the establishment, with the way that our society is being led, is the only way to make real change. As a socialist, I believe that we can achieve a society free of sexual assault, sexism, and all forms of oppression.

Many of the most powerful men in the nation have now been accused of sexual assault. It started in Hollywood taking down some of the most untouchable figures, now it’s sweeping it’s way through our government ripping apart both sides of the political establishment. It’s next stop is in the everyday lives of working women like the Marriott workers on strike just down the street and all over Boston and the McDonald’s workers who went on strike in multiple major cities against sexual harassment. As the movement grows we have to grow with it. If we want to see real change we have to take to the streets and show those in charge that this culture of woman hating will no longer be tolerated. The incredible courage of the women who have publicly spoken out against powerful men are a wake up call to us all that we must speak out, so that one day we can break the cycle of unpunished sexual abusers. The people have the power to stop the abuse, to stop the rape culture and stop the misogyny.

Right now I can’t help but be reminded of Brock Turner. The rich, white, rapist whose trial for sexually assaulting a woman behind a dumpster gained national attention. Brock Turner’s viscous assault won him a short six month sentence, he only served three of those months. Young men like Brock Turner grow into men like Brett Kavanaugh. It’s astounding and disgusting the sons of the white millionaires and billionaires can commit such crimes, while innocent black boys and men are shot and killed just for daring to exist while black. The difference between the way law enforcement treats black and white youth is staggering. It is emblematic of the way that the law operates in this country. It is a system built on racism, sexism, and all forms of inequality. This trial is living proof that we have a sickening culture of protecting rich boys and men at all costs. In elite prep schools and ivy league universities, as well as universities around the country, sexual abuse runs rampant. Ruling class men pass down the ability to assault, harass, and oppress women through the generations.

This entire trial has been a testament to how broken our system is. The problem is not individual abusers, though they deserve to be punished. The problem is the system built on oppression that lets men get away with heinous crimes against women. Individual men’s attitudes and actions are not what hold our society back. It is the fault of a system that needs inequality to survive. Voting in more women to Congress won’t change the fact that 1 in every 4 women have been sexually assaulted. More women CEOs won’t change the fact that many single mothers work multiple jobs and still can’t afford basic necessities. We need to move away from corporate big business feminism that seeks to raise up a few women and suppress the rest. We need to build a socialist feminist movement that fights for the rights of working class women, women of color, undocumented women, LGBT women, and disabled women. Under capitalism all women suffer, so all women must fight back so that our voices may be heard. We need to fight for a socialist society that guarantees universal childcare, free high quality healthcare for all, housing for all, access to education and the arts. We’re fighting against Kavanaugh today, but tomorrow we start the fight for a better world. We need to continue the #MeToo movement so that we can build a new system, with a new standard for how we treat women.

So now I’d like to take a moment to speak directly to all the senators who have already voted, or plan to vote for Kavanaugh. Many people here today think that what we need to do is appease you, to make you our ally. But what we must do now isn’t suck up. Our job as citizens is to make you, and all other lawmakers like you, afraid of what happens when you don’t represent us. It’s looking more and more like we’re going to have another predator in power but that doesn’t mean we will back down or give up. If you refuse to listen, we need to continue to demonstrate and disrupt. The Democratic Party has been missing in action when it comes to actually mobilizing women, students, and working class people, not only against Kavanaugh but against all structural injustices we face. If the Democrats want to truly resist Kavanaugh like they say they do and support women they will continue to call for action against the system that lifts up men in the billionaire class to positions of power, no matter how many women they have abused. We need to let our government know that we will not step down until our voices have been listened to and our ideas have been taken seriously. This movement has only grown since the protest on Monday, and it needs to continue to grow, even if Kavanaugh is appointed. Especially if Kavanaugh is appointed. Now isn’t the time to get complacent. Now is the time for mass action, now is the time for civil disobedience. Anyone who thinks that Kavanaugh getting appointed is us losing, and that this is the end is wrong. This is just the beginning.”