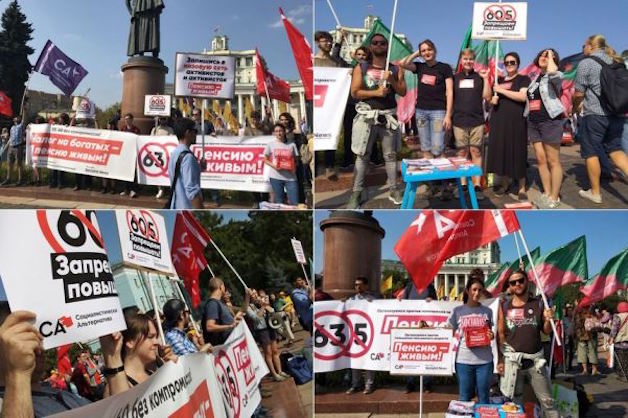 The day Russia unexpectedly won its first game in the football world cup tournament the government announced a major attack on the pension system. For some time, leading figures in the government have spoken about the need to increase the pension age, first established decades ago, from 55 years for women and 60 years for men. Immediately after his re-election in March, Putin too declared that one of the tasks of his term would be to increase the male retirement age to 63. But when the government announced its plans, they proposed that males would now retire at 67 and females at 63.

Anger was immediate. The small Confederation of Independent Trade Unions (KTR) launched a petition against the reform, which within days gathered over two million signatures. Such was the feeling that the official state trade union confederation and even a few isolated deputies from the ruling ‘United Russia’ party spoke out against the reforms. This did not, of course, prevent deputies from the trade union voting for the reform in the State Duma.

During the world cup, public protests were banned especially in the venue cities. Nevertheless, spontaneous protests spread across Russia. Now that September has come, new protests are being organised. Opinion polls indicate that 90% of the population are against the reforms and significant numbers say they are prepared to actively protest. Noticeably, since May, dissatisfaction with the government has grown from 27 to 48%, with 32 to 55% expressing dissatisfaction with the Prime Minister and 10 to 27% with Putin.

Notably many of those protesting are young. They chant “We will not live till our pension!” It is not just that youth are concerned about their future but in past years with the cutbacks in health care and already practically non-existent social welfare, they worry that the burden of caring for the elderly will be placed exclusively on their shoulders.

The government argue that there is no money for pensions because of demography changes. The government argue that when in the past there were three or four working people to support every pensioner now there are less than two. In itself, this is a spurious argument because pensions are funded mainly from money raised in the past. The real reason for the crisis is that the money accumulated during the Soviet Union was robbed during the restoration of capitalism. When the global financial crisis hit Russia in 2008 the government stopped paying its share of the pension fund to bail out the banks. To add insult to injury, the government claim that people now live longer. But the average life expectancy for males in Russia is about 70 years which is a good decade less than that in Western Europe.

If this reform goes through, Russian pensioners will have one of the highest retirement ages and lowest life expectancy rates in Europe. They will receive just 40% of previous earnings, when in most countries the elderly get over 60%. This is on top of the fact that average wages in Russia are amongst the lowest in Europe. In addition, business pays practically no tax and the single-rate 13% income tax means the rich pay almost nothing to help support the poorer in society.

The government undoubtedly thought that the world cup and then the summer would help to dissipate discontent. But this has proved not to be the case. It is for this reason that the Kremlin suddenly announced last week that Putin would address the nation. The main TV channels all cancelled their broadcasts for his 40 minute speech that many found more than disappointing. Repeating the arguments already heard, Putin declared that he “didn’t like” any of the possible reforms but announced he would “only increase” the pension age to 65 and 60. This was presented as a “softening” of the position, but is actually higher that the 63 years Putin proposed last May.

However, rather than dissipating the anger, his speech seems to have only increased it. Just one indication is that the visits to the ‘socialist.news’ website increase twenty fold in the two days after his broadcast, with people angrily looking about how to protest. Now polls show that the number of people prepared to participate in protests against the pension reform has grown in the past month from 37% to 53%!  A wave of further demonstrations spread across the country on Saturday.

Whilst working people are angry and prepared to mobilise against the pension reforms, the existing organisations who claim to lead the protests are doing all they can to derail them. Although the official “opposition” parties – the Communists and ‘Just Russia’ voted against the reforms in Parliament – these parties are incapable of mobilising. Rather than have a united demonstration against the attack on pensions, the communists declared that they would have a separate demonstration to build support for their candidate in next week’s City election. The independent trade unions formed a block with Just Russia, whose leader had just welcomed Putin’s proposals. In their speeches, Just Russia members blamed immigrants, the unemployed and those workers whose employers pay them wages in envelopes to avoid taxes. Most significantly, both parties attracted people to their protests by paying them.

This angered those genuine protestors who want to see a mass protest develop. It remains to be seen what the turnout will be on next Sunday’s protests organised by the well-known ‘liberal’ opposition figure, Alexei Navalnii. While last week’s protests were deemed legal, next weeks are declared illegal and Navalnii has been jailed for a month.

Socialist Alternative (CWI) organised actively against the reforms, arguing for a united campaign, controlled by elected action committees, to demand no increase in the pension age, for an end to cuts in health and welfare budgets, and for wages and pensions to be increased to a decent level. Pension funds should be state-financed and under the democratic control of elected committees and workers and pensioners. Extra finance should be raised by proper taxes on the bank, big business and the rich.

This should be linked to the struggle to fundamentally change society, to end the rule of the capitalist oligarchs and for a democratic socialist society that plans the economy to serve the needs of the masses.