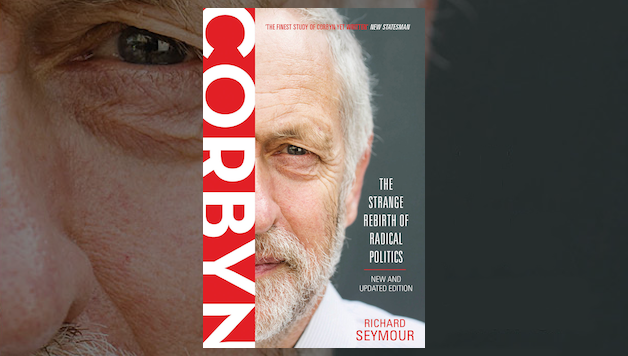 Originally published in Socialism Today, Issue 221 (September 2018), the political journal of the Socialist Party (sister party of Socialist Alternative in England and Wales).

People may read this book looking for both an explanation of Corbyn’s election and a strategy and programme to face up to the challenges he is confronted with from big business, their media, and their representatives in the Labour Party, the Blairites. Unfortunately, they will come away empty handed.

Seymour correctly identifies Corbyn’s victory as surprising the majority of the establishment. He points to the changes in the Labour Party’s electoral system brought in by the Collins review under Ed Miliband. These were rule changes aimed at further weakening the link between the trade unions and the Labour Party, and to place more power in the hands of MPs and the party machine. It was only the missteps of the Blairites – nominating Corbyn, believing his ideas were unpopular – that got him on the ballot paper, not the strength of an organised left within the party.

As the Socialist Party did at the time, Seymour points to the anger beneath the surface of British society against the austerity and austerity-lite policies offered by the Tories and Miliband’s Labour as the raw material for Corbyn’s popularity and subsequent victory. Seymour identifies himself as a Marxist academic. He is an ex-member of the Socialist Workers Party. But this book and the way it presents the question of class demonstrate an approach completely alien to Marxism.

The preface to the second edition, published after the 2017 general election, is mainly about how the establishment again failed to see how popular Corbyn’s programme was. Seymour takes aim at the polling companies for failing to reflect the support for Corbyn’s Labour, and at their simplistic view of class. The companies use ‘social grades’ which define class simplistically, based on whether you work in an office or have a manual job. Many people working in call centres, therefore, would be defined as middle class! Seymour correctly says this does not reflect the real world.

Yet he also looks at class, leadership, organisations and parties in a schematic and static way. For example, he says that historically the trade union leaders brought their “mediating character” into the Labour Party, reflecting their role in “negotiating between the demands of members and employers”. (p96) But this is a one-sided characterisation, disregarding the independent action of workers and their ability to fight and push the union tops into struggle or replace them with fighting leaders.

Seymour is similarly undialectical when he states, on the same page, “Labour had always been in favour of a collaboration between classes to secure reform rather than outright class conflict”. But who was in favour of collaboration, working-class members of the party or the pro-capitalist leaders at the top? When the predecessor of the Socialist Party, the Militant Tendency, was active in the Labour Party it was able to win broad support for a programme to fundamentally change society.

Workers joined what they saw then as ‘their party’ but were at odds with leaders acting to defend the capitalist system which exploits them. The actual struggle between workers at the base and the capitalist leadership does not feature in Seymour’s book. He sees the history of the Labour Party as one block, in which working-class people were always deflected away from actions which challenged the capitalist system.

For Seymour, therefore, New Labour was not a qualitatively new development, as there had been a pro-Liberal trend inherent within the Labour Party since its birth. It still “remained in some vital respects a very traditional social democratic party”, he argues. (p142)

He fails to see the effects of the collapse of Stalinism and the ideological boost to capitalism it represented, and which Tony Blair and others used to push through their measures to side-line the influence of workers and ordinary members in the party. The New Labour project claimed the party for capitalism, and it’s these capitalist representatives in the Parliamentary Labour Party and the local party machine who are diametrically opposed to Jeremy Corbyn now.

As the Socialist Party has consistently argued, for Corbyn to transform the Labour Party into one that can represent working-class and young people he must deal with these capitalist class representatives. Seymour describes how the Blairites centralised power and built up their positions in the party, but he does not provide any answers on how to re-found Labour.

Instead, there are questions: “What kind of party need it be? What needs to change?… How much compromise with the traditional party management is necessary?” (p248) Seymour states that the behaviour of MPs and councillors over the years has shown the necessity of change within the Labour Party but offers no guide for what is required.

A key task is to restore the weight of the working class within the party through the trade unions, but on a higher level than the past. Historically, the Labour link has been used by right wingers in the Labour Party to strengthen their position and attack the left – aided and abetted by right-wing trade union leaders. That is why a key part of our programme for re-founding Labour as a workers’ party is both extending and democratising the rights of trade unionists within it.

The consequences of Seymour’s lack of class understanding are revealed most sharply in his analysis of the tasks for a Corbyn-led government. In the final chapter, Seymour recognises that the lesson of the Syriza government in Greece is that “to take office is not necessarily to take power”. (p277)

He argues that “radical government finds it difficult to wield power precisely because… it is rapidly encircled by those who actually hold power and who are accustomed to exercising it”. (p277) That is, those representing the ruling class within the state whose role it is to defend the capitalist system: senior civil servants, army generals, central bank governors, among others.

Seymour’s answer to this sabotage is compromise. He sets the task of a Corbyn government as being to “administer capitalism while making it work for reform”. (p277) He sees this as combining the need to grow capitalism while taking away profits from the capitalists and giving a greater share to workers. Ironically, it is Seymour who is limiting the movement to “collaboration between classes rather than outright class conflict”!

From these mistaken ideas come what Seymour says are the immediate goals for Jeremy Corbyn: to “persuade businesses to invest, financial corporations to stay put… and to persuade them to accept that a price of [upgrading the productive base of the economy] is that workers will be paid more and will have more rights”. (p245) In reality, of course, the capitalist class is governed by what will offer short-term profits, combined with political considerations.

If the opportunities offered by a Corbyn government are not more profitable then they won’t invest. Moreover, the experience of the Syriza government shows that their actions will also be driven by a desire to punish workers in Britain for electing a Corbyn-led government and trying to break with austerity, to serve as an example across the world.

No amount of persuasion will be enough to actually implement an anti-austerity programme and to make real gains for the working class. Seymour himself admits that “Corbyn and McDonnell still face the problem that they cannot force business to invest”. (p283) To counter the sabotage, they would need to nationalise the banks and the companies making up the vast bulk of our economy, under democratic workers’ control. This is what is needed to be able to plan and run society on a socialist basis.