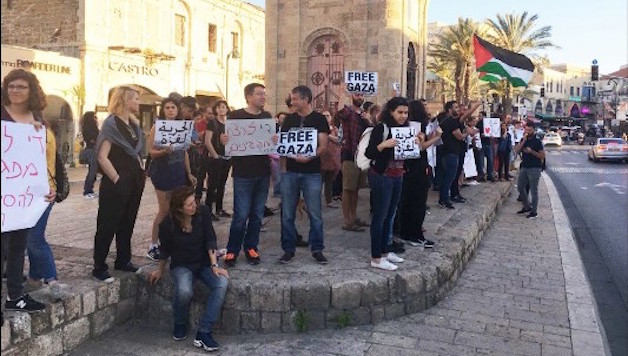 Around the world people have watched in horror at the unfolding violence perpetrated by the Israeli state against Palestinian protesters in Gaza. Sixty were killed on 14 May alone, during protests against the moving of the US embassy from Tel Aviv to Jerusalem.

As we go to press, more demonstrations are taking place on 15 May, marking the Palestinian Nakba (catastrophe) – the forcing out of over 750,000 Palestinians from their homes 70 years ago, when Israel was founded.

The moving of the US embassy is just one of many provocative moves by Trump in the Middle East, where tensions are escalating on various fronts.

Trump’s unilateral repudiation of the Iranian nuclear de-escalation deal has plunged the Middle East into a serious crisis. Like a pyromaniac, he has poured oil on an already inflamed situation with Syria and neighbouring countries already devastated by a war that has lasted longer than World War One.

In its wake, new multifaceted wars and conflicts have broken out. On top of this, the recent Israeli missile strikes on Iranian forces in Syria could be a harbinger of a new war, initially between Israel and Iran/Syria but possibly leading to a new generalised regional conflagration.

There could also be ‘blowback’ for Europe with a new wave of refugees seeking safety in Europe as well as further terrorist outrages, which could spill over into the US itself.

Trump claims that in ripping up the current agreement this will end the threat of Iran “ever acquiring nuclear weapons”. However, the outcome could be the exact opposite: the eventual acquisition of nuclear weapons by Iran and others, such as Saudi Arabia, in response to this.

The Guardian wrote: “Mr Trump’s invective relies on assertions that reinforce prejudices but have no basis in truth.” It completely refutes the claim that Iran was on the “cusp of acquiring the world’s most dangerous weapons”.

The deal did allow Iran to continue to enrich uranium but “it neither allowed nor [was it] technically able to use this process to produce weapons grade uranium”. Moreover, under the agreement Iran could not reprocess plutonium as an “alternative path to a nuclear explosive”. The Guardian concluded that the Trump speech was “estranged from the truth”; a polite way of saying it was a pack of lies.

This latest example of overbearing arrogance by Trump representing US imperialism was preceded by an even further shift towards the right in his government, with the inclusion of CIA Director Mike Pompeo as secretary of state and particularly the Cold War warrior John Bolton who served in George W Bush’s administration. A long-term neoconservative, he played a prominent and disastrous role in the invasion of Iraq. His proposal to bomb Tehran was even too much for Bush to contemplate!

In 2000 Bolton said, “If I were redoing the UN Security Council today, I’d have one permanent member (the US) because that’s the real reflection of the distribution of power in the world.” The US, through Bolton, is prepared to put the rest of the world on “rations” – as Trump’s economic trade war against rival powers show. This in turn threatens a generalised tit-for-tat and a world trade war. Moreover, the repercussions of military action can have further negative economic fallout.

The deranged Bolton’s foreign policy goes beyond even Trump’s ‘America first’ policy. It is a naked assertion of ‘American alone’, a return to US unilateralism that was undermined by the failure of previous wars in Afghanistan and Iraq.

The US met with ferocious mass resistance worldwide, which had an effect on some governments like Germany and France who were compelled to oppose the US. But Trump is prepared to ignore French president Macron, whose grovelling pleas in Washington went down like a lead balloon in France, with his ratings dropping. Chancellor Merkel in Germany, even Boris Johnson and the squeaks of ‘criticism’ emanating from Theresa May have all been pushed aside.

This is because Trump and Bolton’s ultimate aim is regime change in Tehran, not through military intervention, but savage sanctions which would bring in a new government.

Even the few military generals left in the Trump administration – like Defence Secretary General Mattis, who have been a ‘moderating influence’ on Trump – opposed this strategy which could have “unforeseen consequences” for the US.

They correctly believed that the nuclear agreement with Iran was working. They tried but failed to hold back Trump from feeding the inferno which he has already started.

Even before his latest outrage Trump had stoked up the rage of the Palestinians with the recognition of Jerusalem as the capital of Israel. Already at boiling point, their fury was then intensified, when according to Patrick Cockburn, “Israeli and American flags will flutter in the streets and there will be 150 giant billboards with the face of Mr Trump on them”. At the same time tens of thousands of Palestinians have sought to once more try and break through the fence surrounding Gaza, the “biggest open-air prison in the world”, with a large number of protesters killed by Israeli forces.

Trump and the neoconservatives that surround him may not score a quick and easy victory, as they imagine. Before his threats, the Islamic hardliners in Iran, and even the ‘reformist’ Rouhani government, faced a mass revolt, not least from the working class which has begun to reassert itself through strikes. There has also been continued open defiance on issues such as the refusal of women to compulsorily wear the hijab.

However, Trump’s actions are more likely in the short term to cement support for the status quo. This could push back for a time the movement for an immediate challenge to the Islamic regime through an independent movement of the working class and poor masses.

Even the intensification of sanctions – which undoubtedly would aggravate the already desperate economic conditions of the Iranian masses – would not automatically be blamed on the regime but the threat posed from outside.

The memory of its war with Iraq is seared into the memory of the Iranian people. British and US imperialism supported Saddam’s invasion of Iran, which resulted in terrible suffering on both sides. 300,000 Iranians were killed and countless maimed and injured.

No outside power will be capable of launching such an attack now. But it is possible that Israel – which has in the past bombed alleged nuclear sites in Iran – could at the behest of Trump and the US launch similar but more serious bombings on identified nuclear sites.

The Trump regime is threatening “devastating sanctions” against those such as the European powers who have said they will continue the treaty. There is no honour among thieves. Naked cash calculation – the amount of profit, loot, they can extract – along with their strategic interests is what matters and not the interests of the people of the region.

Look at the double dealing of Putin who had a cosy meeting, a friendly chat with Israeli prime minister Netanyahu in Moscow, while Israeli jets were bombing the military positions of his ‘allies’ Iran and President Assad’s Syria!

This demonstrates unequivocally that the working masses in the Middle East and elsewhere can only rely on their own forces, and their brothers and sisters worldwide, to show a way out of the nightmare in the region created by capitalism and imperialism.

They must organise and strengthen their own organisations, with class solutions to the problems of each country and the region as a whole.

The current elections in Iraq demonstrate that the masses are yearning for an end to sectarian-based parties, which have only served to compound the enormous problems created by capitalism and imperialism through the monstrous military interventions which have taken place.

The brutal assertion of US interests and the threat of economic retribution will intensify the inter-imperialist rivalry between the US and others, China for instance, which has a considerable amount of trade with Iran, particularly oil.

The US believes that its economic and particularly banking dominance will bring any opposition to heel. But that is unlikely in the short term because sanctions can take a long time to be effective. The US can face economic damage as those who are attacked take counter-measures.

The Iranian regime has declared that if the agreement remains intact they will continue support it. This is on condition that the original non-US signatories also stick by it.

Undoubtedly true to his word, Trump will attempt to impose “devastating sanctions” to those who continue to support and implement the deal.

No interference by outside powers: let the peoples of each country and the region decide their own fate, with the support and encouragement of the world working class and labour movement.

Additionally, the working class and the youth worldwide should raise their voices and prepare a new mass anti-war movement to help to thwart the arrogant and dictatorial actions of Trump, Saudi Arabia and Israel. He needs to be given a very hot reception in Britain when he visits in July. This can help to prepare a movement in the Middle East which, like a giant broom, can sweep all the capitalists and imperialists, the sheiks, princes and sectarian politicians from the stage of history.