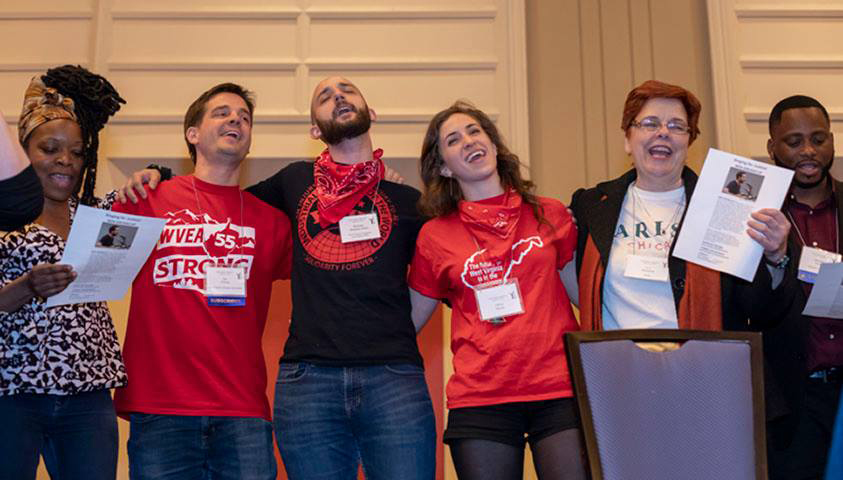 The spirit of the West Virginia teachers’ strike permeated the 3,000 plus attendance at the April 6-8 Labor Notes convention in Chicago. By organizing a strike, county by county, and winning in a right to work Republican run state – this struggle  has the potential to reinvigorate the entire labor movement. Returning to the adage of “an injury to one is an injury to all” and also the idea that union struggles are fights for the whole community – teachers in Arizona, Kentucky, and Oklahoma are now following this example.

Teachers from West Virginia were the stars of the show and spoke multiple times with hundreds of people hanging on their every word. Their struggle was provoked by the crisis in the public health care fund (PEIA). As they felt their power, it grew into a fight to raise their pitifully low wages. The massive teacher shortage, in part due to the low pay, helped by giving the teachers leverage – they couldn’t be replaced. The struggle also became a wider fight against low pay in the public sector as a whole and against the drastic underfunding of education. Like teachers in Kentucky, Oklahoma, and Kentucky, the teachers in West Virginia have taken a stand against the neo-liberal agenda of austerity and privatizing education pursued with particular savagery by the Republicans who run these states.

The teachers organized based on closed Facebook groups and decided early on that they would include all workers – union and non-union alike – in their effort. The massive momentum was further fuelled by the furious reaction to the arrogance of West Virginia Governor Jim Justice and the state legislature. While using the school structures of the union, the teachers were able to build a rank-and-file force that could defy the leadership and Democratic politicians when they tried to get them to stop short of their goal.

Teachers from Arizona and Kentucky were also present at Labor Notes and have taken up the community organizing tactics from West Virginia. Each state, however, has certain specific conditions. In Kentucky, the state legislature has already passed a budget full of cuts. In addition, Kentucky shares with West Virginia a lot of the traditions of working class solidarity  coming particularly from the mineworkers union with a strong memory of strikes and union activism. On the other hand, Arizona does not have the same union traditions which caused the teachers to ascribe huge significance to smaller confidence building steps, such as wearing red t-shirts. Teachers in both states described their struggles as moving in the same direction as West Virginia teachers and drawing huge inspiration from them.

What is Labor Notes?

Labor Notes brings together activists on the left of the trade unions every other year, and is also the name of a monthly newsletter. The state of the labor movement, the attacks on unions, working people, and social services are analyzed in a wide range of workshops and plenary discussions with speakers from  around the country – and internationally, thanks to visitors from Japan, Quebec, Norway, Mexico, Nigeria, and Britain. Union members ranging from Florida to Alaska, and Southern California to Maine, shared experiences, lessons, and tips on how to fight the bosses and win gains.

With 3,000 union members present from around the country, there was a huge potential to coordinate some sort of action coming out of this conference. This could have included organizing demonstrations against Janus, or getting resolutions passed by union locals in support of Oklahoma teachers. However, the opportunity was not realized by the Labor Notes organizers. The increased attendance shows that the seething anger among workers and the beginnings of a fightback combined with a generally weak labor leadership give Labor Notes a unique position in the labor movement. Unfortunately, the organizers of Labor Notes see their role largely in terms of providing a space for the opinions of the left of the labor movement rather than trying to give a lead. As Labor Notes’ profile grows, increased demands to use this conference to coordinate action will be posed from below.

Another weakness of the conference was the lack of discussion about the labor movement and elections. The 2018 midterm elections are seven short months away and  most unions will continue to give support to all Democrats in the general election while a number will also be supporting efforts to push the party to the left. Socialist Alternative sympathizes with the desire of tens of millions to drive the Republicans out and with those who want to turn the Democrats into a “People’s Party.” But we argue that unions and workers should run and support independent candidates as a step towards creating a new party based on the interests of working people. We do not believe it is possible to transform the big business dominated  Democratic Party which paved the way for Trump through cuts by bailing out Wall Street and not working people when it was in power.

Interestingly, these issues, while not raised by speakers or from the platforms, bubbled up in many workshops naturally as union members brought out lessons from their fights against local Democrats and the corporate control of the party apparent in the 2016 presidential election. We also have to point out that the struggles in West Virginia and the movement of students in Parkland, Florida won more in a few short months than the Democratic Party has delivered in years. We cannot wait until November, we have to push to make change now.

This willful blind eye toward electoral politics is not unusual for Labor Notes. However it was in striking contrast to the political consciousness of the teachers in struggle. In West Virginia, the teachers saw Democrats as unreliable allies and refused to accept any of their promises, insisting on staying on strike until the ink was dried on legislation. A teacher from Arizona, when talking about politicians visiting teachers’ town halls, remarked “Both Democrats and Republicans don’t understand what it’s like to be a teacher.” Yet, simultaneously, teachers expressed a strong “vote them out” mood directed against Trump and the GOP. There are now a number of Democratic candidates for statewide office in these states who are running on a pro-teacher, restore the cuts platform. Clearly they will benefit from taking this position but teachers’ own experience shows that even if the Democrats win back control of state houses on such promises there will have to be a movement from below to hold their feet to the fire. There are in reality sharpening contradictions within the Democrats which are pointing to the growing space for independent working class politics.

At the conference, Socialist Alternative focused on the upcoming Janus ruling which threatens right-to-work conditions for all public sector workers nationally. Over 30 members from around the country and all different occupations used a petition to argue that the recent victories by teachers showed that the pressure of a movement could have an effect against the worst aspects of Janus and right to work. While we got several hundred signatures, it is notable that the atmosphere was not one of worry and anxiety around Janus, but instead an acceptance that it would pass and a downplaying of the effect it would have. This is a mistake. Janus represents a significant threat. One only has to look to Wisconsin to see the damage that Scott Walker’s bills did to the public sector unions in that state. But the teachers revolt in right to work states also shows that Janus does not have to be a death sentence if the unions develop a fighting strategy.

In addition, Socialist Alternative brought a petition of solidarity with Seattle City Councilmember Kshama Sawant who is being sued by two cops for speaking out against the killing of an unarmed black man, Che Taylor. This petition was well received and immediately seen as an important step for protecting the right to dissent and fight against police violence.

The 2018 Labor Notes convention was the biggest in its nearly 40 year history and there was a hopefulness about the willingness of the working class to fight together – clearly driven on by the success of the West Virginia teachers. Everyone who attended got a greater sense of the challenges facing the labor movement nationally and learned lessons from struggles to take back to their union brothers and sisters.