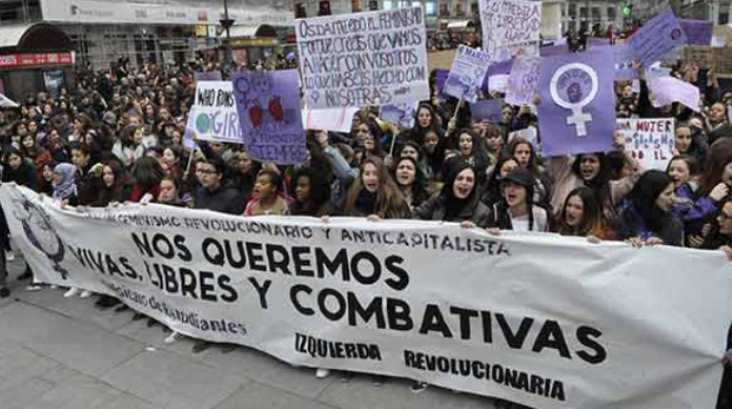 The feminist strike on March 8 was unprecedented. Never in the history of the class struggle in the Spanish state have such a deep and massive mobilization against the oppression of working-class women, against inequality and violence against women. Hundreds of marches took place from morning to evening and became a genuine Tsunami of millions in the streets. It reflected not only the anger of working class women and the youth with the capitalist crisis and reactionary PP government, but also the enormous discontent throughout society.

What we saw will not be easily forgotten. Firstly, because this movement was built from below, on the initiative of hundreds of women’s collectives, social movements and Left organisations, which worked for months to make this success happen. Secondly because the PP and Ciudadanos leaders viciously opposed the strike and marches, showing that their political agenda is a declaration of war in favor of institutionalized sexism and inequality. Thirdly, because the leaders of the biggest trade unions and of PSOE, who wanted a controlled, de-caffeinated day, have been completely overcome yet again. The strategy of social peace and demobilization was dealt a hard blow on March 8.

The images of the demonstrations speak for themselves. Despite the fact that the system’s media try to dilute the figures participating, the marches were far bigger than during previous general strikes. In Madrid we cannot accept the figure given by the “8M Commission.” No, there were not 500,000 people. We must compare it with the marches during previous general strikes. In Madrid, the demonstration could barely move with the avalanche of hundreds of thousands of women, young people and tens of thousands of male workers. In Madrid, there were more than one million people, covering more than 5 kilometers of road.

And Madrid was not an exception. The same happened in Barcelona, Vigo, Ferrol, Gijon, Bilbao, Gasteiz, Valencia, Malaga, Sevilla, Zaragoza, Tarragona, Cadiz, Toledo and dozens of other cities. It was a mobilisation which surpassed all expectations.

The Role of the Youth

Many media articles have underlined the massive role of the youth in this struggle, and it is true. The participation of millions of young women and men in this battle reflects the enormous revolutionary potential of the new feminist movement which is developing.

In this earthquake of the youth against violence against women and sexist capitalism, the Sindicato de Estudiantes (SE – Students Union) Libres y Combativas (socialist feminist platform launched by SE and IR) and the comrades of Izquierda Revolucionaria (IR – CWI in the Spanish state) have played a key role. Our call for a 24-hour student strike was massively supported. 90% of students in secondary schools and 80% of university students joined the strike. Thousands filled the streets in our student demonstrations in Madrid, Barcelona, Vigo, Ferrol, Gijón, Bilbao, Gasteiz, Donosti, Tarragona, Valencia, Sevilla, Málaga, Cádiz, Salamanca, Guadalajara etc etc, with more than 150,000 taking part.

On 8 March, the need for a revolutionary, anti-capitalist class-struggle feminism was clear. A movement which denounces capitalist patriarchy, but also the PP government, Ciudadanos, and all those who accept the logic of this system of cuts to rights, wages, health and education etc, of precariousness and sexist “justice” which protects those who abuse women.

From Izquierda Revolucionaria and Libres y Combativas we distinguish ourselves clearly from “transversal” feminism which the system incorporates. This armchair feminism of posing, allows our oppressors like Mariano Rajoy, to wear feminist purple without even blushing. On 8 March we made clear that all are not welcome in this struggle for liberation, and that women’s oppression is linked to class oppression. Not all women are our allies, and those of us who suffer violence, church control, precariousness, unemployment, etc have nothing in common with Angela Merkel, of other capitalist women. They defend the system and accept the sexist discrimination and violence against women which is part of the source of their privileges and power. They exploit us just like the capitalist men with whom they serve in power in cabinets, businesses and parliaments.

Organize the Struggle Until Victory! Down with the PP Government!

Working class women and youth were the main protagonists of March 8, in the strikes and demonstrations. Despite the CCOO and UGT bureaucracy only calling for a pathetic 2-hour strike per shift, which they didn’t even organize in most workplaces, only organizing symbolic gatherings, millions of women overcame fear and threats to go on strike. Women workers filled out the demonstrations, despite the fact that the media did not give them their due presence (giving dominance to actresses, journalists, and politicians spouting their “transversal” feminism). Working class women made 8 March a historic day.

This great feminist strike made clear that we don’t have to put up with this reactionary government for one more minute. Those who keep saying that there are no conditions for struggle, who lament an “unfavorable balance of forces,” what do they say now? Beneath the surface there is bubbling discontent and building pressure, in the homes and workplaces of the poorest and most oppressed in society. Among women, youth, and pensioners who have also begun an epic battle going over the heads of the parliamentary and union bureaucracy. All of this vitality, shown on 8 March, must continue in an organised fashion until the PP’s policies are defeated and Rajoy and co are removed from power. We must come together in a new general strike of all workers to end sexism and all cuts.

Izquierda Revolucionaria and Libres y Combativas calls on all workers and youth to continue the struggle for our present and our future, building a feminist movement which cannot be assimilated by the ruling class. A working class, revolutionary, anti-capitalist feminism. Build it with us!

• No to sexist “justice”! For just sentences against rapists and abusers of women! For the sacking and punishment of all police and judges who allow impunity for abusers;
• Drastic increase in economic assistance and shelter to victims of violence against women. For decent jobs or social welfare payments and decent housing for all victims of domestic violence and their children.

Our body our choice!

• For the right to free and safe abortions. Access to sex education and publicly funded family planning services in all schools and universities. Free contraception in health centers and pharmacies for all young people;
• Religion out of the classroom! No more sexist and homophobic messages in our schools! Repeal the LOMCE – the so-called law for the “improvement” of the quality of education!
• For an end to the multi-million euro woman-trafficking industry! Against prostitution, trafficking and paid surrogacy. Our bodies are not for sale!

• Repeal the labor reform. Decent wages for working class women. Exemplary punishments for workplaces which refuse to employ women, or who sack women for being pregnant or for not complying with dress and makeup codes;
• Exemplary punishments for workplace sexual harassment;
• For the right to 6 months maternity leave for both parents on full pay. Free public childcare in every neighborhood/workplace to allow parents to work;
• For public laundry, canteen and cleaning services to end the slavery of domestic work for women. Drastic increase in public spending for carers.

We don’t want to have to be brave when returning home, we want freedom.

• An end to the objectification of women’s bodies, which feeds into sexist violence Immediate withdrawal of all advertising which objectifies women’s bodies. Down with the promotion of sexist ideals of “beauty” which feed prejudices.