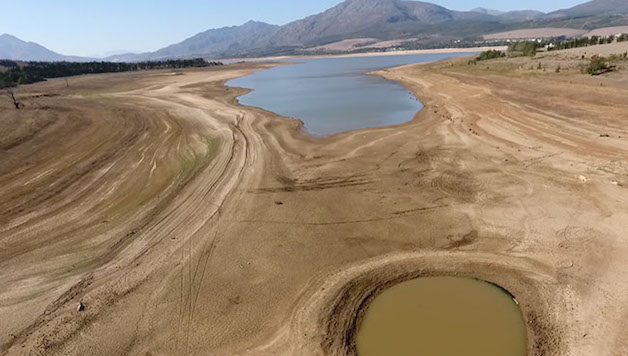 Cape Town is facing its worst drought in almost 100 years. Rainfall was at a 100 year low two years in a row, and the dams that supply 98% of Cape Town’s potable water are currently only 26% full. The biggest, Theewaterskloof Dam, is only at 13%. Once a dam is below 10%, it becomes very difficult to extract water. This is the reality Cape Town is faced with today.

The City of Cape Town has pushed the narrative that ‘Day Zero’ will happen, and the only way to avoid it, is to reduce individual water usage.  Day Zero is supposedly the day the taps will run dry, because there is no water left in the dams. Four million Capetonians will have to collect a 25 litre daily allocation of water from less than 200 water collection points. Schools, hospitals, and the CBD will not have their water turned off.

Despite this evidence of significant savings from residents, the government continues to fear monger with talks about Day Zero, unjustly scolding the people for not doing their share to save water. Blackmail tactics are being used to install water management devices, with false promises to fix leaks and write-off inflated water bills, limiting households to 200 litres of water per day. When leaks are not fixed, this allocation runs out within hours before automatic shut-off engages. This leaves the household with nothing until 4am the next day. Note that the allocation is calculated on the City’s clearly false assumption that an “average” household consists of four individuals – just another indictment on the City’s complete disconnect from the people it supposedly serves.

As far back as the 90s scientists have warned the City of Cape Town that a decline in rainfall and incline in population would lead to a water supply shortage. At the root of this crisis lies a lack of planning for alternative water supply and storage options, as well as negligence in maintaining existing municipal infrastructure that make up the water supply system. This ultimately indicates a failure by all levels of government to the people of Cape Town, but currently city, provincial, and national governments are too busy playing politics to engage in meaningful public consultation to explore rational, affordable, and sustainable solutions.

The one unifying factor amidst the petty squabbling of the career politicians is the beckoning of a lucrative desalination public-private partnership. Make no mistake, the only role of the public in these partnerships is to ensure the private sector can profit off the resources that constitutionally and ethically belong to the people. With projections from the City of Cape Town that one large scale plant will cost R14,9 billion to implement and R1,2 billion per year to run, it is clear that government is using the conditions of crisis to rush through a tender that will impact the people of Cape Town for generations. The only question seems to be, which party gets to award this lucrative tender?

Regardless of the environmental impact, massive energy requirement, and unaffordability of extracting fresh water from the sea, these plants take 2-3 years to build and therefore make for a terrible intervention in a drought. Immediate interventions – such as removing water-guzzling alien vegetation from the areas surrounding supply dams and their catchment areas; fixing all leaks on public and private property; updating and maintenance of infrastructure; extracting groundwater sustainably with artificial recharge; recycling wastewater; and harvesting the water of the Camissa springs currently flowing underneath the CBD through sewers and storm water drains into the ocean –  have the potential to not only increase our water supply in a matter of weeks, but provide many jobs and training opportunities for residents.

WASP has joined more than 70 organisations from various backgrounds in forming the Water Crisis Coalition (WCC). The main aim of the WCC is to reject the privatization of our water and the fear mongering of Day Zero, and explore sustainable and rational water management options. The WCC has grown in less than a month’s time to include several community committees. The coalition has successfully pressured AB InBev (formerly SABmiller) to open to the public 24/7 the spring they claim ‘heritage rights’ to, increase the access points of the spring, and provide paid security during the night. Currently the WCC is pushing for distribution of the spring water to communities that cannot access it.

On 28 January the WCC organized a protest against the mismanagement of our water by all tiers of government. Hundreds of concerned citizens participated in voicing their frustrations, community-specific struggles, and handing over the WCC memorandum to the Minister of Water and Sanitation. The Western Cape Premier and Cape Town Mayor chose to ignore the invitations extended to them by the coalition.

Efforts to meet with all tiers of government have proven a waste of time, with ministry officials for the National Department of Water and Sanitation indicating that “harmonizing relations” between the DA-led city and province and the ANC-led national government must happen before a public consultation process can occur. While government sits in boardrooms shifting blame and negotiating their slices of the desalination pie, it is clear that the WCC’s energy is better spent in continuing to organize communities, schools, and workplaces, and build a true mass movement against the rush to privatize our resource.