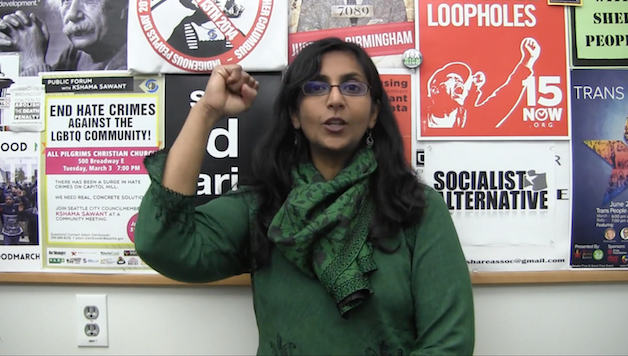 Originally a guest editorial in The Stranger.

As an elected representative of Seattle’s working people, a member of the American Federation of Teachers, and a socialist, I stand in solidarity with the struggle of the Seattle School District bus drivers for a decent contract.

The bus drivers, who are organized with the Teamsters 174, have engaged in months of fruitless negotiation with First Student, the company that the school district has contracted with for the bus service. Despite being a multinational corporations with significant annual profits, First Student exploits its workers, forcing them to work without basic benefits like healthcare or pensions. According to the Teamsters, fewer than 7% of the 400 bus drivers are covered by the company health plan. Refusing to accept substandard conditions, with an 85% vote to reject the latest contract, the drivers are preparing to go on strike.

School bus drivers perform a very important social function in our city, ensuring students are transported safely to and from their schools. These same drivers are being shortchanged by First Student.

As I said in a public letter last year, Superintendent Nyland and the School Board members bear responsibility for this situation, with their decision to use First Student’s privatized school bus service. It is no surprise that First Student, like other big businesses under capitalism, is consolidating wealth for its billionaire shareholders at the expense of its workers.

First Student has, shamefully but predictably, begun hiring part-time drivers. My appeal to the part-time drivers is, do not cross the picket line! The only way to defend good jobs and decent living standards is for all of us to stand united against exploitative practices by the bosses. I ask you to stand with us, union and non-union workers together, with the Teamster bus drivers. Corporations and the capitalist class rely on being able to divide workers, and force us into a race to the bottom. We must reject this despicable divide-and-conquer strategy.

The way forward for us all is to fight with the Teamster bus drivers to help them defeat First Student and win a decent contract, and build on that and similar victories.

I congratulate members of the Seattle Education Association (SEA), who have democratically decided, with a powerful 93% ratification, to engage in an afternoon walkout in solidarity with the bus drivers. I am appealing to everyone in the community to follow the inspiring example of the educators, and join them on the picket lines with the school bus drivers if they are forced to strike.

The recent experience of the SEA shows that when workers and unions fight, and all workers stand together, we can win. SEA educators went on strike in 2015, and won significant gains in their contract negotiations with the Seattle School District. At the time, Teamster drivers stood with the educators, refusing to cross the picket line to pick waste up or make deliveries as long as the educators were on strike. They understood, as do the educators, that an injury to one is an injury to all.

Experience across the country and globally shows that whenever public resources have been privatized, or put under so-called public-private partnerships, workers uniformly lose out. As we build strike actions for specific contract negotiations, we also need to build the power of workers to fight the privatization of education. We need full funding for all services related to public education by taxing big business and the wealthy, and closing corporate tax loopholes worth hundreds of millions of dollars annually. The Washington state legislature has been criminally negligent in its duty to fully fund public education. We, the working people of this city and state, need to build mass social movements to hold the Democrats and Republicans accountable, and fight against corporate domination over politics.

See you on the picket line!