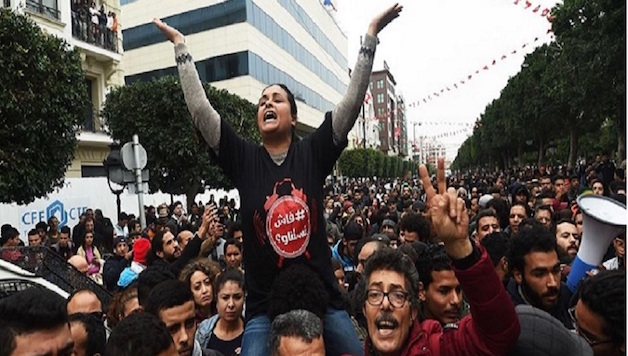 The explosion of protests that broke out this week against the new Finances Law (budget law) 2018, a battery of measures against the working and middle classes, has again put into perspectives the liberal commentators’ fairy tale about Tunisia’s “successful democratic transition”. In reality, the country remains an open battleground between the forces of revolution and counter-revolution.

For the last four days, social protests have erupted in numerous parts of the country, along with riots and violent street battles between young people and the police, especially in the marginalised inland regions and in working class suburbs of Tunis and other cities. Having initially responded to a campaign launched by social media activists (#Fech_Nestannew #فاش_نستناو = “What are we waiting for?”), people are venting their long-simmered rage against the worsening conditions of life.

The 2018 budget voted on December 9 includes a series of bitter pills to swallow for the poor, in particular the rise of the VAT which raises the prices of basic commodities such as medicine, fuel and food, the implementation of a new social security contribution, and new customs duties on imported products. Financial studies say Tunisian households will spend up to 300 dinars more on average every month as a result of these measures.

This huge assault on working class people has been concocted with tight supervision and applause from the International Monetary Fund, which is exerting intense pressure to speed-up the pace of so-called “structural reforms”, aimed at financing the repayment of the public debt to financial speculators. Contrary to a widespread myth, this debt has nothing to do with the “high volume of wages” of public sector workers, but is a poisoned gift from the mafia who was in power before the revolution. Tunisian people have never seen a penny of that money.

The State has replied to the movement with force, arresting hundreds of people, including the pre-emptive hunt for activists who issued statements or wrote slogans calling for the protests. On Monday night, a 43-year-old man died allegedly after having been run over by a police vehicle in the town of Tebourba, 30km west of the capital Tunis. It has not gone amiss that while the government methodically carries through severe austerity measures, the defence and interior ministries are greatly boosted up in the new budget, in a context of rising criminalisation of protests. The state of emergency, constantly renewed since November 2015, is used to clamp down on democratic rights, while last year the militarisation of certain production sites was decreed by the government in reaction to social movements in the south of the country. On all of this, Trump and other western imperialist leaders, prompt to hypocritically embrace the recent protests in Iran, have remained absolutely silent, as in this case it happens within their sphere of influence.

The grotesque wealth gap, at the heart of the revolutionary uprising against Ben Ali regime seven years ago, has only expanded since. Tunisia is pinpointed even by the corporate EU for being a “tax heaven” for the super-rich, while prices of basic staples, especially food, are breaking record, a phenomenon heightened by market speculation and by the organised dismantlement of the subsidy system by successive governments. The trade deficit has tripled in seven years, driving down the value of the Tunisian dinar, bringing up the cost of debt service payments and crushing the living standards of ordinary people. No wonder that in a recent poll, 73.3% think the economy is going “in the wrong direction”.

The situation in the poorer, inland regions is particularly inflammable, as local communities have seen no change or any meaningful public investment coming. Many young people have the feeling they bartered their blood in 2010-2011 for even more misery and unemployment. Any spark can lit the prairie fire, as shown by the example of Sejnane, a locality which has witnessed two general strikes in less than a month at the end of 2017, in protest at joblessness, poverty and the deterioration of public services. That movement was triggered by the self-immolation of a mother of five in front of the building of the local authorities, a tragic episode reminiscent of the spark of the so-called Arab Spring in December 2010.

Even according to World Bank figures, the middle class in Tunisia has been squeezed by half since 2011. In this alone is expressed the dilemma facing capitalism in Tunisia: the ruling class has been forced by the 2011 revolution to veneer itself with the appendages of a parliamentary democracy; yet, it does not have a stable economic base. The last six years have registered an average economic growth of less than 1%, hence the capitalists cannot afford to give away substantial concessions to workers and poor that could provide their remodelled political system with a sustainable social base of support.

Testimony to this reality, nine governments have succeeded each other in less than seven years since Ben Ali’s overthrow. All have teetered, sometimes fell, on the rock of people’s explosions from below. It will be no different with the current regime. The so-called “national unity” government of Youssef Chahed is composed of four parties, with the leading roles played by Nidaa Tounes (essentially a recycling machine derived from Ben Ali’s now dissolved RCD) and Ennahda (the right-wing Islamist party which ruled the country until 2013). Both are facing internal crisis and have suffered splits.

Nidaa Tounes is also the party of the President of the Republic Caid Essebsi, and is ruled by his own son Hafedh. The latter is the most hated figure in Tunisia, and the leader of Ennahda, Rached Ghannouchi, comes second on that list. Projections say around 70% people will abstain in the coming municipal elections. All this speaks volume about the unpopularity of the ruling establishment, heightened by a reshuffle which brought back individuals with direct ties to Ben Ali’s regime straight into the cabinet.

Last year, the government tried to cut across its growing discredit by starting a vocally promoted “anti-corruption campaign”. Corruption is even more widespread than it used to be under Ben Ali. Once tightly controlled and centralised by the ex-dictator’s inner circles, it has now flourished all over the place. The colossal corruption of the ruling elite was an important factor fuelling the revolution, and politicians are very much aware of this. This anti-corruption campaign has mostly consisted in a few high-profile arrests of corrupt figures involved in contraband and smuggling networks. But there is no public trust whatsoever in the government to tackle this issue seriously – certainly since the ruling parties themselves have been the architects of a misnamed “reconciliation law” in effect whitewashing state officials for corruption cases during Ben Ali’s era, which was passed in Parliament last September.

Disgracefully, the central leaders of the General Union of Tunisian Workers (UGTT) have exhibited a very cooperative attitude with the government on its austerity plans – although the recent movement forced them to take some rhetorical distances. All through 2017, the mainstream press has been full of praise for the general secretary Noureddine Taboubi, as his election at the head of the trade union federation has marked a turn towards more explicit forms of class collaboration. Having acted like “social advisers” of the current neo-liberal cabinet, having done nothing to prepare the struggle against the latter’s social war on the workers and poor, the central leaders of the UGTT bureau are now struggling to pretend to be on the side of the oppressed. Correctly, protesters did not wait for any signal from the union tops to pour onto the streets, or they would have waited forever.

The union leaders are raising eyebrows about the acts of violence and looting. Certainly such acts of vandalism need to be opposed; they play straight in the hands of the state, providing it with pretext to try and discredit the demands of the movement and to justify its clampdown on peaceful protesters. Agents provocateurs and looters need be isolated and marginalised by the movement. However, the responsibility for these developments also lies in the hands of these same trade union leaders. Many poor and alienated young people are indeed lured into the blind alley of desperate actions because these “leaders” have deserted their job, taking no serious initiative whatsoever to lead a determined battle against the intolerable social conditions experienced by the youth.

If these leaders are not ready to take serious action to broaden and strengthen the current movement, they should be replaced by people who are. The need to build a powerful strike movement against the Finances Law has to be firmly put on the agenda in every branch of the UGTT across the country. After all, it is the organised deployment of the power of the working class that sealed the fate of Ben Ali seven years ago – it is the same power that will defeat all those who try to carry on with the old regime’s economic policies.

The leaders of the left coalition ‘Popular Front’ are correct to call for stepping up the mobilisations. But their parallel call for “snap elections” falls short of what is required now. Of course, we are not in principle against elections that would see an early end to the mandate of the current administration. But launching such an idea in the height of the struggle betrays the Popular Front leaders’ habitual concerns to divert the outcome of grassroots social battles into the safe channels of institutional politics. Many have not forgotten that in 2013, these leaders squandered two marvellous revolutionary opportunities with a similar strategy.

In our view, a strong united front of struggle bringing together ‘Fech Nestannew’ campaigners, workers and trade unions, unemployed organisations and local communities, political and social activists, needs to be organised and escalated until the vile ‘Finances Law’ is scrapped, and along with it, its creator in the form of the Chahed government. But as amply demonstrated by the experience of the last seven years, unless the movement builds its own independent political expression based on the demands of the revolution, the capitalist ruling classes will continuously put together governmental teams that suit their interests and crush people’s aspirations. To prevent this to happen over again, mass action committees should be set up in the workplaces and communities to build the movement from the bottom up, to co-ordinate a mass political struggle aimed at bringing down the government, and to prepare the modelling of a revolutionary people’s government based on democratically elected representatives from workers, poor peasants and young people. With democratic socialist policies, based on the public ownership of banks, factories, major land holdings and utilities, a radically different future could be built for the majority.