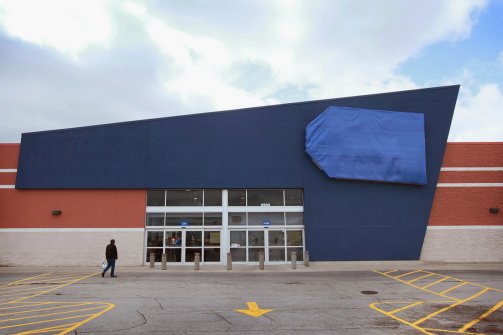 With the rise of technology, the invention of the internet, and an overall shift towards convenience, the retail industry as we know it is changing rapidly. Amazon, Jeff Bezos’ multi-billion dollar corporation, is becoming the Sears catalogue of the future. Workers are faced with uncertainty as big-box stores are replaced by websites and warehouses and jobs are lost. As wages remain stagnant and health-care costs continue to rise, this crisis leaves retail workers at the mercy of a backwards capitalist system where a few people own the majority of the wealth.

If goods are available to us through a simple click of a button, all we have to do is select “one-day shipping” to save ourselves time and a trip to the store. Big-box retail stores are quickly becoming obsolete as online shopping increases. Half of all U.S. households are Amazon Prime subscribers, with convenience at their fingertips. Rather than seeking out storefronts, retail businesses are on the hunt for warehouses to feed the supply and demand of quick and easy online shopping. Traditional retailers are struggling to compete with companies like Amazon, eBay, and Wayfair, to name a few.

As the retail industry changes, the ones who suffer the most are the workers. Retail is the most significant employer in the U.S. with an estimated 4.6 million full and part-time employees. In the past year, 89,000 jobs have been lost, plunging these refugees of the retail crisis into financial instability. While the warehouses replacing big-box stores can offer new homes to some employees, they certainly won’t make up the difference, leaving possibly millions jobless and mostly unable to support themselves or their families.

Following the end of World War II and during the post-war economic upswing, department stores were revelling in their glory. New highway infrastructure shuttled families from the suburbs to shopping malls – convenient, climate-controlled monuments to consumerism with lots of parking. However, in the wake of the Great Recession, mall visits declined a staggering 50% between 2010-13 as consumers became bargain shoppers and department store shopping was replaced with thrifting. When anchor stores like Macy’s or Sears leave a mall, the whole space can lose business. Hundreds of vacant retail stores across the country are being turned into trampoline parks and community colleges.
While there was a slight recovery after the ‘07-‘08 recession and workers see more money in their pockets as wages rise thanks to campaigns like the Fight for $15, the results are shallow. Wages are still in a long term decline which means a decline in purchasing power for a big section of the population.

The collapse of large parts of the retail sector is a warning sign for capitalism reflecting the massive growth of inequality. What was called the “middle class” in the U.S. – including big sections of the working class – is being relentlessly squeezed. This has already led to political upheaval and it will lead to a social explosion in the coming period.