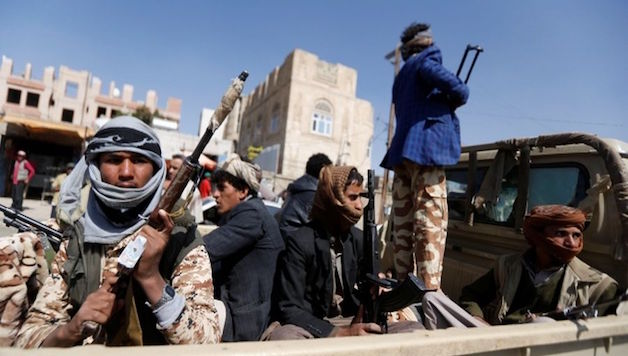 The killing of former Yemeni President, Ali Abdullah Saleh, by Houthi fighters in the capital, Sana’a, earlier this month has led to an intensification of the war in that country, magnifying an already extreme humanitarian crisis.

Tensions had been rising for many months between the Houthis and the forces allied to Ali Abdullah Saleh, organised in and around the General People’s Congress (GPC) party. These tensions were increasingly expressed in mutual public accusations and in open clashes for positions within the joint ruling bodies that the Houthis and the GPC have used to exercise power in Sana’a.

Last July, the CWI wrote that “the unity between Saleh and the Houthis is nothing but a fragile and temporary marriage of circumstances aimed at fighting a mutual enemy. It is increasingly the scene of heated tensions over state’s positions, weapons and resources, and is highly likely to break out into new clashes in the future, or even in complete turn-arounds of loyalties.” This came to ahead when on December 2, after days of fighting in Sana’a between Saleh’s loyalists and Houthi militiamen, the former made a televised speech calling on Yemenis to rise up against the Houthis, and said it was time to “turn a new page” with Saudi Arabia to end the conflict.

This was one too many volte-face from Saleh, who was killed by Houthi militias two days later. Ali Abdullah Saleh was a corrupt and brutal despot whose political career had been built on mastering the art of “divide-and-rule”, of playing different sides against each other at different times to maintain his rule. In 2014, he opportunistically sided with the Houthi rebels, against which his regime had led six wars before, in order to try and navigate his way back to power – which he had lost in a chain of events triggered by the 2011 popular uprising that took place in the wake of the so-called ‘Arab Spring’.

One reason the Houthi rebels grew to such prominence in the first place, and managed to take over Sana’a in the course of 2014, was people’s anger at the entrenched corruption and mass poverty inherited from Saleh’s 33 years of rule – and reproduced by the short reign of Abd-Rabbu Mansour Hadi, Saleh’s former vice-president, who governed the country after Saleh’s overthrow as part of a transition deal concocted from the top by Riyadh and Washington. The ultra-reactionary brand of Sunni Islam spread around for years by the Saudi Wahhabi elite, a long-time backer of Saleh’s regime, had also alienated many, especially in the Zaydi Shia heartland of the country’s north, traditional base of the Houthi movement.

Pushed into a corner after the Houthis’ takeover three years ago, the Saudi rulers, along with a coalition of allied regimes, leaned on Hadi’s exiled government and engaged in a military blitzkrieg to try and boot the Iran-backed Houthis out of Sana’a. This campaign of bombing, logistically and militarily assisted by Western powers, has provoked a large amount of civilian fatalities and obliteration of infrastructure. It continues to this day, along with a cruel food, fuel and medical blockade aimed at strangulating Houthi-held areas which has pushed millions of civilians on the brink of mass starvation.

Facing a military stalemate sucking up mountains of public money, the Saudi regime had seized on Saleh’s public turnaround against the Houthis to announce its renewed support for its “prodigal son” and his party the GPC. This was a miscalculation, as crucially, most of the powerful sheikhs and tribal leaders in and around the capital, recognizing that the tide was turning against Saleh, had largely abandoned the latter to his fate; this helped Houthi fighters seize the entire city and eliminate the ex-dictator in early December.

Whereas millions of Yemenis had braved the bullets six years ago to topple the regime of Ali Abdullah Saleh, his recent killing by Houthi militias will not bring the masses any closer to their genuine demands for change. If anything, it is likely to heighten the flames of war. Now that the Houthis are the sole rulers in the capital, and that Saleh’s death has closed the door to a political arrangement benefiting the Saudi regime, the latter is stepping up its military campaign – while the Houthi fighters are trying to push their advantage.

Yasser, a sympathiser of the CWI living in Sana’a, explains: “Both the Houthis and the Saudis will try to attack, the two parties will use this momentum for themselves: the Houthis because the morale is high among their fighters, and the Saudis because they are forced to make a move or they will lose the war. The situation in Sana’a is frightening, the people are bracing themselves for the situation to worsen”.

Among other things, the Houthis are attempting to consolidate a regime increasingly based on brutal repression. Their militias have lately been ransacking homes of any critics in Sana’a, kidnapping dissidents, and internet connection for social media has been blocked for days, limiting the flow of information to the outside. “The Houthis understand the language of weapons only. We are in a bad security situation – they arrest anybody who writes on Facebook or WhatsApp. More than 3 people are not even allowed to stay together”, Yasser says.

“The workers and poor are the main victims of this conflict – the Houthis won’t help us, nor will Hadi’s power, nor the Saudis. Whichever of the existing faction wins, the poor will lose. They struggle every day to earn a living, their future lies on the edge of the abyss.”

Indeed, none of the fighting forces in Yemen’s war has any meaningful fix to the cortege of human suffering faced by the majority of the population. Basing themselves on sectarian and tribal allegiances, and on competing capitalist powers, they all profit from the war, have all presided over atrocities, and have all a vested interest in keeping the workers, the unemployed and the rural poor into oblivion and misery.

The building of a democratic socialist force, reviving the traditions of the 2011 revolutionary movement, fighting for an end to the war and murderous blockade, uniting workers and poor around class demands, championing the public ownership of wealth, and recognising the aspirations to self-determination of Southern Yemenites, is a more pressing need than ever before.

For a more detailed analysis of the situation in Yemen, read here.