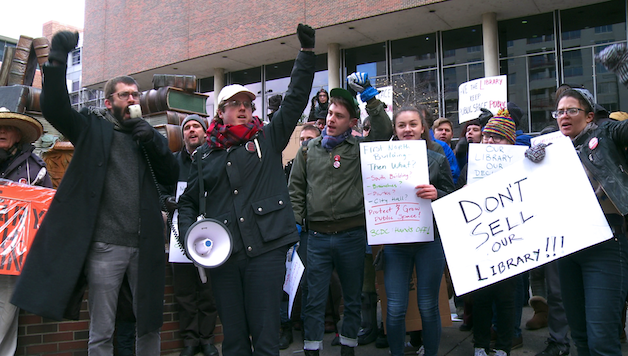 After months of pressure from the public, the Board of the Public Library of Cincinnati and Hamilton County in Ohio has caved to the demand to stop the sale of the North half of the library’s main downtown Cincinnati branch. This is a victory for the hundreds of working people who have come out to public meetings, almostly unanimously against the sale of the building, which houses crucial services like the teen Space, the Makerspace and the Children’s Library.

Cynical and hypocritical references to accessibility needs, the pitting of the branches against the downtown location and dubious promises that no services would be reduced were seen for what they really were: fake appeals to the public interest covering for the blatant grab of public space to be gentrified in Cincinnati’s “revitalizing” downtown.

Socialist Alternative played a leading role alongside the Democratic Socialists of America, the Library Defense Network and McMicken Freespace through the “Our Library, Our Decision Coalition”. This coalition held numerous public meetings, tabled on a weekly basis, collected over 3000 petition signatures and flooded every board meeting since the summer in protest of the sale. It did all of the legwork to notify the public of the potential sale, which the well connected board of developers, lawyers and bankers had hoped to pass through silently.

The spotlight that our campaign has thrown onto the board uncovered numerous other issues with the administration of the library. As a Socialist Alternative organizer put it in a recent meeting: “The sale of the North building is just the tip of the iceberg.”

A few days after a brutal public meeting where the board refused to answer public questions, two library employees were fired. One for confronting representatives from the public-private city redevelopment corporation touring the Teen Space and the other for trumped up reasons after requesting accommodations for their disability. An unpopular move to a deskless librarian model is being pushed from the top down, and employees are beginning to lose their jobs over it. An employee survey showed that only a quarter of the workers view senior leadership positively.

The second employee, Court Motley, is fighting for reinstatement. We support this fight and and the fight for the ability for others workers to speak freely about the conditions they face and the future of the library.

The library has faced cutback after cutback while Cincinnati’s economy is apparently growing. The county and city committed over $50 million towards a new soccer stadium, an amount that would almost cover all of the library system’s facilities plan. Meanwhile a growing crisis of affordability is pushing more people out onto the streets. The library is a crucial sanctuary for homeless people and teens with unstable home lives. Working people are forced to pay while the rich reip the rewards. We stopped them with the North building sale and we can build a movement to make bolder demands in the future.

Let’s be clear, taking the sale of the North Building off the table was due to the tireless work of volunteers and activists on the ground. Without the pressure of Socialist Alternative members and others this victory would not have occurred. By building movements on the ground and fighting alongside other socialist and activist groups we have seen the working class victories can occur but there is still work to be done.

They want us to go away, but the unaccountable board and administration have to continue to be confronted. It remains to be seen if there are any strings attached to the stoppage of the sale. Socialist Alternative and the Our Library Our Decision Coalition stand opposed to any measure that would reduce services or repurpose the North Building, further diminish working conditions and distract from the issues of the unaccountable leadership and fired employees.