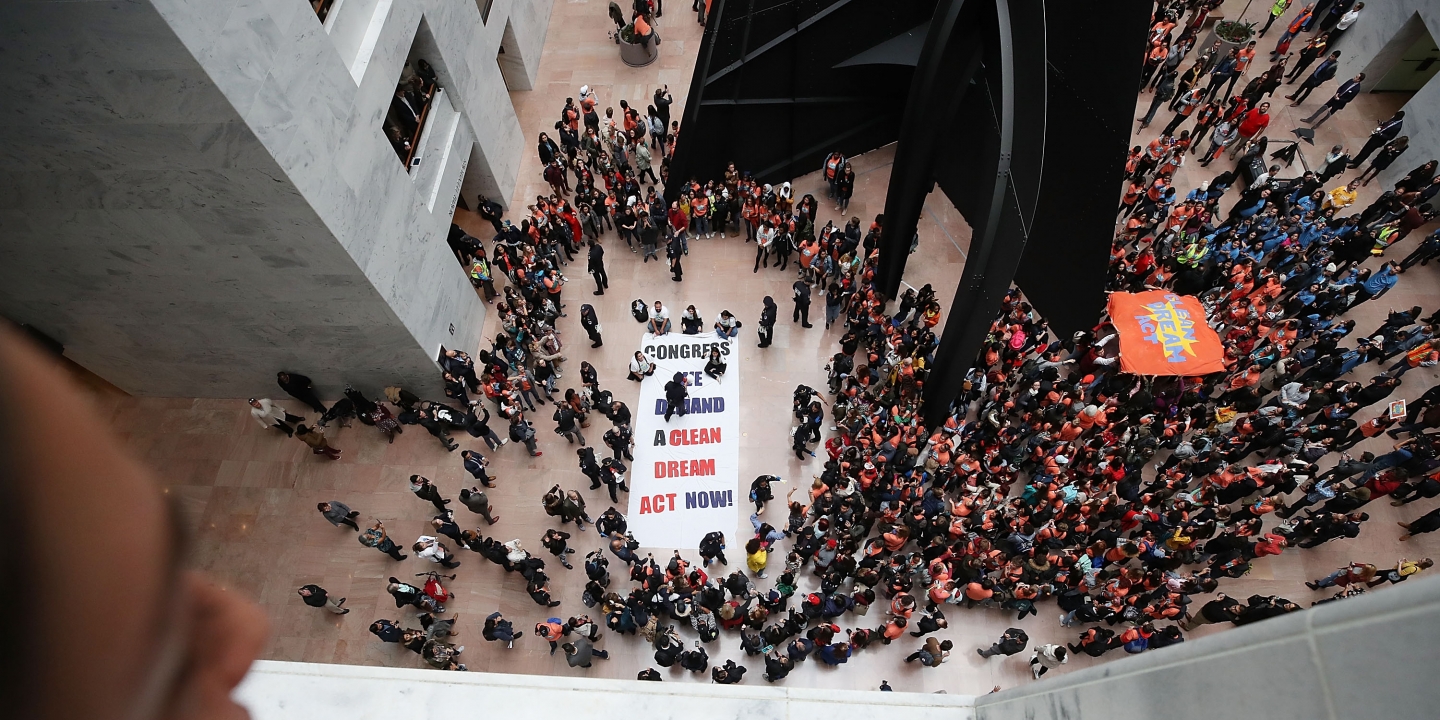 Attacking immigrants was a central part of Trump’s election campaign and has been a hallmark of his administration. In the wake of his inauguration, hundreds of thousands of people got active in fights for sanctuary cities and schools, and the Muslim Ban was met with mass opposition and protest. Now, Trump’s threat to rescind DACA through executive action – due to take effect on March 5 if Congress doesn’t act – is one of his fiercest attacks yet; 800,000 immigrant youth are under threat of losing their jobs, student loans, and health care, as well as deportation.

For hundreds of thousands of Caribbean and Central American immigrants here on Temporary Protected Status (TPS), many of whom are fleeing violence and poverty caused by U.S. imperialism, the expiration for their protected status is rapidly approaching. Trump seems happy to let it expire, but Trump’s agenda has been beaten back before. With mass mobilizations of immigrants, native-born working people, and youth – united in defense of immigrants and in opposition to Trump – DACA can be saved and TPS status extended.

Trump Under Pressure From Both Sides

Trump’s September 5 announcement ending DACA has been followed by a series of twists and turns. On September 13, news broke that Nancy Pelosi and Chuck Schumer, the top Democratic Party leaders in the House and Senate, had struck a deal with Trump to restore DACA protections in exchange for beefed up “border security.”

Anti-immigrant groups and the far right Republicans in Congress were furious. The top headline on Steve Bannon’s Breitbart read “Amnesty Don,” and Republican Representative Steve King tweeted that if the reports of a deal were true, “Trump’s base is blown up, destroyed, irreparable, and disillusioned beyond repair.”

Caving to this pressure, and in a swing back towards appeasing the anti-immigrant section of his base, Trump came out with new demands regarding the deal. In order to restore DACA protections, he demanded funding for the infamous border wall and 10,000 new immigration agents as well as cutting off federal grants to “sanctuary cities.”

However, the Republican Party remains deeply divided and figures such as House Speaker Paul Ryan do not want to head into the 2018 midterm elections amidst a wave of protest, which killing DACA would likely set off. Three weeks ago in a private meeting of House Republicans, Paul Ryan reportedly indicated that he plans to include DACA in their year-end spending bill. Trump, however, has repeatedly said this will not happen.

Now, 24 Democratic Senators and Bernie Sanders are threatening to withhold their vote for the December bill if a DACA fix is not included. If every Democrat does this, a government shutdown would occur, greatly raising the stakes and pressuring Trump and the Republicans to concede. Unfortunately, we cannot merely wait and hope for the rest to take this stand; they will need to be forced into it.

Mass Resistance, Not a Rotten Deal

Socialist Alternative and the more radical immigrant rights groups have argued against a deal done at the expense of more repression of immigrants generally. With the Republican Party deeply divided and DACA having overwhelming popular support, a mass movement that puts pressure on the Republican establishment is a much stronger guarantee than relying on Democrats’ backroom deals, which the masses have no say in.

The overwhelming majority of people support keeping DACA in place, including even 69% of Republicans. 84% of Democrats support keeping DACA, yet Pelosi and Schumer insist on limiting their strategy to making closed door deals instead of mobilizing millions. In 2006, mass demonstrations of over a million people across the country successfully stopped the viciously anti-immigrant Sensenbrenner Bill which if passed would have resulted in the biggest wave of deportations to date. More recently following the white supremacist rally and terrorist attack in Charlottesville, 67 far right rallies were cancelled after 40,000 people marched in Boston. It’s when the masses get involved that things get done.

The unfortunate truth is that the Democratic Party cannot be counted on to fight for immigrant rights. For the past decade, Democrats in Congress have not made progress on “immigration reform.” They couldn’t even manage to pass the DREAM Act when they controlled both Houses of Congress between 2008 and 2010, which is why Obama had to enact DACA by executive order. This in turn is what allowed for Trump to swiftly revoke DACA by executive order. If DACA had been passed legislatively, it would have to have been revoked legislatively. This would have forced a longer process, like over Trumpcare, and allowed time for a movement to prevent the revocation before it even happened.

Congress has managed, however, to massively increase repression and beef up the deportation machine. Between 1992 and 2009 the U.S. Border Patrol’s annual budget increased by over 700%, from $362 million to $2.7 billion. ICE’s budget has nearly doubled since its inception in 2002. And of course more immigrants were deported under Obama than under any other president in U.S. history.

If these Democratic leaders were worth their salt, they would be attacking Trump and the Republicans from all angles. They would be mobilizing the millions of people who support DACA to get organized and build for mass nonviolent demonstrations to show our strength. They would help to reactivate the thousands of groups that were formed to fight for sanctuary cities and campuses after Trump’s election. Unlike Schumer and Pelosi’s attempted deal which protected some immigrants while leaving others behind, they would demand full citizenship for all undocumented immigrants.

Say No to Divide and Rule

The right wing tries to pit native-born workers against immigrant workers, saying that immigrants are taking all the jobs. But what has caused the biggest wave of job losses in recent times? The 2008 recession, which saw 8.8 million jobs lost. This had nothing to do with immigrants, and everything to do with reckless, greedy behavior by Wall Street capitalists and their unstable system.

The right-wing media constructs this false narrative to try to prevent immigrant and native-born workers from uniting in opposition to our common enemy – the divide-and-rule bosses and capitalists. Socialist Alternative argues that all undocumented immigrants should immediately be granted full citizenship. The deportation machine should be completely shut down, with that money going towards a major a major jobs program and social services.

Immigrant workers should also be allowed to vote and be given democratic rights in the country they help make run. However, you can’t have real political democracy without economic democracy.  All workers, regardless of nationality, should make at least $15 an hour and have democratic say in how their industries and our broader economy are run, including production and distribution. Taking the top 500 corporations into democratic public ownership would ensure this could be done. But none of this will come from the Democratic Party establishment, but rather from victorious mass movements.

If the Republicans succeed in ending DACA, it would be a major blow to the immigrant rights movement and the entire movement against Trump and the Republicans. This shows the urgency for unions, civil rights organizations, Bernie Sanders, and the most prominent immigrant rights groups, such as Cosecha, to immediately call for mass demonstrations in cities across the country to defend DACA, tied to a broader message of beating back Trump and driving him out of office. If a movement is built, DACA can be saved.