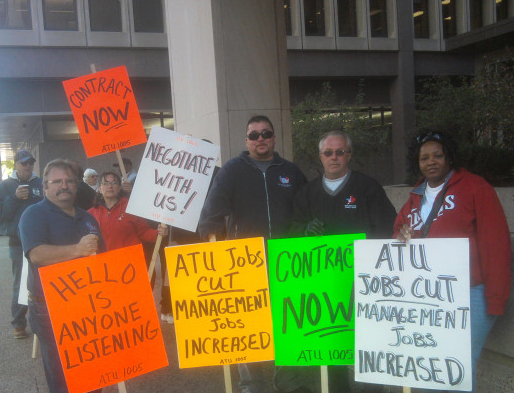 Faced with potential attacks on employee health insurance, increasing safety concerns, and attacks on funding for mass transit, members of Amalgamated Transit Union Local 1005 – with a new rank and file president – are preparing for a contract battle with the Twin Cities Metropolitan Council.

Leaders of Minnesota-based ATU Local 1005 are planning a series of actions to mobilize union members. This could culminate with a strike during the 2018 Super Bowl, which will be held at the new US Bank stadium in downtown Minneapolis. Due to the location and lack of nearby parking, extra bus and train service will be key to a successful Super Bowl.

According to activist ATU member Alec Johnson, his coworkers at the Nicollet Garage have a serious and determined attitude toward winning a good contract. “We take a strike vote on December 17. If Metro Transit and the Met Council haven’t put a serious offer on the table by then, I would be surprised if we don’t approve a strike. No real offer would be a sign they will attack us after the Super Bowl, when we have less leverage.”

Local 1005’s new president Ryan Timlin, a Socialist Alternative member, who ran unopposed, will take office just in time to bring the full weight of the 2,600 members of the Local into this battle. Timlin promises to change union by-laws to cut the president’s salary to that of the average bus driver. He plans to dramatically increase communication between leaders and members through a regular newsletter, work site meetings, and a significant increase in the number of union reps for garages and other sites.

Timlin is part of a slate of union activists that want to “build escalating actions to mobilize members to put pressure on the Met Council to negotiate and give us a fair contract.”

Members of the slate have already launched the ATU Local 1005 Action Team to mobilize members to reach out to the rest of the labor movement, community groups, and public transit riders. Timlin says, “We fully expect [the Met Council] will try to isolate us from public support, portray us as unreasonable. We won’t let that happen.”

Transit fares were recently raised, and routes cut by the Met Council, placing an even larger burden on working class riders already struggling to get by. Timlin sees riders as natural allies.

Alec Johnson, also running on Timlin’s slate, and member of Socialist Alternative, says, “The ATU local in Phoenix, Arizona used the threat of a strike during the 2015 Super Bowl as leverage to gain a good contract. But that leverage is only as good as the solidarity of our members and the support we have from other unions, the community and our riders. We plan to make sure we have that.”