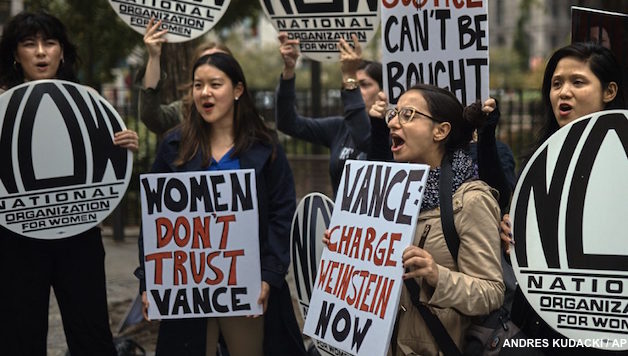 Angelina Jolie. Gwyneth Paltrow. Lupita Nyong’o. Ashley Judd. Did any women who worked under Harvey Weinstein not get attacked? Many of the millions or possibly tens of millions of women posting #MeToo on social media, asked the same question; which of us hasn’t been assaulted? Such has been the unanimity of women coming forward online. An unending torrent of revelations and discussion of sexual harassment and sexual assault has been thrown open, initially prompted by the New York Times’ exposure of star movie producer Harvey Weinstein as a serial sexual predator.

Over 50 women have now accused Harvey Weinstein of sexual harassment and/or sexual assault, widely exposing what was an open secret in Hollywood, with accusations going back to 1984. Many of us outside of Hollywood are also not shocked that one of the industries most responsible for the objectification of women is rife with sexual abuse. The exposé on Weinstein’s behavior and subsequent stream of accusations of sexual misconduct follows similar scandals around other powerful men in Hollywood and TV: Bill Cosby, Roger Ailes and Bill O’Reilly. In an economic system based on inequality and economic exploitation, these attacks are first and foremost expressions of their power over women’s lives.

The #MeToo campaign, originated by Tarana Burke, a black activist working to stop sexual violence, has become the vehicle for millions of women to express their rage at the horrific normalcy of sexual abuse and their solidarity with the victims. We are tired of not being believed, particularly when the perpetrator is rich and powerful. Women are beginning to move into struggle on women’s specific oppression in the era where a known sexual predator has been elected to the highest office in the land. Millions, outraged at Trump’s misogyny and bigotry, made the Women’s March in January the biggest day of protest in US history.

It’s not accidental that the exposure of Weinstein as a sexual predator happened as the backlash opened up under Trump. Everything from women’s rights to healthcare and abortion face new threats from a far-right Trump administration, and women are ready to forge a social movement to fight for our rights. In the 1960s and 1970s a powerful women’s movement organized campaigns of mass action to win important advances for women. Legal victories like the right to an abortion were achieved, alongside a profound shift in how women were seen in society. We need this kind of an upsurge today.

The Deafening Silence of the Establishment

More than 40 years after the heights of the second wave women’s movement, we are angry and disgusted that women are still facing pervasive sexual abuse and violence, and that an environment of sexualization and objectification of women has continued unabated. Sexual abuse is widely ignored or actively covered up as part of the cost of doing business. The director Quentin Tarantino essentially admitted as much as he expressed his regret for playing by the rules in a boys’ club ruled by the richest and most powerful: “I wish I had taken responsibility for what I heard. If I had done the work I should have done then, I would have had to not work with him.”

While Trump is generally unapologetic, the top of the hypocrisy heap is reserved for the Democratic Party establishment and its politicians who have taken Weinstein’s money for decades. Could it possibly be credible that no one connected to the Hillary Clinton campaign (for which Weinstein bundled $1.42 million in donations) or the DNC heard about Weinstein’s treatment of women? At least one politically connected Hollywood insider is alleging that she did raise the alarm within the Democratic Party about Weinstein’s behavior, but evidently that wasn’t enough to stop them from taking the cash.

Hacked emails from the Hillary Clinton campaign show that Weinstein was not only a major fundraiser, but someone who had personal access to the highest campaign officials. Weinstein gave direct advice on how to attack Bernie Sanders including the outrageous smear that the campaign used linking Sanders to the Sandy Hook massacre because of his vote on specific gun control measures. Weinstein shares a lawyer, David Boies, with Al Gore. A Financial Times article reveals how Boies prevented The Weinstein Company corporate board members from seeing Weinstein’s personnel file, presumably because it contained reams of evidence of his sexual misconduct.

Parallel to the Weinstein scandal, a frat house culture has been exposed within the California capitol building in Sacramento where the Democrats have a super majority in both houses of the legislature. 140 women lawmakers, staff and lobbyists signed onto a letter printed in the LA Times describing rampant sexual harassment and abuse, including a female lawmaker who was told that none of her bills would pass if she didn’t have sex with a powerful Democratic assemblyman. A new women’s movement, if it’s going to be a source of inspiration for youth and working class people, can’t afford leaders who only oppose gender-based violence when it is politically expedient to do so. Gender-based violence must be fought in words and deeds.

While highly paid women in Hollywood have held the headlines around the Weinstein scandal, there are millions of working class women who face persistent daily sexual harassment. In restaurants, particularly for workers that are dependent on tips for their wages, any customer can have his own personal Weinstein moment, harassing women servers who typically can’t escape the situation if they want to keep their jobs. Those low paid workers whose working conditions make them physically isolated, such as janitors, hotel maids, and farm workers are particularly at risk of sexual harassment and abuse. In one study from 2010, 80% of women farm workers said they’d been sexually harassed on the job, and a 2015 PBS documentary called “Rape on the Night Shift” dealt with women janitors who were routinely targeted for sexual assault while at work. Sexual assault on the job is underreported, particularly for low wage workers who may be undocumented and fear losing their jobs and facing deportation if they go to authorities.

The union movement could potentially play a great role in a generalized women’s movement. We need stronger unions that have workers’ backs and are willing to fight on each and every report of sexual harassment, alongside an offensive approach on wages, benefits and working conditions. The unions, because they are organizations of and for working people, should be leading the attack on workplace sexual harassment. Notably, the New York city hotel maid who went to the police in 2011, accusing former IMF chief Dominique Strauss Kahn of sexual assault, was a union worker. Unions should have campaigns educating all workers, both union members and unorganized workers, on what constitutes sexual harassment.

A workforce which is unified in opposing and standing up to discrimination based on gender and race will be able to fight the boss more effectively on all issues. The union movement could gain popular support in general by taking decisive action on sexual harassment, including the use of militant tactics. For example, unions should be prepared to call immediate strikes on hotel employers who refuse to deal with guests’ abuse of workers, or shut down Hollywood movie sets. The union of film actors, SAG-AFTRA, should be launching a thorough transformation of its approach to sexual harassment in the industry. SAG-AFTRA has apparently played no role in the outing of Harvey Weinstein, and its procedure for addressing sexual harassment complaints is to ask the production company, the boss, to launch an internal investigation!

The mass outrage expressed in the #MeToo campaign is an empowering moment for the still brewing new women’s movement. We need to move to the next step and have a self-organized women’s movement fighting with disruptive tactics to win victories. With the millions who came out into the streets the day after Trump’s inauguration, there should be no doubt that there is a powerful mass consciousness of the need to fight gender inequality. Women are rightfully angry at a lot: gender-based violence and inequality, the hypocrisy of the Democratic political establishment on sexual violence, the outright hostility towards women of the Republican political establishment, a sexual predator in Donald Trump in the White House. And the anger extends, of course, to millions of men. Attitudes on gender equality have changed significantly since the women’s movement broke out and a new women’s mass movement will have broad support in society generally. #MeToo is the latest mass women’s action in a string of events globally that points toward an explosive mood against sexism and the billionaire-dominated political establishment.

Worldwide, there is an upturn in struggle around women’s issues. In Argentina the “Ni Una Menos” or Not one Less movement has mobilized hundreds of thousands in the fight against the killing of women. Ni Una Menos spread across Latin America and served as an inspiration to the Women’s March organizers here in the U.S. A year ago in Poland, women organized a one-day general strike in opposition to a more restrictive abortion law that was being introduced by the right-wing government. The strike was successful; lawmakers were forced to withdraw the new law. In Ireland, a concerted grassroots campaign has been aimed at repealing the constitutional ban on abortion, led by Ruth Coppinger, member of parliament for the Socialist Party, sister organization of Socialist Alternative.

As capitalism pushes workers back on so many fronts around the world, a global women’s movement is emerging. A new women’s movement here must take on the issues of sexual harassment, gender based violence, reproductive rights, parental leave, childcare and the pay gap. Working class women’s needs should be at the center of a rebuilt women’s movement. Safe, decent affordable housing, higher wages, and Medicare for all are also critical demands for women, and demands that are diametrically opposed to the interests of the big business, the corporations and the political establishment. And while sections of the political establishment may pay lip service to women’s equality, they represent an economic system whose foundations are built on class, race and gender exploitation, just like the world of big Hollywood movies. Only a socialist society based on radical egalitarianism can bring an end once and for all to the reign of all the Harvey Weinsteins.