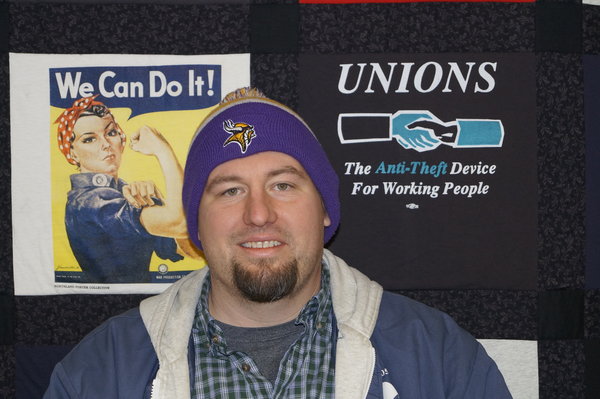 Ryan Timlin, a member of Socialist Alternative and longtime labor activist, is running for president of Amalgamated Transit Union (ATU) Local 1005, representing Transit Workers in Minneapolis. After we went to press, it became clear that Timlin is running unopposed and therefore is now the president-elect.

Following is an interview with Ryan about his activism, the local’s upcoming contract battle, and his strategy for rebuilding a fighting union.

What made you decide to run for president of your local?

We need a fighting union that can win victories for our members and our communities. For the past three years, I’ve proven my dedication and willingness to defend our members as union rep for Nicollet Garage drivers and dispatchers. I’m now ready to bring that same level of commitment to the entire membership. But more than just defense, my presidency will also emphasize the need for going on the offensive around the contract and other issues. That’s why I launched and – along with the other candidates on this slate – have begun building the ATU 1005 Action Team as a way to educate and activate more rank-and-file members around our current contract fight, with the aim of laying a basis for future united actions.

How will you run your campaign differently from previous campaigns in your local?

This is a grassroots campaign working to rebuild a fighting union that is 100% accountable to and rooted in its rank and file. As president of the local, I’ll only accept the average wage of workers in the local, and donate the rest to social justice movements. This union has a fighting history and we need to bring it back. When we go into battle, whether over a contract or other issues, we will be building maximum rank-and-file participation and democracy and fighting to win.

What is it like to be a Minneapolis bus driver? What are the main complaints you hear from your coworkers?

Well, it’s a hard job – things are hard for most working class people. But it’s also an important job, and I think we all know that and we’re proud of our work and our union. But we’re also facing increased verbal and physical assaults, it’s physically taxing work, we can’t count on wage increases or our breaks, and we’re losing too much on our health benefits.

What is your vision for how to address those complaints and win real change?

We need to push Metro to invest in a safer working environment. And you know it’s going to take organizing, it’ll take a fightback. They needs to introduce left side doors for bus drivers and work with community organizations to train all staff in de-escalation methods. And we need to stop these relentless attacks on our health benefits. Metro Transit needs to pay more of the insurance premium, not less.

Beyond our struggle for a fair contract and workplace, we also find ourselves living in a society dominated by billionaires and corporations. Like Bernie Sanders, I consider myself a socialist and see the need to build a movement of the 99% – the regular working people – against this billionaire class. Trade unions have a key role to play in this struggle, but must unite with other unions and social movements to achieve real gains. I’ve been active in the victorious 15 Now struggle, protests against police brutality, Bernie Sanders’ political revolution, union solidarity campaigns, etc. ATU 1005 has the potential to be seen as a real fighting force for all working people in the Twin Cities area. Our leadership must seek ways to build more relationships with progressive social movements that challenge the status quo, rather than simply donate to countless run-of-the-mill political candidates.

You have a contract battle coming up. What are the main issues?

With the Super Bowl coming to Minneapolis, we have leverage to fight for a good contract. The company will try to delay to avoid the threat of a strike around the Super Bowl. We should build escalating actions to mobilize members to put pressure on the Met Council to negotiate . Candidates on this slate have built the Action Team to begin educating and mobilizing our members. We should do everything in our power to prevent concessions on health care, mechanics tools or other issues. We can build rider / driver partnerships by demanding expanded affordable public transit in opposition to the Met Council’s ongoing cuts to bus routes. We need to reach out to other unions, community groups, and riders in our contract campaign and be prepared to strike to defend our living standards, the labor movement and all working people.

Austerity Budgets Are In Our Future: Minneapolis In the Wake of George Floyd

ABOUT US
Socialist Alternative is a national organization fighting in our workplaces, communities, and campuses against the exploitation and injustices people face every day. We are community activists fighting against budget cuts in public services; we are activists campaigning for a $15 an hour minimum wage and fighting, democratic unions; we are people of all colors speaking out against racism and attacks on immigrants, students organizing against tuition hikes and war, people of all genders fighting sexism and homophobia.
Contact us: info@socialistalternative.org
FOLLOW US
© Socialist Alternative 2020 | All rights reserved
138 Shares
Tweet
Share138
Pin
Share