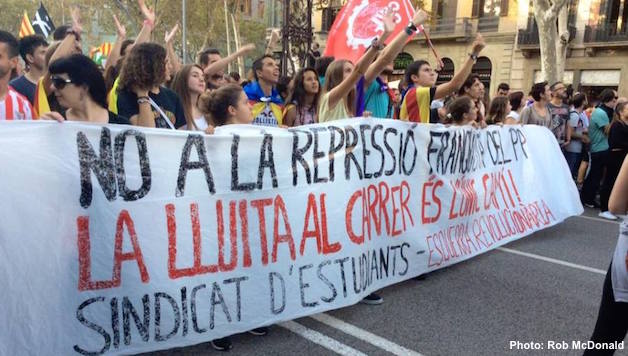 Statement by Izquierda Revolucionaria (CWI in the Spanish State)

Continue the fight until we win a Catalan socialist republic!

Catalonia experienced an historic day on October 3. Millions of workers, young people and citizens paralyzed companies, transport, education and administration. They took to the streets crying out against the brutal police repression of October 1 and threats of more violence against the Catalan people by Spanish Prime Minister Rajoy and Partido Popular (People’s Party/PP) government ministers.

The possibility of achieving a Catalan republic through the revolutionary mobilization of the masses is causing panic among the Spanish ruling class. They know that this victory would open the way to the struggle for socialist transformation of society in Catalonia and in the rest of the Spanish state.

The Catalan political crisis has been transformed into a crisis over the 1978 constitution, which motivated King Philip VI to address the “nation” on the night of the 3rd October. Would the king denounce the violence of the police and the civil guard against tens of thousands of families, elderly and peaceful people who only wanted to vote? Would he offer sympathy to nearly one thousand people injured by the repressive intervention of the Francoist regime? Would the king condemn the leaders of the PP and Cuididanos [‘Citizens’] who described the general strike and the huge demonstrations on 3 October as “Nazi” and “xenophobic”, using the language of civil war? Would the king strongly oppose suspending Catalan autonomy?

We anticipated from the beginning that the king would not do any of these things. The monarchy supported, as expected, the PP governments’ repressive policy, justifying it as the “defense of the rule of law.”

The oppression of the PP government and the State apparatus against the people of Catalonia shows their true DNA and that the legacy of Franco continues within them. And after 1 October, far from retreating, reaction has intensified its nationalist-Spanish propaganda. They present the mobilisation of 16,000 police and civilian police, and future repressive measures, as legitimate actions to defend the “law of the State”.

But by what state and by what right? What right does a government, full of corruption and thieves, who have plundered the public resources to enrich a minority, have to claim its authority to act in this way? It is the state of the bankers who have their hands full of billions of stolen euros. The “rule of law” drowns us in mass unemployment, precarious jobs, low wages and poverty and misery. The “rule of law” born of the pact of 1978, when the Spanish bourgeoisie and the leaders of the organizations of the left (PCE [communist party] and PSOE [social-democratic party],) agreed to reform the dictatorship to abort a revolutionary situation, guaranteed the bourgeoisie control through a monarchical and parliamentary regime that included many authoritarian elements.

The 1978 Constitution sanctioned many things: a King imposed by Franco; law that guaranteed the impunity for the crimes of the dictatorship and state apparatus; that the judiciary, police and military forces remained in the hands of the usual reactionaries. Of course, the economy of the “free market” and the unquestioned power of the capitalists was assumed, and the right of self-determination was refused to Catalonia, the Basque Country and Galicia. Inscribing in the Constitution is the maxim of the former dictatorship: ‘Spain, one, great and free’.

The current mass movement unleashed in Catalonia in favor of national-democratic rights has placed on the agenda a central point: the denial that Catalonia is a nation. This has been reiterated many times by the centralist ruling class and right-wing through repression or simple military conquest.

Frustration with this is now combined with widespread frustration at the consequences of years of capitalist crisis, mass unemployment, evictions, precarious jobs, low wages, and the lack of a future for the youth.

The struggle against national oppression and class oppression are intertwined, as in other times (1909, 1931, 1934, 1936, 1977), generating a revolutionary potential that has defied the forms of political domination of the Spanish capitalist regime.

The working class and the youth of the whole State must understand that the cause of the people of Catalonia is also ours. “A people who oppress another can never be free,” said Karl Marx. That is why the labor movement throughout its history always inscribed on its flag the struggle for national liberation, for the self-determination of the oppressed nations, as part of the struggle for the socialist transformation of society.

The Spanish State prepares new assaults against the people of Catalonia

On 1 October, a turning point took place in the class struggle. Not only in Catalonia, but throughout the whole Spanish state. The PP government revealed its repressive actions, extreme weakness and absolute lack of legitimacy. Attempts to mobilize their social base in the days leading up to the referendum were reduced to minority demonstrations dominated by fascist elements, singing “Face to the sun” and saluting in fascist fashion.

It is also necessary to point out the complicity of the current leaders of the PSOE with the PP to muzzle the people of Catalonia and prevent them from voting on 1 October. The intervention of PSOE leader, Pedro Sánchez, on the same day that tens of thousands of people were subjected to excessive police violence, as he cried crocodile tears over the “police charges” without even daring to call things by their right name, and then reaffirming PSOE’s unwavering support for the “rule of law, to the institutions, the Constitution and territorial integrity” i.e. to the PP government to a Spain “large and free”! This is completely politically bankrupt.

As in all the great events of history, it has been the direct action of the masses, their revolutionary intervention, which has changed the whole situation. The crisis of the Spanish political regime has entered an explosive phase. The crisis is of such magnitude that it now points towards the PP government, backed up by the reactionary mass media, staging a coup d’état against the Catalan institutions, dissolving the Catalan government and ending Catalan autonomy. Both the PP and Cuidadanos are willing to play the card of Spanish nationalism and to encourage polarization in society along national lines, using in abundance reactionary demagoguery against Catalonia and the Catalan people. Albert Rivera [leader of Cuididanos] considers this situation a golden opportunity to wrest an important portion of the PP’s social base, and therefore he cries out for the application of Article 155 [which allows for direct rule from Madrid in Spain’s autonomous regions] to close the door to any negotiation with the Generalitat [Catalonia regional government] and increase repression. This strategy puts a lot of pressure on the PP, which cannot give up its more reactionary and far-right base.

We must respond with massive mobilization. For the Catalan socialist republic

The 3 October general strike has shown the enormous strength of the movement. Yes, we are so strong that we have made possible what seemed impossible weeks ago: to defeat the repression of the PP and to win the active solidarity of the most advanced sectors of the working class and youth of the Spanish State and of the whole world. But now we have to carry out a strategy to achieve victory. That requires organization and a revolutionary program.

From Izquierda Revolucionaria we call on the leadership of the CUP [Popular Unity Candidacy], Podemos [“We can”], Catalunya in Comú [The Commons] and ERC [Republican Left of Catalonia] to establish a fighting combative left front, which is based on the Defence Committees of the Referendum (CDR) and all organisations that have been emerging in the recent weeks in Catalonia. These should organize ‘committees for the republic’ in all centers of work, and coordinate amongst themselves defending a working class alternative – internationalist and revolutionary – that drives mass movement with increasingly bold and massive actions. We say clearly that the left front must maintain a policy of class independence, must break any subordination to the nationalist bourgeoisie, the PDeCAT [Catalan European Democratic Party] and Puigdemont [Carles Puigdemont, the president of the Catalan Generalitat].

We cannot forget that even now they suffer the reactionary onslaught of the PP, these politicians have applied savage social cuts that have caused immense suffering, defend their own privileges and very concrete class interests: those of the economic elite. We cannot rule out that these bourgeois leaders, as they have done in the past so many times, again betray the aspirations of the people and try to agree to beneficial outcome for themselves with the State and the PP government.

The left that fights, the labor movement and its working class unions in Catalonia – we must build this left front and offer a solution in favor of the oppressed in this revolutionary crisis. This needs to deepen and extend the struggle, preparing an indefinite general strike in the workplaces to resist any violent repressive action by the State, to force out the repressive forces of occupation, and to win the Catalan republic with a left government in the leadership.

That left government should rapidly carry out a program to solve the serious problems of the population; immediately ending the cuts, guaranteeing quality public education and health, creating millions of jobs with a living wage and labour rights, ending evictions with a plan for public housing and social rented accommodation. This government should confront the dictatorship of the great economic powers by nationalizing the banks and the big companies, in order to place wealth in the service of the needs of the majority of society.

A Catalan republic won by the revolutionary action of the masses, necessarily involve fighting PdECAT and Puigdemont, against the whole political and economic oligarchy that has ruled Catalonia applying the same neoliberal policies that the PP has done, and open the door to fight for the socialist republic in Catalonia and a federal socialist republic based on the free and voluntary union of the peoples and nations that currently make up the Spanish state – this would win the active solidarity of the oppressed masses of Europe and the whole world.