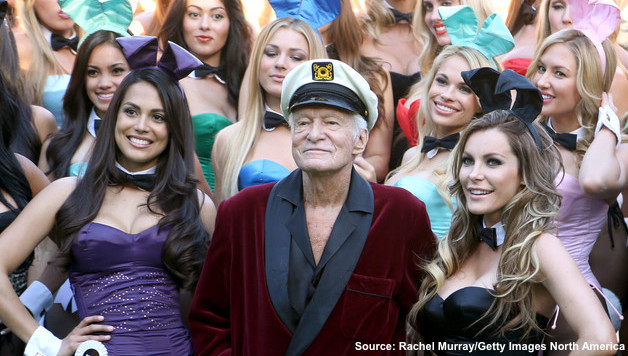 Originally published by the Socialist Party of England and Wales.

In the film Men in Black the eponymous characters press a button and erase your memory. Reading the obituaries about the death of Playboy founder and multi-millionaire Hugh Hefner certainly felt like such a button had been pressed as the writers of many of these articles fell into a state of collective amnesia.

The articles overflowing mainstream media about the death of the notorious Playboy brand boss depicted him as a positive example of a successful businessman (which technically he was) and as a:

Women – not here for his pleasure

Hefner described himself as a “feminist before feminism was even a thing”. It is misleading to suggest that the women’s movement was merely about ‘sexual liberation’. And the liberation that women were fighting for was on their own terms and precisely the opposite of what Hefner produced in Playboy – which reflected his own very narrow ideal of what women should look like and how we should act. Hardly a celebration of female sexuality! He added to the perception of women’s bodies as objects; that our existence is reduced to the size of our breasts and in the service of men.

Criticisms published in the press

Fortunately, since his death not only glorified obituaries hit the press. Many also published analysis pieces and reports with very important first-hand witness statements.

Highlights of these include a journalist’s undercover research as a Playboy Bunny. Amongst the things described in her story is the obligatory smear test for Bunnies (technically a waitress job) and the tightness of the obligatory corsets Bunnies had to wear (you shouldn’t catch a cold because they would break with a sneeze).

The memoir of a former Playmate and Hefner’s ex-girlfriend describes the Playboy Mansion as a place where the girls were constantly competing with each other. This was evident also in the reality TV show “The Girls of the Playboy Mansion” where it’s all about who gets on Hef’s good side .

Not only that but girls were also denied their “allowance” if the Playboy boss thought they broke a rule or felt dissatisfied by something they’d done (including not wearing matching pyjamas)! It’s been revealed that the girls in Playboy Mansion were living under a curfew regime and were pretty much obliged to have sex with Hefner without any protection (and he would never get tested for STDs)!

Were they forced to?

Part of sexist propaganda against women today is about the illusion of ‘choice’ – that women have liberation now and so can choose whether to become a Playboy, for example.

This doesn’t take into account financial pressures on women and the huge amount of pressure within society to conform to certain behaviour and appearance; nor the power imbalance in the type of relationship between a multi-millionaire like Hefner and the women he exploited.

A stalker even in death

Marilyn Monroe was Hugh Hefner’s first ever cover-girl. He used to call her the ultimate blonde. They never met. However Hefner bought for $500 some pictures she shot before she was famous for which she received at the time $50.

He basically “leaked” those pictures in the first issue of Playboy and became an instant celebrity. She got no compensation and had to apologise for them and the whole thing almost cost Monroe her career. Now she can’t even get away from him in death as he bought the crypt next to where she’s buried, stalking her in death after having exploited her in such a way in life!

A successful son of the American Dream

It is no surprise to see praise in the mainstream media of Hefner and his lifestyle. He made a fortune – a personal value in itself in a world where being rich is seen as the ultimate goal.

The so-called American Dream is all about how if you “work hard” and are “smart” enough you can even become a multi-millionaire. Hefner made the dream come true for him but it was by exploiting women and by applying business practices very similar to all the horror stories we read about wages and conditions in the hotel and restaurant business – you won’t be surprised to read what the tip regime in Playboy clubs was, for example.

Lured into the job with promises of getting a break into show biz, who knows how many hundreds, if not thousands of women were used so that Hefner could elevate his status in capitalist society and fatten his wallet.

Socialists can’t fight against capitalism and its exploitative nature without fighting against all forms of oppression including fighting for women’s rights and women’s liberation. Women in the US are fighting the sexism of Trump, which is little different to the sexism of Hefner.

It is damaging to suggest that Hefner was a feminist or a progressive political activist; “Social progress is measured by the position of women in society”. We need a united movement to ensure that women’s position in society is improved and so that we can achieve genuine liberation for all.