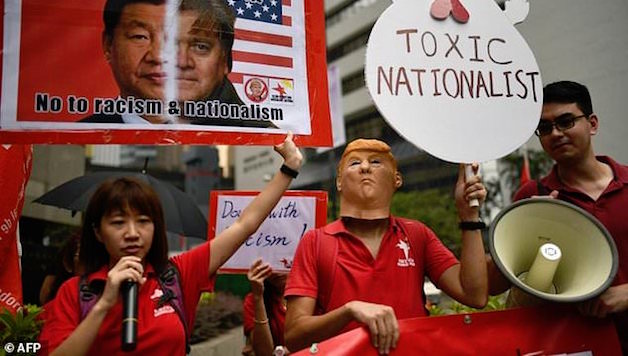 “Solidarity with anti-Trump and anti-racist protests in USA!”

Steve Bannon, the former “chief strategist” and far right guru of US president Donald Trump, delivered a speech in Hong Kong on 12 September as the guest of a Chinese government-owned company, CLSA / Citic Securities Co.

Socialist Action (CWI in Hong Kong) together with the League of Social Democrats and Refugee Union staged a protest in solidarity with the millions in USA who have marched against the racist, anti-women and anti-labour agenda of the Trump government. Former legislator and veteran Hong Kong democracy campaigner Leung Kwok-hung, also known as ‘Long Hair’, took part in the protest outside the conference venue in Wan Chai.

Bannon was, until his dismissal a few weeks ago, a top advisor to the president. Among other things he was the architect of Trump’s racist ‘Muslim ban’ to ban travellers from seven Muslim-majority countries, which was defeated by mass protests and legal challenges.

Bannon is executive chairman of the racist and sexist Breitbart News, which he boasts is “the platform for the alt-right”. Trump and Bannon’s racist policies have led to an upsurge in neo-nazi white supremacist violence – as seen in the horrific Charlottesville terrorist attack against anti-racist protesters. Tens of thousands have marched in American cities like Boston in recent weeks to condemn the extreme right threat.

Bannon is also well known for advocating an “economic war” with China and even predicting a US-China war in the South China Sea “in five to 10 years”. Our protest is also to warn Hong Kong people that Bannon’s opposition to China is purely nationalistic and has nothing to do with support for democratic rights or opposing the CCP dictatorship and its hardline repression.

Bannon is an admirer of authoritarian politicians like Putin in Russia and Le Pen’s National Front in France. Bannon strongly opposed the US ‘Occupy Wall Street’ movement and even made a film attacking it. Hong Kong people, especially young people, know that the Occupy movement in America was a source of inspiration for our own Umbrella Movement to fight for democracy.

A statement by the protesters included the following: