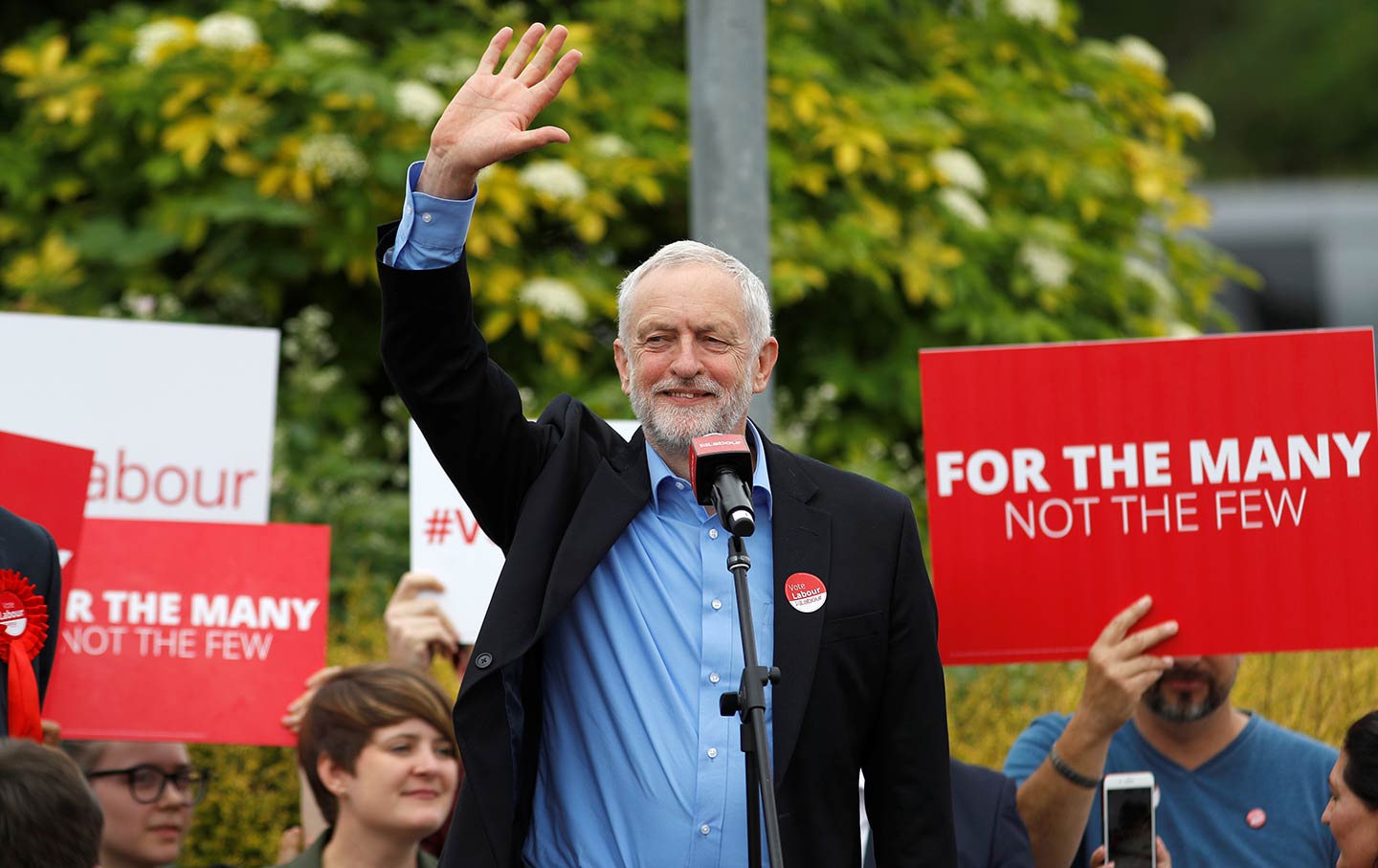 Jeremy Corbyn, the left-wing leader of the British Labour Party who is often compared to Bernie Sanders, came out of the recent U.K. election as the biggest winner. Here are five lessons for the U.S.

1. The world has changed.

On June 8, British politics was turned upside down. Theresa May, the Conservative Party leader and current Prime Minister, had called the snap election on a gamble that she could win a stronger mandate for her conservative agenda.

Instead, her party lost seats while Corbyn’s party received 31 more seats with 40% of the vote, up from 30% in the 2015 general election before Corbyn was leader.

Youth turnout increased from 43% in 2015 to 72% in this election, and 65% of them voted for Corbyn. Labour won 12.8 million votes, the most votes since Clement Attlee was elected prime minister in 1945.

The establishment that viciously opposed Corbyn is making all kinds of excuses to explain this election, but, in his election night speech, the Labour leader himself summed up why he did so well: “People have said they’ve had quite enough of austerity politics.”

When the election was first called, it was predicted that Corbyn would be crushed. Polls in April had him below 30%. Theresa May announced she wouldn’t even campaign.

From April to June, Corbyn gained 13 points in polls – in spite of a wave of horrific terrorist attacks, which typically strengthen the right wing. He also overcame a concerted campaign by the establishment, the mass media, and even leaders of his own party against him, his leadership, and his policies.

3. The key reason Corbyn did so well was that he offered a bold, coherent, and radical anti-austerity, pro-worker platform Corbyn didn’t just say, “I’m not Theresa May.”

His election manifesto offered a clear and coherent left alternative spelled out in specific policy proposals: a £10/hour minimum wage, big tax increases on the rich to to pay for health care and public services, abolishment of tuition fees, increased rights for workers, and renationalization of the railroads and postal service.

The manifesto was a huge break from the austerity policies that have dominated Britain for the past three decades. The establishment ridiculed Corbyn’s manifesto, but his popular policies tapped into the anger of young people and workers.

The Socialist Party of England and Wales, the sister organization of Socialist Alternative, said from the start of the election that “Corbyn can win with socialist policies.”

The result was a huge confirmation of our perspectives and approach. Our comrades have now called for a bold program of action to mobilize youth and workers behind a strategy to bring down the extremely weak Tory government as soon as possible and to bring to power a Corbyn-led Labour government on socialist policies.

4. When the left offers a bold alternative to the politics of the establishment, racism can be pushed back.

Corbyn’s surge in support also helped wipe the racist UK Independence Party (UKIP) off the map. UKIP’s vote collapsed from 12.6% in 2015 to under 2%. Part of this vote went to Corbyn.

This comes just a year after UKIP played a big role campaigning for Britain to “Leave” the EU, otherwise known as Brexit. At the time, we argued against all those on the left who interpreted the vote as a right-wing shift in British society.

In reality, the “Leave” vote was primarily a revolt against the establishment. But, because the left broadly supported the establishment’s “Remain” campaign, the right was able to capture the anger at the bosses’ EU and give it a right-wing coloring. The Socialist Party supported a “Leave” vote on a pro-worker, left-wing basis, defending immigrants and connecting our stand to fighting the Tory government, austerity, and for a socialist Europe.

Corbyn’s success on June 8 shows that when offered a radical, coherent, left-wing choice, a section of workers can be won away from right-wing populism.

5. This is just the beginning and we need to get organized for the battles ahead.

In the U.S., there is a strong mood among young people, progressives, and workers for unity against Trump, racism, sexism, and the right wing. At the same time, there are real differences between Sanders and the Democratic Party establishment over how to fight Trump. Like Corbyn, Sanders has fought for a radical program that speaks to the needs of working people.

There are similar divisions in the Labour Party, although the history of the two parties is very different. The establishment wing of the Labour Party – often referred to as “Blairites” after former Labour Prime Minister Tony Blair – supported the Iraq war and austerity, and they viciously oppose Corbyn’s leadership.

Yet when they last led the party, the pro-corporate Blairites received 10 points and 3 million votes fewer for Labour in the 2015 general election.

In 2018, the Republicans would need to lose 24 seats to be denied another majority in the House of Representatives. Right now, it looks like the Democratic Party establishment is content to run another pro-Wall-Street, Clinton-like campaign. The establishment Democrats are more interested in defending their billionaire donor base and the capitalist system than risking galvanizing the anger of wide layers of working people and raising expectations.

Both the U.S. and Britain face a historic crisis of capitalism. Through further attacks and by fighting against the idea that society can be organized to meet the needs of all, big business will use all its power to make us pay for the crisis of their system.

This will find a reflection in further bitter battles within both Labour and the Democrats and the growing left-wing insurgencies led by Bernie Sanders and Corbyn. Splits in both the Democratic Party and the Labour Party are inevitable and reflect the bigger intractable struggle between the working class and the billionaire class. Socialist Alternative has explained that it is highly unlikely the Democratic Party can be reformed and that a new party will be needed.

Crucially, we need to get organized to win. We need mass movements to resist right-wing attacks and to demand the change we need. Ultimately, working people need our own mass movements, organizations, and political parties independent of, and wholly against, pro-capitalist politicians and the billionaire class.