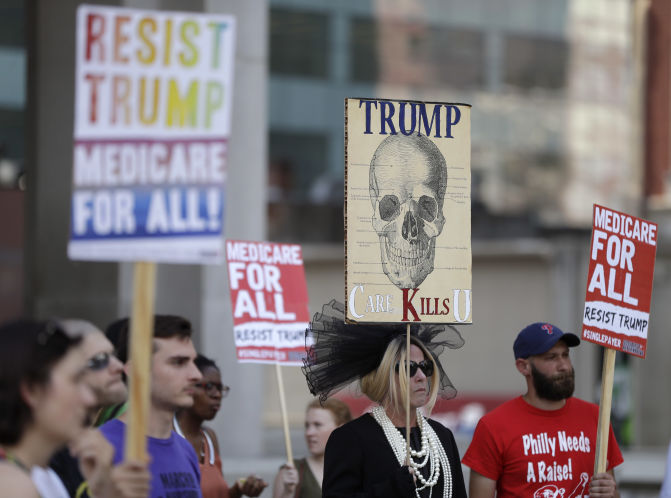 JUNE 30 – After weeks of secret backroom plotting, Mitch McConnell brought forth the Senate Republican version of Trumpcare which was supposed to be much improved on the House version, derided even by Trump as “mean.” But as we predicted the Senate bill was always likely to be just as savage. This has now been completely confirmed.

The non-partisan Congressional Budget Office estimates that 22 million would lose their health insurance over the next 10 years under the Senate plan, as opposed to 23 million under the House plan. Furthermore, they estimate that the destruction of Medicaid will go even further in the Senate plan with funding declining 35% over the next 20 years compared to Obamacare!

Trumpcare, if passed, would be one of the most vicious legislative attack on working people and the poor in decades. Trumpcare’s defunding of Planned Parenthood for a year is also a savage attack on women, especially poor women. Besides hatred and contempt for poor people generally, the Republican leadership and their corporate backers salivate at the prospect of a massive transfer of wealth to the rich. Obamacare, despite its many flaws, represented a transfer of wealth to the poor and the working class, particularly because of the extension of Medicaid which now covers one in every five Americans.

Trumpcare Down But Not Out

The good news is that Trumpcare is in trouble. A number of Republican Senators are afraid of facing their constituents or trying to get re-elected particularly in states which have benefited from the extension of Medicaid. This includes states facing the devastating opioid epidemic whose treatment costs are covered disproportionately by Medicaid. There are also right wing ideologues who view Trumpcare as not going far enough, calling it “Obamacare lite.”

But most of all Trumpcare is in trouble because it is so deeply unpopular. One poll showed support for the Senate bill at 12%! For the first time ever, more than 51% of Americans now have a favorable view of “Obamacare” according to the Kaiser Family Foundation.

As a result, McConnell was unable come up with enough votes for a procedural issue to allow the bill to go to the floor for debate and a vote. Senators now go home for the July 4 recess to get a well deserved earful from furious ordinary people. But McConnell will continue in the coming days and weeks to try to buy more votes to get this over the line. As disastrous as Trumpcare could prove to be electorally for the Republicans in 2018, not repealing Obamacare would also be a major political setback after seven years of ceaselessly promising to do just that.

Beating back this bill would strike a blow to the whole Republican reactionary agenda. But if it goes down, it will be no thanks to the corporate leadership of the Democratic Party which has refused to mobilize working class people in the streets to stop it and which also refuses to support Medicare for All which is the real way to begin solving the health care crisis (see accompanying article).

Bernie Sanders has shown the way by recently holding rallies in Ohio, Pennsylvannia and West Virginia to pressure key Republican Senators. He has also promised to put forward a Medicare for All bill in the Senate. His position has growing support in the left of the party with Senator Elizabeth Warren now also coming out in support of Medicare for All.

But there is still time for a more serious mobilization. We call on the Democratic Party leadership, on the unions, Planned Parenthood, the AARP and civil rights organizations to call massive demonstrations in early July to bring maximum pressure to bear on the Republicans.
As we go to press, Bernie Sanders’ Our Revolution, the Democratic Socialists of America and other groups have called for peaceful sit-ins at Republican senators’ offices on July 6. Socialist Alternative backs this call 100%; we are also planning protests for the week after the Senate returns.

We must also keep the pressure on to win state based single payer which would be a massive step towards a national Medicare for All system. In New York, we recently occupied the office of Democratic State Senator Simcha Felder whose sole vote prevented a single payer bill from going to Governor Cuomo’s desk. Likewise protests continue in California against the attempts of the corporate Democratic leadership to kill SB 562 which has majority support in both parts of the state legislature and overwhelming support from ordinary people.

The time is now to deal Trump and the Republicans a decisive defeat and throw Trumpcare in the trash where it belongs.