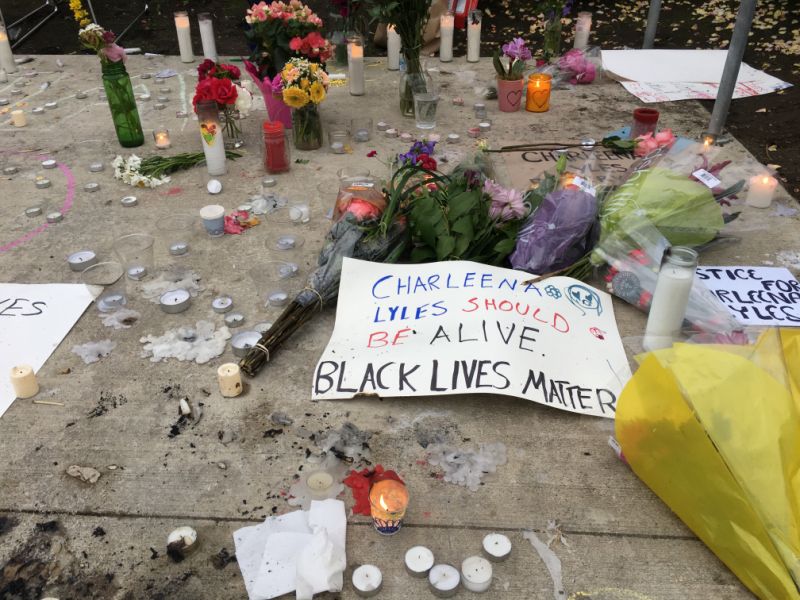 Below is the text of the leaflet Socialist Alternative members have been handing out at solidarity rallies for Charleena Lyles and Philando Castile. Download the national leaflet here, and the Seattle specific leaflet here.

After 3 years of continual protests, police continue to murder black people and avoid jail time. In addition to police brutality, the black community faces disproportionate levels of unemployment, less access to services, and lower wages. The racist police murders and acquittals are part of a systemic problem that needs to be addressed with a mass protest movement and clear demands for justice.

Philando Castille was gunned down in July of last year, and his killer will see no serious repercussions for his actions. Within days of the announcement of this injustice, Charleena Lyles, a pregnant black woman was killed by Seattle police in front of her children after calling the cops about a burglary.

In order to get justice for Charleena, we can’t allow the police to investigate themselves or put trust in a political establishment that covers up for killer cops. We need an independent investigation, including a hearing where community members can confront the police chief and other top cops in full view of the public. This could lay the basis for establishing an elected civilian review board, with representatives from grassroots community groups, with full power over the police.

Charleena lived in an area where the Seattle political establishment wanted to build the most expensive police station in the country. This proposed police station – in reality a militarized bunker – was stopped by community campaigning, direct action, and the involvement of Seattle City Councilmember and Socialist Alternative activist Kshama Sawant.

The victory against the police bunker in Seattle shows that grassroots movements can overcome racial injustice, but we need to do more than just protest at the latest outrage. We need to organize sustained coalitions that build community support around the issues that people face every day like schools closing, low wages, rising housing costs, lack of access to health care, and daily police brutality. The entire movement against Trump needs to unite with the struggle against racist policing. From Pride parades to union rallies and women’s rights protests, we must link up our struggles to defeat Trump and the racist, bigoted agenda of the billionaire class.

Political candidates with experience in the black freedom struggle are emerging throughout the country. We need elected representatives that help build our grassroots movements and are independent of the corporate establishment that protects killer cops. We need more independent candidates like Nikkita Oliver who is a Black Lives Matter activist running for Mayor in Seattle and refuses to take a dime in corporate cash, builds grassroots movements and has a concrete platform of demands to dramatically improve the lives of working people. Ginger Jentzen, a Socialist Alternative member, is another great example of an independent candidate for City Council in Minneapolis who immediately reacted to the acquittal of Philando’s killer with a call to protest, helping build the movement for independent politics.

Other activists against racism are running for office throughout the country with good demands, but are mostly running as Democrats. In every major city throughout the country, institutional racism runs rampant, and the corporate-controlled Democrats have done too little to change this. We need a discussion in our movements about the need for an independent force – an independent party of the 99% – that helps build a determined struggle against racism, economic injustice, and ultimately the capitalist system that is at the root of these problems.

Racism, sexism, poverty, and environmental destruction are all built into the foundation of capitalism, a system that is based on exploitation. In housing, healthcare and other aspects of our daily lives, it is clear that the “free market” has failed. We need to democratically control and publicly own the top 500 corporations to meet the needs of everyone instead of the wealthy few. Working people have the potential power to challenge and end this rotten system with systematic grassroots organizing, mass mobilizations, and strikes. Join Socialist Alternative in the struggle against racism and capitalism!